March provided television viewers and streaming platform binge-watchers another heavy dose of Trump hate. At least another 40 separate entertainment programs, on major networks, cable TV, and popular streaming platforms continued their vicious anti-Trump propaganda. What once might have been shocking is all too commonplace for a media in the later stages of Trump Derangement syndrome.

The past month’s bitter anti-Trump content doubled down on slamming the president once again as a “traitor” and his supporters as his “hench-characters,” in spite of the Mueller Report’s official findings that there was no Russian Collusion.

Talk show hosts referred to Trump supporters as “faux-Christians” who have no sense of charity, Nancy Pelosi was honored at a VH1 awards show for fighting America’s “old white men” leadership, and Congresswoman Ocasio-Cortez smugly described the men skewering her dumb and dangerous policy ideas as “weird” and of course “obsessed with” her.” All in all, March showcased a perfect cross section of the left’s current intimate relationship with mental illness.

Here are the worst from March:

The conclusion of the Mueller Report was a dizzying day for progressives who had spent the last two years putting all of their faith in the fact that Trump had conspired with Russia. In their minds, as long as the investigation existed, their was  hope that criminal Trump would be taken away in handcuffs at some point. HBO’s Bill Maher was one of the biggest buyers of this fake news BS, so much so that when the day of reckoning happened, he insisted that the special counsel’s word, the very thing he devoted unflinching faith to, couldn’t be right.

In one of the most unhinged, and ridiculous late-night soundbites in memory, Maher claimed during Real Time: “I don’t need the Mueller report to know he’s a traitor. I have a TV.” Maher’s denial was so strong he was willing to believe fully-discredited CNN’s false narrative because it was easier than the truth. Sad!

So far, Hulu’s new series Shrill is an ode to the powerful feminist in all women. And of course, what could be more female-affirming than taking up the brave task of getting an abortion to keep your professional and social life on the up & up? In a massive F you to the pro-life movement and traditional values, the main character (played by SNL’s Aidy Bryant) is shown undergoing the abortion procedure while uplifting music is played in the background.

And if that’s not shocking enough, it’s the feel-good speech Bryant’s character gives following the operation that’s the most unnerving. She tells her best friend, “I made a decision, only for me, for myself, and I got myself out of it. I don’t know. I feel very fucking powerful right now. And I just feel like I need to go out.” Yeah there’s nothing quite like that post-abortion night of wild abandon. It’s truly sickening.

This scene was quite a doozy. Clearly show writers for CBS’ The Good Fight have some psychosis-inducing Trump anger, as their network syndicated program went the full nine in depicting how sensitive lefties deal with living in a Trump world. In one of the show’s most bizarre sequences, character Diane Lockhart — after finding out that her husband has been hired by Trump’s sons as their personal safari guide — goes into a hallucinatory state where she’s haunted by the voice of the president speaking to her in the night.

The lady lays in her bed, undergoing fits of rage and terror upon hearing the Trump’s mocking words reverberate around her. In her scorn, she tells the disembodied voice, “God, I hate you. I don't believe in hell but sometimes I wish people like you ended up there.” Diane also skewers Kavanaugh in her paranoid rant, adding, “When did Trump and Kavanaugh become our idea of an aggrieved man, quivering lips blaming everyone but themselves?” 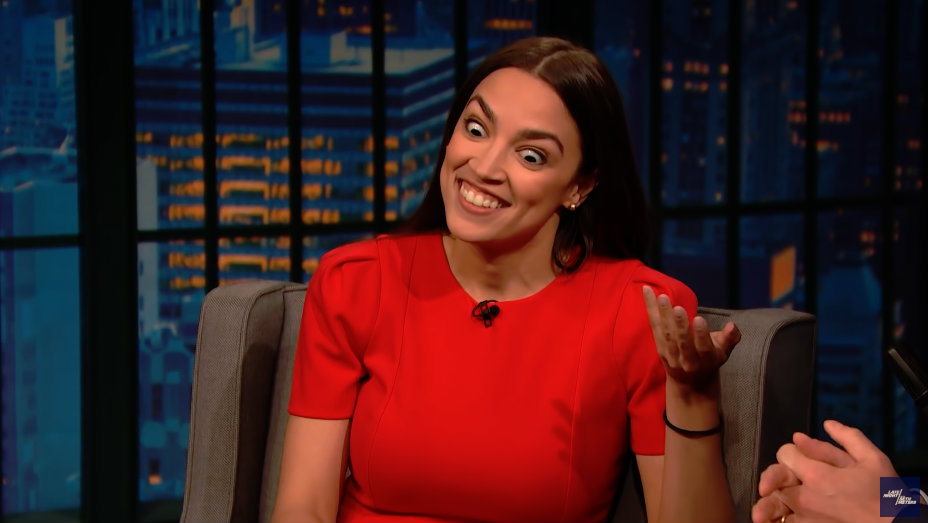 Look we know Hollywood is no fan of the current men of the GOP, nor of the heroic men who built this country and its rich history. For them it can all go kaput. It’s one thing for celebs to rant about such things, but it’s a whole other to put on a public awards show where you award Nancy Pelosi for undermining the agenda of such men. The once popular cable music video network aired the ‘Trailblazer’ Awards in March and gave the distinction to Democratic Leader Nancy Pelosi.

Super insane lefty and Trump hater Cher presented the award for Pelosi, skewering all the great men in America’s past and honoring Pelosi for her contributions in tarnishing those reputations. On stage the singer stated, “Since the day our founding fathers signed the Declaration of Independence, our country has been run almost exclusively by old white men. Thankfully, because of Nancy and other strong women, this is changing.”

Democratic Congresswoman Alexandria Ocasio-Cortez certainly gets alot of attention. While it's mostly due to the  undeniable viral quality of her harebrained political schemes, she is vain enough to think that sleazy Republican men just can’t get her off their minds. Discussing the phenomenon with late-night host Seth Meyers, “Alex from the Bronx” called it “weird,” adding the question, “Like, why are so many grown men just obsessed with this, like, 29-year-old?”

Methodology: MRC Culture compiled a list of anti-conservative/anti-Trump television programs during the month of March via MRCC's ongoing TV blog, and other notably biased clips from the month found online, including late night talk shows, network sitcoms, and shows from popular streaming services.