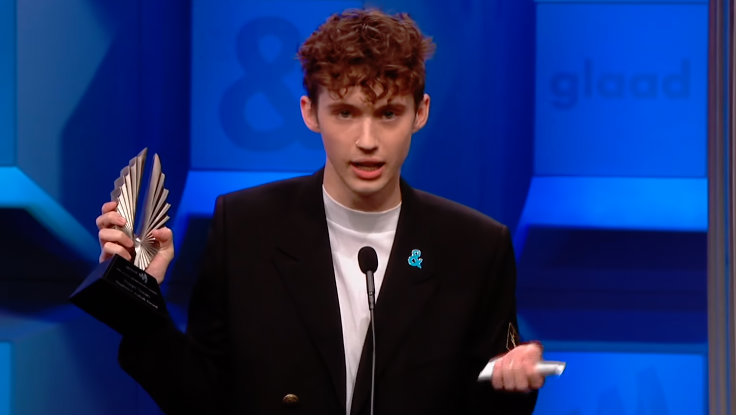 Of course all the gayest staples were present in terms of movies and TV shows. Gay teen dramedy Love, Simon rounded out the list for “Outstanding Movies,” while Will & Grace, Modern Family, and Dear White People were listed as contenders for the TV nod. My money’s on Will & Grace for it’s very flam rendition of our 16th president, “Gaybraham Lincoln” and his “Lincoln log.” Really.

GLAAD is tipping its fabulous hat to our nation’s illustrious news organizations for their tireless flacking on behalf of the gay agenda.

GLAAD flung several “Outstanding TV Journalism” by a “Newsmagazine” nominations at major networks. Two went to CBS for its lefty, pro-gay reporting. One nom was for the CBS Sunday Morning segment “Conversion Therapy: God Only Knows.” The other was for Gender: The Space Between on CBS News. ABC also got a nom with its coverage of impoverished children growing up in America.

For “Outstanding TV Journalism Segment” (a separate category, mind you) CNN received two nods, one for a special on and Mike Pence-hater and Winter Olympian Adam Rippon, and another for Don Lemon’s “Same Sex Couple Reacts to Supreme Court Ruling.” Lemon, a gay man who long ago gave up any pretense of neutrality about, well, anything, is a perennial nominee and frequent GLAAD Awards winner. In the same category, NBC Nightly News got some love for their informative segment, “Historic Number of LGBTQ Candidates on Ballots this Year.”

When it came to “Outstanding Newspaper Article,” The New York Times received a nomination for reporting on a man being barred from disability insurance after taking anti-AIDS drugs, while the Washington Post was honored for its story of homosexuals in Brazil terrified of a Bolsonaro presidency.

There were several other journalistic categories, with the most notable nominations among them including the Daily Beast and Buzzfeed for the “Outstanding Digital Journalism” categories. That should clue you in on what kind of high standard GLAAD’s working with.

GLAAD didn’t forget its friends on the talk shows. In the “Most Outstanding Variety or Talk Show Episode” category, John Oliver’s nasty Easter-themed slam “Mike Pence and 'A Day in the Life of Marlon Bundo,’” was featured. The ever classy Samantha Bee got a nod for her “Trans Rights Under Attack,” segment. The Late Show host Stephen Colbert was honored for his piece on the evils of conversion therapy.

The winners will be announced at the 30th Annual GLAAD Media Awards on March 28.