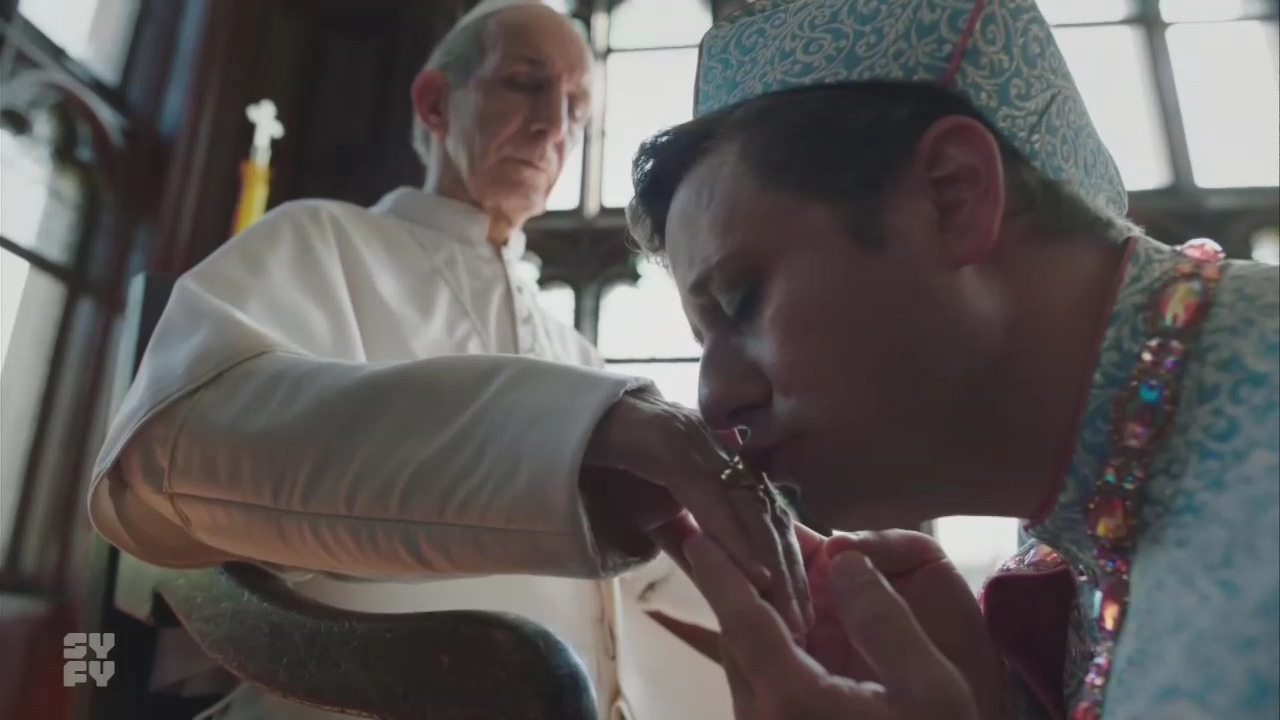 The holiest time of the year doesn't provide a break for Christians from Hollywood's anti-religious bias on TV. If anything, it makes it worse.

One way they like to tweak conservative Christians is with the LGBT agenda. Showtime’s Shameless had a major character referred to as “Gay Jesus” heading an underground religious movement. Hulu’s I Love You, America with Sarah Silverman imagined a foul-mouthed pansexual Jesus. Facebook’s Queen America attacked Christians for “bullying the gays.” On CBS’s God Friended Me the reverend preached, 'I saw God' in his daughter's homosexual journey. NBC’s Rise implied a Catholic dad was "afraid" of the controversial school play because he’s secretly gay.

They also love to insult and twist scripture. In the second season of Netflix’s F is for Family, the dad cursed at God, complained about the Bible's "bullshit stories," and said of the Eucharist, “No offense, but Your Son, He tastes like shit!” The CW’s Crazy Ex-Girlfriend called the Bible “the greatest fairytale of all time” and said there was “room for improvement.” Hulu’s The Handmaid’s Tale twisted scripture to condone child brides and wife beating in the name of God. Meanwhile, Netflix’s Chilling Adventures of Sabrina was all about witchcraft and the occult.

And those were all the shows that DIDN'T make the list!

It would only be appropriate to begin with a show that has made rebranding Easter (called "the Alzheimer’s ravaged mother-in-law of holidays") the focal point of its season. "Let’s face it, Easter sucks!" said the villain to the Pope in the premiere as he explained his idea to rebrand the holiday, "We’re gonna make Easter great again – for the first time!" During Holy Week, the show pitched "bringing sexy back to Easter."

Young Sheldon was on last year's list and earned a top spot once again for its second season in which they sexualized a teen girl's bapism, mocked Sheldon's mother for thinking her prayers protected them during a tornado, and reduced organized religion to "an extremely efficient form of crowd control."

Apropos of Easter, in this scene, Sheldon visited his Vietnamese friend's home where he encountered a crucifix and called it "gruesome religious iconography" that he "did not like."

Another repeat offender on the list, last season Preacher depicted God as a kinky man in a dog suit in the premiere. Then, to follow up, Tulip called God “an almighty dickwad” and vowed to find him again and “kick his dick ass” - complete with a visual of Tulip grabbing God by the throat and kicking him in the crotch.

Madam Secretary is always holier than thou, but chose this Lenten season to call out Christians about global warming. Madam Secretary's husband, Henry, gave a speech to an Evangelical group during which he referred to Genesis 2:15 and lectured, "It's hard to claim you love the Creator, if you're ignoring the profound harm being done to His masterpiece. The longer we neglect our duty to God, the farther we stray from His purpose, and the closer we are to succumbing to an existential threat to humanity: Climate change."

ABC's The Kids Are Alright: Catholicism Only Holds Up If You 'Don't Look Too Closely'

This is a new ABC comedy that takes place in the 1970s, featuring a large Irish-Catholic family. But apparently their faith isn't too deep. In an episode that aired earlier this Easter week, the mom said, "Our religion has a lot of beautiful, profound ideas that only work if you don't look at them too closely," while the dad concurred, "Yeah, church isn't set up for brainiacs wringing their hands, trying to pick things apart."

When atheist Jim Brockmire had to find God to work the AA steps for his sobriety, he went to church with a co-worker. Things went horribly wrong when he apparently brought up the Holocaust and called Jesus "The Mayor of Auschwitz" when the priest "brought up a benevolent God." Brockmire concluded God is "thin-skinned" and needs to "grow Himself a pair of balls." Another delight that aired during Holy Week.

In the season 2 premiere of this notoriously anti-Christian show, main character Bridgette wandered into an empty church ready to commit sacrilege. After screaming, "Abortion!" at the top of her lungs, she broke into the Holy Eucharist to drink the wine, drunkenly talked to the Virgin Mary Statue, then stole it from the church. In another episode she interrupted a prayer to assert God doesn't exist and then ended it with "awoman." Thank God this show has been canceled.

Netflix's dramedy about teen pageant girls in the Bible Belt seemed to glory in blasphemy. The girls competed in the Miss Magic Jesus Pageant to win the “Crown of Thorns” and opened the show with a horribly inappropriate ensemble song and dance routine. Among the lines sung, "Sweet, sweet Jesus inside me, I got You deep in my soul. Deep, deep, deep in my soul. Yeah! Oh, Spirit, please ride me. Please, please, please, please ride me." Because I guess it's supposed to be funny to totally pervert a relationship with Jesus.

Over the course of the season of this "work-place" comedy based in Heaven, God was portrayed to be "a petulant man-child," "incredibly needy," and "an idiot," so there was a lot of material to choose from. Ultimately, this clip of God pretending to know how to read when he really can't encompasses all of those elements.

This last one aired on Easter night 2018 so it was too late for last year's list, but it's so bad we had to include it this year. Stephen Colbert's animated series dunking on the Trump administration particularly likes to attack Vice President Mike Pence for being a devout Christian. This episode had Trump picked up on a hot mic calling Joseph a "putz" and saying if God had knocked up his wife he'd cut off His penis. Trump mocked Pence for thinking his great-grandfather hunted dinosaurs, then asked Melania, "How do grown adults still worship Jesus?"

Another terrible year for Christians on TV. Let's pray next year's list won't have to be so long.