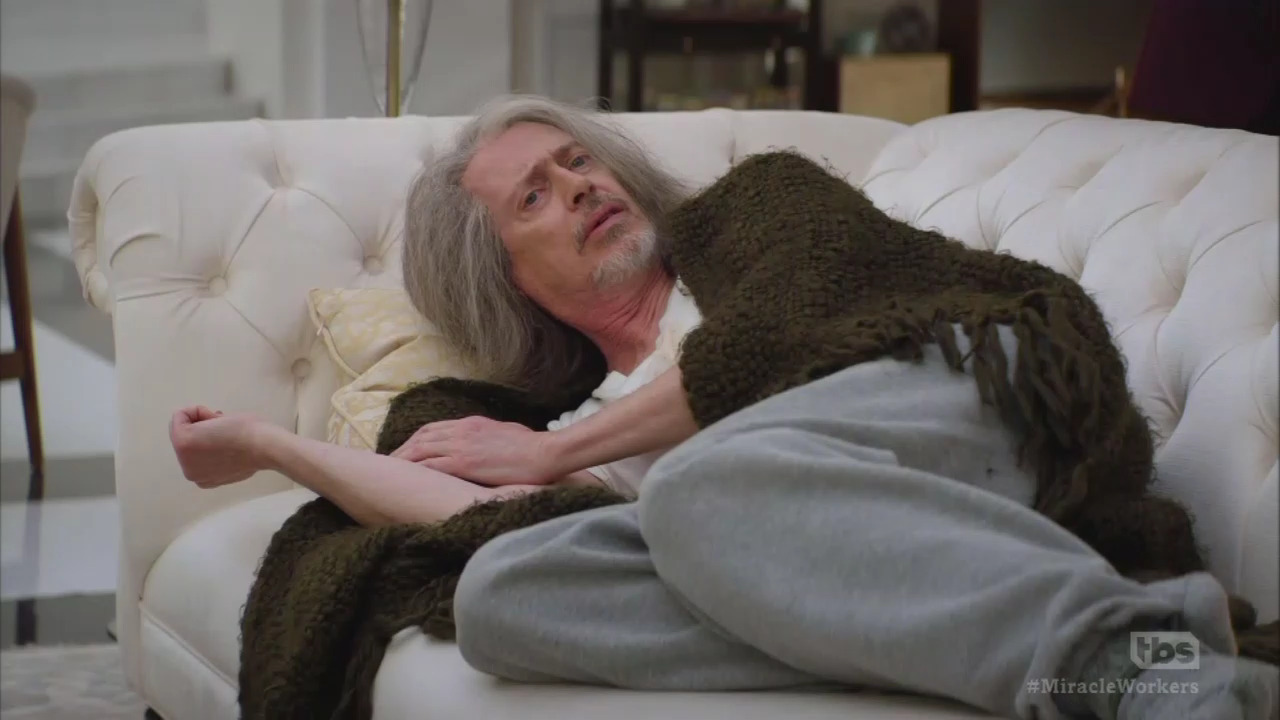 If the approximately 5,892,643 other attempts by Hollywood to mock and criticize God weren't enough, TBS’s new comedy Miracle Workers, which premiered on February 12, has just given us one more vehicle that does just that. Though there is no mention of Jesus yet, the Christian/Jewish God of The Bible is definitely the target, according to a Vanity Fair article titled, “How Miracle Workers Turns Heaven into a Corporate Hell.”

Based on the novel “What in God’s Name,” by Simon Rich, the show stars Harry Potter’s Daniel Radcliffe (who was already a huge fan of the book) as anxious, overworked angel Craig who is solely responsible for answering the world’s prayers in the corporate world of Heaven called Heaven, Inc.

Steve Buscemi (Boardwalk Empire) plays a lazy, cursing, insecure version of God who doesn’t seem to wield much knowledge or power. Or, as described in the Vanity Fair article, “…a jaded failure of a God who’s also more than a little dim-witted,” and “inspired by the Book of Genesis” because “he’s incredibly needy:"

One of his first [commands in Book of Genesis] is, ‘You can’t have any gods but me,’” [Rich] explained. “He’s this deeply insecure guy, and you work backward from that; this guy is desperate for people to sacrifice rams to him in a specific way. He wants Abraham to kill his son, or at least see if he’ll do it. He wants a bunch of dudes to cut off their penises and other people’s penises—or parts of their penises, anyway . . . Where does that come from? Typically, people who are that insecure have some kind of family situation which explains it, so it was really fun to kind of figure out what our God’s backstory might be to justify his behavior.

On Tuesday’s premier episode, “Two Weeks,” God is fed up with earth and all its problems, which, of course, according to the show, includes global warming:

Woman on TV: The largest ice sheet in the Northern Hemisphere is simply melting away.

Woman 2: A Florida man on bath salts has eaten a woman's face.

Man: And Buzz Dougan has shocked the world!

Rosie: You were going to reveal your plan to end all pain.

God: Oh. That was today? Uh, yeah, I've been working on that all quarter. You know, just crunching numbers and –

Assistant: Okay, you heard him! He's very busy. He doesn't have time for this. Come on! Chop-chop!

Buzz: People talk every day about how the world is screwed up, but...man, I say we're blessed. Great things happen every day. Great things! Whoo!

Newscaster: And that, of course, was Buzz Dougan's final interview before his horrific explosion at Daytona. He is dead.

Newscaster: Next up, the polar ice caps are melting at a historic rate. Scientists really cannot believe what is happening to our Mother Earth.

Even though liberal environmentalists warn us that we’re going to destroy the earth ourselves in real life, on Miracle Workers, it’s God who decides he’s going to blow the earth up in two weeks if he wins a bet with angel Eliza (Geraldine Viswanathan). Eliza is newly promoted to the Answered Prayers Department where she meets Craig who has been handling all incoming requests by himself in the small, dark room adjacent to an entrance filled with cobwebs and leaky pipes.

When Eliza tells Craig that the department seems “wildly understaffed,” Craig replies, “It was designed to accommodate a much smaller Earth population. No one ever imagined the planet was gonna get this crowded.” Mocking God? Check! Global warming? Check! Overpopulation? Check! And this is just the first episode!

Craig has only been answering small prayers, such as helping someone find their keys, because he’s too overwhelmed to answer the more important requests. (In one instance, he helps a man find a missing glove and the man ends up going on to become a serial killer that can’t be identified because he leaves no fingerprints behind.) Craig marks the more difficult prayers as “impossible” and sends them up to a beer-guzzling God who ignores them.

Eliza: So, which prayer do we answer first? Saving a life, curing a disease..?

Craig: You have arrived at a great moment. This one is set to be a nail-biter.

Eliza: Keys. Okay, yeah, guess we gotta get this little one out of the way. Let's zap her the keys.

Craig: Oh, no. We can't break the laws of physics. No zapping. No flying. Nothing they're gonna notice.

Eliza: So how do we answer prayers?

Eliza: I'm sorry. How much longer is this gonna --

Eliza: Okay, okay. So, now we move onto something bigger...?

Eliza: Ah! I found a good one… Okay, let's get started.

Eliza: WHA-- Whoa! You're just gonna let those wolves go to town on that guy?

Craig: I find it's best to stick with the small ones. But don't worry. "Impossibles" go all the way to the top. And so, if anyone can handle them, He can.

As 2 million more prayers pile in, Craig tells Eliza that he usually “tries to shoot for three, four a day. Although, now that I've got you, a teammate, there's no telling what we can do. I'm thinking five... six... Maybe as many as six!”

Eliza takes matters into her own hands when Craig steps out of the room and she attempts to answer the prayer request of a farmer who needs help in getting his crops to grow. Just when she thinks she’s succeeded by making it rain, alarms sound and the computer warns that a large typhoon has hit the area surrounding the farmer. A news reporter announces, “Wails of grief intermingle with the shrieking of the death winds as the typhoon rages on, taking the lives, and dignity, of thousands.”

When Eliza exclaims that there must be something they can do, Craig says meekly, “I mean, you can press f7.” “Does that stop typhoons?” she asks. “No, it turns off the sound,” Craig explains. So, even God’s angels are inept and uncaring in this dystopian mockery.

Eliza’s anxiety increases as another alarm warns, “Overflow,” and prayer requests begin flooding the room. Craig tells her not to beat herself up because it’s her first day and “we all make mistakes.” (Of course, that’s a quality limited to humans, not angels, but I’m sure the writers already know that.)

Eliza finally has enough and runs out of the room, telling Craig she’s going to “fix this.” Instead, she only makes matters worse after she urges God to fix the typhoon and other problems on the earth.

God: Oh, Lazy Susan. If only everything worked as good as you.

Sanjay: I'm sorry, sir. I told her you were busy.

Eliza: Okay, there is a crazy typhoon happening, and it's killing lots of people. Can you help?

God: I don't want to sound cynical, but what's the point?

Eliza: Uh, the point is, you're God. You made Earth, okay? It is yours. And right now, it is in big, big trouble. It is a mess! People are dying! And you -- you are the only one that can fix it. Please, you have got to do something.

God: You know what? You're right.

Craig: Is that God?

God: Can they hear me?

In the end, though, Eliza is able to stall the destruction of the earth for at least two weeks when she bets God that she can answer an impossible prayer. If she fails, God blows up the earth and, He adds, "You have to eat a worm. Alive. The whole thing. The head and the butt. In front of everyone. And you have to act like you like it. You have to go, 'MMM. Oh-ho! MMM. Yum. I like worms.'"

Eliza ends up choosing a “love prayer” even though Craig warns her that they “never work.” God asks Eliza if she’s sure this is the prayer she wants to choose. “I don’t want you crying when everybody starts calling you ‘Worm Breath,’ he warns her. After she confirms her prayer choice, God laughs and tells her she chose the hardest prayer in the box.

And thus, we have the premise for the rest of the series. God vs. potential ‘Worm Breath’ angel who wants to save the world from Him. Lovely.

So far, there’s been no mention of Jesus, so we have yet to see if the show will mock Him as well as we near the start of the Lenten season. But, according to the Vanity Fair article, His family will play a role in the show. “In this series, God does, indeed, have a tough family situation—largely thanks to his over-achieving siblings,” the article states.