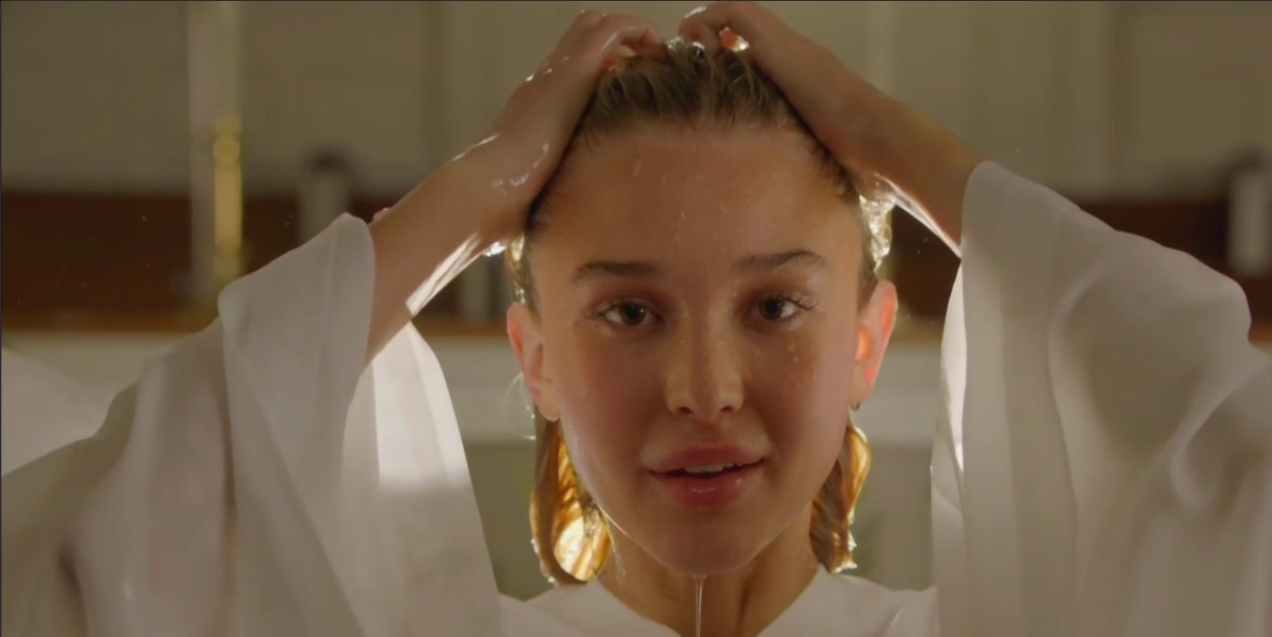 CBS’s Young Sheldon is no stranger to mocking religion. That the January 3 episode, “A Race of Superhumans and a Letter to Alf” went after Christians was nothing new. What was, however, was that the mockery came not from Sheldon (Iain Armitage), but from his dimwitted older brother, Georgie Cooper (Montana Jordan), for his own personal sexual gain.

The October 25 episode “Seven Deadly Sins and a Small Carl Sagan” featured Georgie courting fellow student Veronica (Isabel May). He nearly hooked up with her, but a visit to the “heck house” which his mother, Mary, worked on, led Veronica to become a Christian instead.

In addition to becoming a Christian, Veronica has changed her hairstyle and clothing style, but Georgie is still interested in her. He tells Veronica that God says they should hang out more, though he admits, “I couldn’t understand all of it, ‘cause it was in an ancient language,” and attends his mother’s Bible study which Veronica is part of. He also starts showering and brushing his teeth more.

Georgie even attends church with his mother and Veronica, which features an eyebrow-raising reminder from the pastor. While Veronica prays for her sister, who is in jail and addicted to drugs, and for herself to live a life free from sexual impurities, Georgie has a rather casual conversation with Jesus, which involves promises to attend church and even spread the faith, if he is granted sexual favors with Veronica:

Pastor Jeff: And now, why don't we take a moment to pray, uh, keeping in mind that our prayers should not be for our own benefit, but for our family, friends, fellow Texans, Americans of all races and religions and the world. Well, most of the world. Y'all know what countries to pick.

Mary: Lord, please look after my family. Give them everything they need to be happy and healthy. And this lovely young girl with me tonight, help her stay on the path of righteousness.

Veronica: God, please look after my sister. You can find her at the women's correctional facility in Lubbock. Help her seek salvation in you instead of cocaine, marijuana and bass players.

Georgie: Jesus, I'm sure, even from Heaven, you can see how hot the girl sitting next to me is. And I know I'm not supposed to pray for myself, but here's the deal: If you can get her to fall in love with me, and you know, make some bad decisions, I swear I'll come to church every Sunday.

Mary: And thank you for bringing Georgie tonight, even though you and I both know why he came. Speaking of which, whatever he's praying for right now, ignore it.

Veronica: And please protect me from impure thoughts, and teach me to respect the sanctity of my body.

Georgie: Now if for instance she and I were to go skinny dipping and one thing were to lead to another under the moonlit sky, get this: Not only do I become a devout Christian, I will also bug everybody I meet to do the same. And you know I can be real annoying when I set my mind to it.

Georgie: I'm gonna take your silence as a yes. Amen.

It’s one thing for television to portray a teenage boy as wanting to be romantic with a teenage girl. Georgie actually evokes God with it, though, along with promises to attend church and spread the faith, acknowledging that he is asking God to make Veronica “make some bad decisions.”

Further, the things which Mary and Veronica especially pray for are legitimate matters. Faith can save people, as it saved Veronica, but it has also saved real people who have served time in prison and had to endure other hardships in life because of addiction. When Georgie’s prayer requests are so outlandish, however, these fall to the wayside.

Upon asking Veronica to hang out with him, Georgie finds out she’s getting baptized. Since he’s “been meaning to do that,” Veronica invites Georgie along, which he refers to as “getting double dunked,” throwing in a suggestive tone along the way as he mentions “we can start cranking out fresh [sins]” afterwards.

During the actual baptism, when Veronica is dunked in the water and comes back up, she is portrayed through the eyes of Georgie, who clearly sees her as a sexy young woman, flipping her hair around with a seductive expression. After he himself is baptized, he is so elated he kisses a shocked Veronica, which promptly gets him punched and earns him a black eye. (Meanwhile Sheldon is trying to get Missy to learn Calculus by threatening her Cabbage Patch doll.)

Pastor Jeff: Veronica, do you trust in Jesus as your personal Lord and savior?

Pastor Jeff: It's upon your profession of faith that I baptize you, my sister, in the name of the Father, the Son and the Holy Spirit. Amen.

Pastor Jeff: In the name of the Father, Son and the Holy Spirit. Amen.

Georgie: I love you.

Mary: Care to explain yourself?

Sheldon: I was trying to motivate Missy to expand her intellectual horizons.

Sheldon: Well, it's not like I shocked her with electrodes, which was an option.

Sheldon: To be clear, I meant to shock Missy, not the doll. That would be ineffective.

Mary: Enough! And you. Getting baptized just to kiss a girl? What were you thinking?

Georgie: Sounds like you know what I was thinking.

Mary: Well, you are both grounded.

Mary, who is herself portrayed in the show as a devout Christian, acknowledges throughout the episode that she knows what Georgie is up to. But it’s not until he kisses Veronica following their baptisms, that she bothers to reprimand or ground him for it.

For a show to portray its dimwitted and pubescent teenage boy character as trying to impress girls and think about kissing them is hardly surprising, especially by today’s standards. But surely, that can be done without taking aim at religion and sexualizing a wet teenage girl dressed in white. After January 3’s episode of Young Sheldon, even fewer of the Christian sacraments remain sacred however, as the baptism pool is used as a venue for kissing.