New Anti-Religious Comedy ‘Miracle Workers' Puts Spotlight on Bill Maher: ‘God Is as Fake as My D*ck Is Huge!' 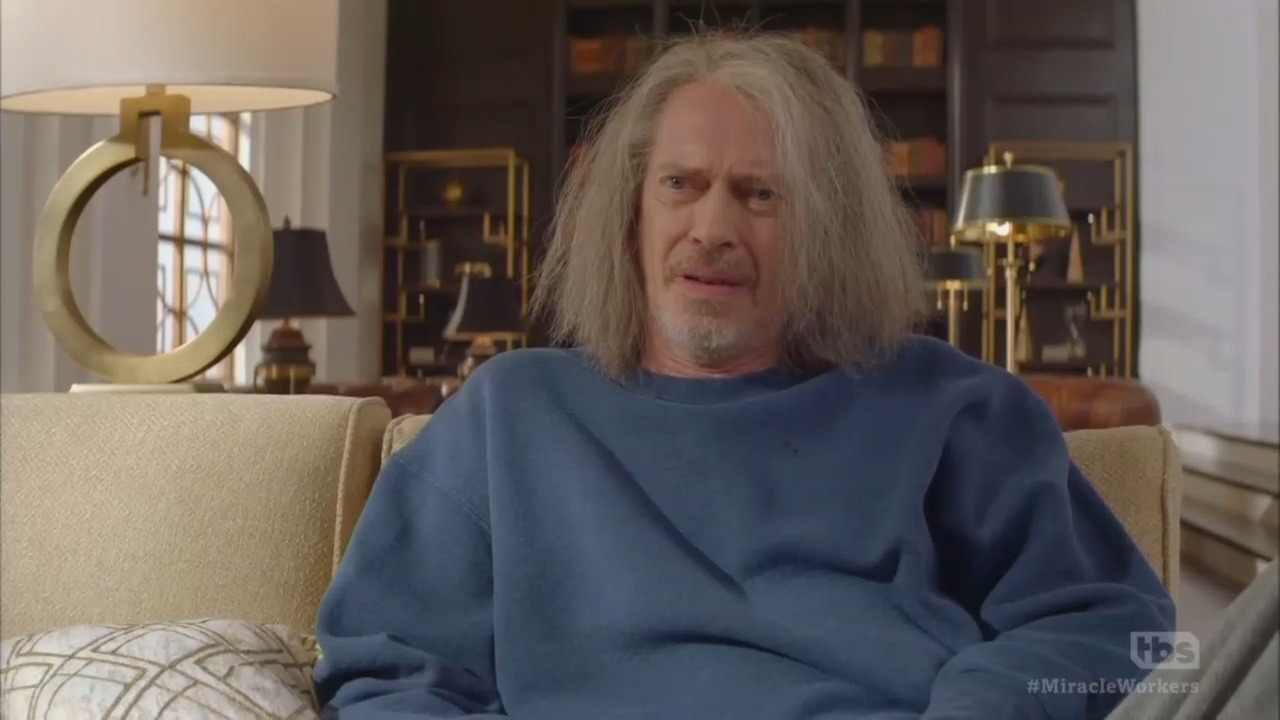 TBS’s new comedy Miracle Workers sank even lower in its anti-religious bigotry in just its second episode Tuesday night, “13 Days.” The episode features clips of comedian Bill Maher mocking religion and God, as he so often does, which leads God (Steve Buscemi) to pretend it doesn’t hurt His feelings. But He still wants Maher killed. More specifically, He wants to “explode his penis.” You can’t tell at all that this was written by the typically immature, sex-obsessed, faith-bashing leftist Hollywood, can you? /sarcasm. But don't worry, the creator insists the episode carries "more meaning" than just "one big, elaborate dick joke."

The episode begins as God is on the couch watching television, as usual, when he comes across Bill Maher’s show:

Sanjay: Rosie, if anyone comes looking for me, tell them I'm in a meeting. With God!

Sanjay: Hey, I got all your missed calls. What's the emergency?

God: Have you heard of this guy Bill Maher?

God: Yeah. Do you think he's funny? 'Cause I've been watching his stuff, and I don't know about these jokes.

Sanjay: You mean the jokes about you?

Sanjay: So, what do you want to do?

God: Whoa! Sanj! Did you just drop the "K" bomb? Wow! Wouldn't want to get on your bad side, Ice Man. Whoo! Freezer burn. But, yeah, kill him.

Sanjay: Okay. Well, the good news is, Bill Maher's already scheduled to die along with everyone else, when the Earth explodes in 13 days.

God: You know what's funny, is that, you know how sometimes, like, a day can feel so long?

Sanjay: Okay, I'll go find a way to kill him.

Sanjay comes up with a plan to kill Maher via heart attack after finding build-up in his left ventricle. But that’s not good enough for God. He wants something more dastardly. Something that maybe a juvenile Hollywood comedic writer might think of. God says, "So, we could explode his heart... or his lungs...or his penis."

Now Sanjay's mission becomes to kill Bill Maher by exploding his penis, which he promptly passes off to the Department of Genitals.

Apparently, the power of being the one responsible for making sure Bill Maher’s penis gets blown off has gone to Sanjay’s head, as he brags about knowing when to delegate while he relaxes during a shoe shining service. But he quickly learns something has gone awry in his plan:

Sanjay: Oh, Jean Claude, what would I do without you? Don't neglect the heel cap. You know what they say. It's not the clothes that make the man. It's the man who makes the –

Rosie: Aren't you meant to be off dealing with that penis?

Sanjay: Oh, yeah. I put someone on that. Part of being an executive is knowing when to delegate.

God: Sanjay! Get in here! Look at this!

Reporter: Bill Maher, or should we say, "Bill More," was feeling cocky as he dragged more than one hot dog down the street. His dick grew! We asked the anti-religious provocateur how he felt about his blessing, and the funnyman quipped, "God is as fake as my dick is huge." Happy birthday to Bill Maher!

Sanjay: I don't know what happened!

God: I'll tell you what happened. You messed up, man! I thought you could handle this. You're supposed to be an executive.

Sanjay then storms into the Department of Genitals to find out what went wrong:

Sanjay: What the shit?!

Angel: Oh, I-I-I can explain. We pumped Bill Maher's glands full of hormones in hopes that his penis would expand and then pop like a balloon, and everything was going smoothly, but then -- As Bill's penis became larger, it grew more -- more beautiful. At a certain point, we realized it would be immoral for us to destroy something so perfect.

Sanjay: I don't care. This is coming from the top! Just blow it up!

Angel: With respect, we refuse. This isn't the Department of Anuses. We have integrity.

Sanjay: Okay, fine! I'll do it myself!

Sanjay: Why isn't this working?

Angel: You have to put your eyes up to the eye hole, and, uh, stare at the penis when you pump.

Sanjay: How many pumps is this gonna take?

We then find Sanjay looking exhausted sitting in one of God’s chairs with both arms in a sling and a bruise around his eyes from staring into the eye hole of the Pump-O-Tron while pumping it 50,000 times. But his mission was finally accomplished.

“All right, Sanjay! I hope you're proud,” God tells his assistant. “You look proud. Tell you what, I'm proud of you. Wow. I mean, I know how much you hated Bill Maher. How much he hurt you. And it would've been so easy for you to just keep taking the hits, night after night, special after special. But you stuck to your guns, and that's why you are one heck of an executive.”

God then tells Sanjay he must taste-test dozens of gumbo dishes, which “range from thick to almost solid,” for God’s Lazy Susan restaurant plans. He’s completely oblivious, as usual, to the fact that Sanjay is full, exhausted and can’t even feed himself because his arms are in the slings, and He offers His usually cheery, “Ah, I love you, buddy. I love you,” an obvious sacrilegious play on one of the most important characteristics of God - His steadfast love for us.

While some viewers may say God has a sense of humor and would laugh at this show, there’s quite a difference between having a sense of humor and tolerating blatant disrespect and an agenda to belittle God and Judeo-Christian faith. Others may remark that it’s “just a comedy,” but most of us know that leftist Hollywood often hides its most offensive agendas in the form of seemingly innocent “comedy” and even cartoons.

It’s very much like the concept of, “Pay no attention to the man behind the curtain,” in The Wizard of Oz. If the godless writers and producers can mask their agenda behind comedy, it not only helps to hide their true intentions, but they also can claim that any critics simply lack a sense of humor and/or are overreacting.

Unfortunately for them, Simon Rich, the author of the book “What in God’s Name” that the show is based on, keeps offering very telling quotes to the media that peel back that curtain, revealing the man behind it and his true agenda.

Rich spoke of this episode in particular in an interview with The Daily Beast:

"It might seem like one big, elaborate dick joke on face value, but the Maher gag carries more meaning than that. When we chatted with series creator Simon Rich about it, he explained how it was necessary to both give viewers a sense of the juvenile pettiness of God in the series, who is fashioned in the vein of the terrible boss we’ve all had the displeasure of working for, as well as setting up the stakes on which the show’s entire premise is built.

Remember that Rich is not just speaking of the character he developed. He is speaking of the actual God of the Bible, as proven in his interview with Vanity Fair, where he says his God character is, “inspired by the Book of Genesis” because God is "incredibly needy.” And he added to that in his interview with The Daily Beast, saying, “This is a God like the Old Testament God, who is capable of wiping people out on purpose.”

Fortunately for Rich, God is nothing like the “petulant man-child” (The Daily Beast) he has created, but is instead patient, forgiving, kind and loving, offering His only Son to take on sin for us so that we wouldn’t have to pay the price ourselves.

Not surprisingly, the show already has at least one petition against it, created by Catholic group, The American Society for the Defense of Tradition, Family and Property (TFP), which called the show “a disgusting blasphemy.” The petition states in part:

This is just so offensive and messed up. The show is filled with other horribly false portrayals of that which any God-fearing Christian would find sickening. How dare TBS mock God Who is all-knowing, all-loving and Is Goodness itself! Please show your outrage at this blatant attack on God. We must defend His Honor!