From Teen Abortions to Feeling ‘Very F**king Powerful’: How TV Normalized Abortion in 2019 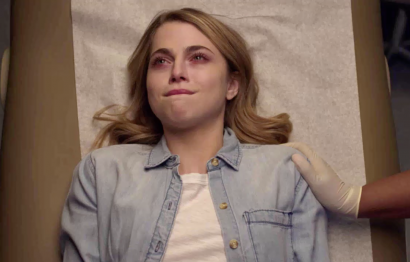 While television networks largely celebrate abortion, it’s worth noting that a celebration of life is taking place, with the annual March for Life on January 24. Whether networks will finally give these peaceful pro-lifers their due in media coverage, after for years neglecting them, remains to be seen. Meanwhile, liberal television networks, from news shows, to actress spokespersons, to television dramas, continue to promote abortion to the public.

Here’s a look at some of the most memorable abortion moments on television from the past year. (See the previous year here.)

There’s plenty to say about HBO’s Euphoria, which has been the subject of several articles highlighting sexed up teens. An abortion episode seemed almost natural, then.

In the August 4 season finale, “And Salt the Earth Behind You,” we actually see high school student Cassie have an abortion. When her mother asks how she’s feeling afterwards, she can only answer “better.” She happily attends her winter formal. While the show does accurately portray how abortions are often coerced, as Cassie is by her older college boyfriend, this sad fact is glossed over.

In Apple TV+’s The Morning Show, Reese Witherspoon’s Bradley Jackson admits in the fourth episode, “That Woman,” that “heck, I had an abortion when I was 15 years old.” That’s not the only way in which teen abortions are pushed, however. Bradley’s character is actually seen as some kind of a role model, with a news anchor excitedly reporting on “footage [that] is remarkable” of a high school walkout in Mississippi in support of her abortion:

In the second episode of the third season of Netflix’s 13 Reasons Why, “If You’re Breathing, You’re a Liar,” Chloe (pictured above) decides to abort her baby. Not only is the abortion shown, but pro-lifers are made a mockery of, as are crisis pregnancy centers. A nurse then calmly describes the abortion procedure. “The doctor will come in and insert a very small tube into your uterus. It is connected to a suction device. That suction device will dislodge and remove the uterine content,” explains a nurse. That “uterine content?” Chloe’s baby. The abortion procedure the nurse is describing involves a suction device that has 10 to 20 times the force of a household vacuum cleaner. Remains of the unborn child are then scraped out with a sharp metal device.

The show almost delves into regret shown by young women who have abortions, but squashes that truth like a bug. Whenever Chloe starts to feel ashamed, her friend Zach tells her to “not feel that,” saying that “shame” is only “what other people put on you.”

Crisis Pregnancy Centers are a valuable resource enabling women facing unplanned pregnancies to choose life for their children. Sometimes this means choosing adoption, sometimes parenting. They’re not meant to judge, but to help women. You’d never know that from how the liberal networks address CPCs, mostly as “fake clinics.”

When 13 Reasons Why's Chloe goes to the CPC “Resources for Choice,” it is treated as a horrible, deceitful experience since, rather than providing help in getting an abortion, the center offers counseling and resources. It’s something Zach apologizes for, something he “can’t even imagine.”

Freeform’s The Bold Type uses May 30’s episode “The Deep End” to gin up a crusade against pregnancy centers. Kat is deciding whether to run for city council, a move she’s unsure about in part because she had an abortion while in college. Campaign manager Tia also had an abortion, revealing she went to what she calls “a fake clinic. You know, a crisis pregnancy center where they give you an ultrasound then flood your brain with anti-abortion propaganda and false medical statistics.” Even worse is how “there are actually a few in [Kat’s] district.” Because how dare places exist which offer women options besides having an abortion.

As you might have guessed, Kat decides to run for city council. “I wanna shut down those fake clinics,” she says. She even uses the abortion to earn votes. “Just so you know, I smoke weed sometimes. I support immigrants’ rights. And I had an abortion,” she tells a woman. The woman responds, “Well, you’re my kinda candidate.”

Syfy’s Happy, complete with some strong language of a literal “fuck you” in May 1’s “Pervapalooza” features a crisis pregnancy center worker talking to Amanda, terrified at the prospect of being pregnant. While many pregnancy centers are religiously affiliated, they don’t go around claiming they can “save your soul” and guilting patients by asking how an 11-year-old “would...feel about you killing her little brother or sister.”

In Veep’s April 14 episode, “The Pledge,” campaign staffer Amy Brookheimer gets into it with some pro-life protesters before having her abortion. “ Oh! You want me to think about the children, you hog-fingering fucks,” she tells the protesters. “Well, I did think about this. I considered it, and I cried, and yeah, suck my cock, I even prayed a little, and here I am. So you can back the fuck off, you hypocritical cunts, before I show up to the piss puddle that is your house and protest your husband whacking it to your daughter's seventh grade yearbook.” The crude outburst was sadly but predictably lauded by many in the pro-abortion media.

Following this scene, Amy is shown having her abortion, during which she turns down the chance to view the ultrasound and proclaims, “Less talk, more abortion.”

After the abortion, Annie and Fran celebrate over outfits as Annie shares she feels “better” and “like… really, really good.” Annie tells Fran, “I got myself into this huge fucking mess… but, I made a decision, only for me, for myself, and I got myself out of it.” She even feels “very fucking powerful right now.”

As several states considered and passed heartbeat bills banning abortions once a fetal heartbeat is detected, outrage from the left was palpable. CNN was particularly fired up in their coverage. Networks, companies and individuals threatened to boycott the state of Georgia. Television dramas also capitalized on protesting heartbeat bills, and in some bizarre ways.

Law & Order: SVU turned to tiredly overdone tropes, including in the October 17 episode of “The Burden of Our Choices" that involves Evangeline, a 13-year-old runaway who comes from a fundamental Christian family and is raped by her stepfather. The episode apparently takes place in a universe which ignores how Ohio’s heartbeat law was blocked in court.

Katriona Tamin is there to complain about pro-life laws, wondering “what century is this” with “all these old white men trying to control women’s bodies.” She even wonders “how far off are we from The Handmaid’s Tale?”

Lieutenant Olivia Benson makes the point about “back-alley” abortions, whose figures have been largerly exaggerated by the pro-abortion movement, noting how abortion laws affect “poor women” and that “in some states, they’re gonna see deaths.”

In NBC’s The Blacklist, the November 15 episode of “Hannah Hayes” featured a doctor who would implant uteruses into conservative pro-life men she kidnapped and then surgically impregnate them. Hannah then kept the men hostage until they could no longer abort due to heartbeat laws in their states.

As mentioned, there were quite a few pro-abortion moments on television this past year. Some shows were even repeat offenders.

In New Amsterdam, pro-lifers are expected to keep their opinions to themselves. You’ll likely recall Scandal setting its abortion scene to “Silent Night.” It seems New Amsterdam may have been seeking to one-up such a grotesque storyline with a young woman with Down syndrome having an abortion during the October 29 episode, “Righteous Right Hand.” Dr. Fromme even calls the unborn child, who is ultimately aborted while a gospel hymn plays, “a burden.”

Empire’s last season featured what might at first glance seem like a pro-life message, only for the character, Tiana, sharing her story about choosling life to be shamed for her views in October 8’s episode, “You Broke Love.” “What about the 13-year-old little girl who's raped by her uncle?” Treasure asks, before pointing out that “anti-choice people don't think about that little girl. At all. They're not pro-life. They're more like pro-birth.”

The sentiment against pro-lifers continues in November 12’s episode “Heart of Stone,” where manager Becky calls Tiana “anti-choice” and compares it to R. Kelly’s rape allegations, pointing out that “I'm sure R. Kelly didn't find anything wrong with his love of little girls either.” Yikes.