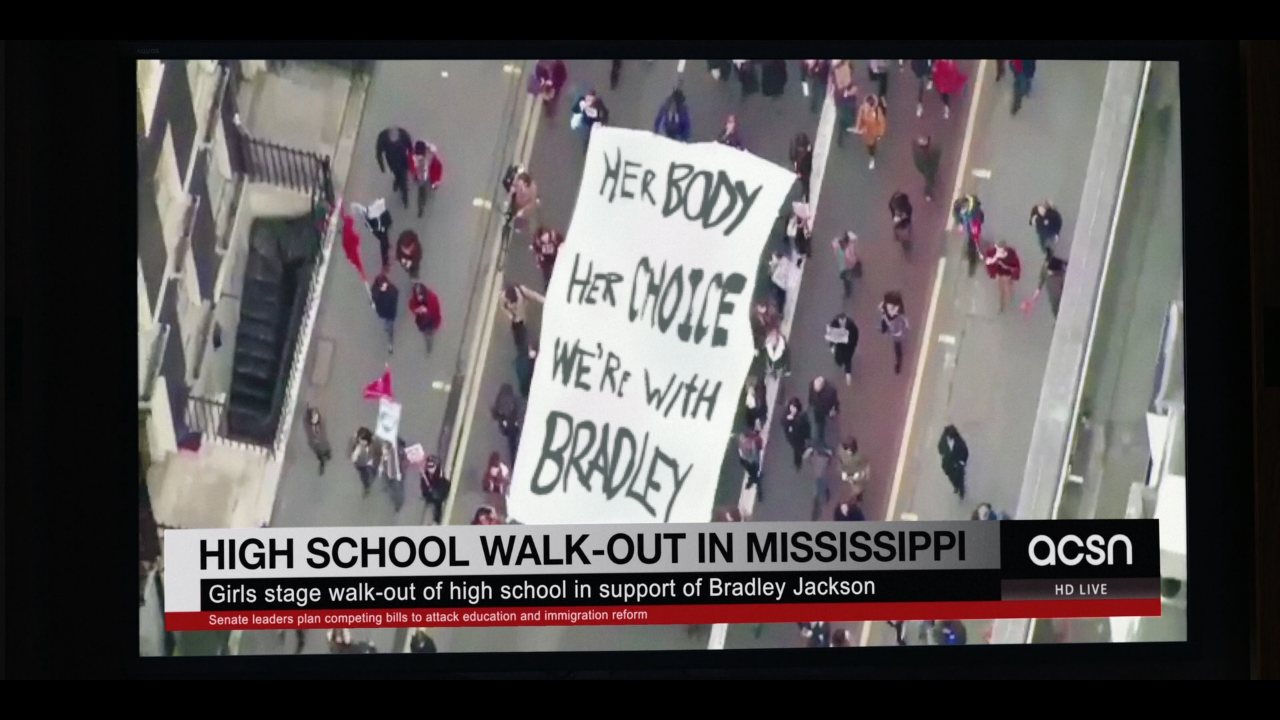 Last week it was an anti-coal rant, this week on Apple TV+’s The Morning Show, Reese Witherspoon’s character admitted to a teenage abortion that inspired a viral moment that rallied the country behind her.

In the series’ fourth episode, titled “That Woman” and released Friday, Bradley Jackson (Witherspoon) makes her co-anchor debut on The Morning Show with Alex Levy (Jennifer Aniston). Infamous for going off-script, Bradley becomes uncomfortable with an interview with her mother that glosses over her childhood. In a moment of candor, Bradley starts listing all the bad things she did as a teenager, ending with, “Heck, I had an abortion when I was 15 years old,” which shocks everyone.

The moment goes viral, with the Pro-Life Action League condemning the station and show while Planned Parenthood tweets their support, of course. It also motivates high school girls in Mississippi to stage a walk out in support of Bradley and abortion. Reporters rave about the “inspiring story” calling it “remarkable.” Note how what is no doubt a heartbeat bill (banning abortion after the baby’s heartbeat can be detected) is described as simply “legislation that would ban abortions after six weeks.”

Reporter: Next, we have an inspiring story coming out of Mississippi, where high school girls are walking out of class today to show their support for Bradley Jackson, the new co-anchor of The Morning Show, after the governor tried to reintroduce legislation that would ban abortions after six weeks. This action comes after a controversial comment he made earlier this week calling The Morning Show's Bradley Jackson "a dangerous threat to America." Mississippi already has some of the nation's strictest abortion laws. In southern parts of the state, walkouts have lasted nearly six hours, which represents how long it would take a student to drive to the state's only remaining abortion clinic.

Female Reporter: This footage is remarkable.

Male Reporter: The power of social media on display.

Female Reporter: Not to mention Bradley Jackson. Her comment has lit a fire under the abortion debate nationwide.

Male Reporter: And the governor's attempt to use Jackson as a lightning rod to push his agenda appears to have backfired.

Female Reporter: I agree. I'd also argue that these walkouts go beyond just the abortion bill. They're happening because people heard Bradley's story and thought, "That could be me. And I want to make my own choice about my future like she did."

In a slight nod to reality, Bradley’s abortion declaration isn’t championed by everyone. Pro-life and pro-abortion protesters gather outside the studio and it is said, “Half the country hates her, but half the country loves her.” Bradley makes an on-air apology, saying, “While I am not sorry for the life choices I've made, I'm very sorry for so casually discussing an issue that is so personal to many Americans.”

The network tries to navigate between the two sides, but somehow the pro-abortion, Bradley side is always the one that’s backed. The producers discuss cutting Bradley’s abortion admission from the West Coast feed, but it’s decided, “We can’t, the women’s groups are going to skewer us if we cut it.” They also talk about taking Bradley off a big interview later in the week, but that is rejected because it will be seen as “the powerful patriarchy silencing a woman for talking about her uterus,” and “Woke Twitter will never forgive us.”

Meanwhile, advertisers start dropping out. “She barely made it 10 minutes without announcing her teenage f*cking abortion to Middle America!” Fred, the head of the network, rants. He tries to defend what little honor the network has left, “What Bradley did yesterday was core shaking. It undercuts our integrity in an entirely different way than Mitch [who was #MeToo’ed] did. UBA has a reputation as a fair and impartial actor in the news business, and in one f*cking sentence she politicized us.”

But Fred’s complaints are dismissed because ratings are up and advertisers “will come back, they always do.” The head of the news division tells Frank, “In one day, Bradley Jackson re-branded morning news as personal, unexpected, exciting. You should be thanking her.”

It's no longer enough to "shout your abortion," now we have to thank women for shouting their abortion, too.