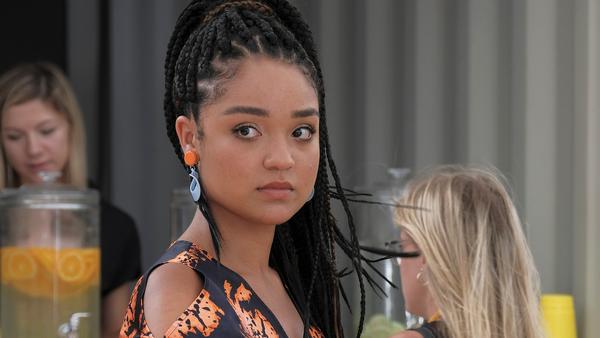 Freeform’s liberal teen dramedy The Bold Type once again promoted a pro-abortion storyline, but this time they also went hard after pro-life crisis pregnancy centers, claiming they “flood your brain with anti-abortion propaganda and false medical statistics,” and that they’re “run by anti-choice groups...designed to scare women away from getting medical help.”

On Tuesday’s episode, “The Deep End,” main character Kat (Aisha Dee) is considering a run for a City Council position in New York City. But when her political advisor does opposition research on her, he finds that she had an abortion in college in 2013, among other things.

Kat sits down to talk with her coworkers and best friends at Scarlet magazine, Jane (Katie Stevens) and Sutton (Meghann Fahy), about her abortion and whether or not she should run.

Kat: We were celebrating at the studio, it wasn't like a planned thing and I thought he pulled out in time but he didn’t. I know we should’ve used a condom but... I mean, there was never any question. I had to get an abortion. But he was great. He split the cost with me, he came with me to the clinic.

Jane: So, Toby thinks they would use this against you? I mean it’s your body. It’s your choice.

Kat: Exactly. Things are weird right now. And when it comes to abortion, it just -- it feels like it’s 1973 except we have bots and trolls and doxxing.

Sutton: There’s always going to be people with really loud opinions, but we’ll help you tune them out.

Kat: I should talk to Tia.

Kat then meets with campaign manager Tia (Alexis Floyd) to talk about her decision on running and tells her that she’s “not ready to be the face of abortion.” Tia reveals that she too had a secret abortion and she wouldn’t want hers to come out, either. Tia then goes on a diatribe against crisis pregnancy centers that help women choose life.

Tia: ... I went to the first place I could find which turned out to be a fake clinic. You know, a crisis pregnancy center where they give you an ultrasound then flood your brain with anti-abortion propaganda and false medical statistics.

Tia: Oh, it is very much a thing. There are actually a few in your district. And they’re run by anti-choice groups. And they’re designed to scare women away from getting medical help.

Tia: It is crazy. Anyway, I finally found a real place but by then, of course, I was terrified and guilt-ridden and...

Crisis pregnancy centers are actually designed to help women choose life, which is a threat to abortion clinics and their profits. Is Planned Parenthood a fake clinic because they don’t really help women choose life and only provide abortions and not prenatal care? Is that not deceptive? It was to me when I was 16 and facing a crisis pregnancy of my own. I called my local Planned Parenthood and asked for help with prenatal care. The clinic worker told me, “We don’t do that sort of thing here,” and hung up on me. It was the crisis pregnancy center Birthright that ended up helping me, which I found listed clearly under “Abortion Alternatives” in the phone book.

A couple of years later, I saw the Planned Parenthood that had turned me away on the news picketing outside of the Birthright that had come to my rescue, chanting, “2, 4, 6, 8, this clinic is a fake!” I was shocked because I was never misled by Birthright. How perfect for PP if they could shut down Birthright and leave women with no help or support for choosing life.

I have also volunteered at Birthright and I was never trained to be duplicitous. In fact, when women called to ask if we did abortions, I always answered truthfully: that we did not and that we were there to help her if she should want to choose life. You’d be surprised how many women weren’t too sure about their decision to abort and wanted more information on their alternatives, which they have every right to and wouldn’t have access to if it weren’t for the caring volunteers at these CPCs. Should we really trust an abortion business that profits from abortion to offer unbiased “counseling” to such women?

In the end, Kat decides to run for the City Council seat after stopping by a CPC and seeing a woman who is visibly upset walk out of the building. She immediately goes to campaign headquarters to tell Tia she’s running, and that she wants the “oppo research” report to be her platform. She says she's a bold, forward-thinking woman but couldn’t talk about her abortion until now. And if her running helps one woman be able to feel less ashamed and less guilty about their abortion “then it’s worth it...and I wanna shut down those fake clinics.” She tells a woman who stopped by the campaign headquarters: “Just so you know, I smoke weed sometimes. I support immigrants’ rights. And I had an abortion.” The woman responds, “Well, you’re my kinda candidate.”

Kat is even being compared to Rep. Alexandria Ocasio-Cortez, who Dee channeled for this storyline. “She’s such a cool example for young women and anyone who wants to get into politics,” Dee said to TodayTells.com. “She’s the real-life, much cooler version of Kat.”