April has come and gone with no shortage of absolute hatred and contempt from media progressives. Entertainment programming from major networks, cable TV and popular streaming services have delivered another 40 deranged anti-Trump/conservative scenes for impressionable viewers, providing God-fearing viewers another valid reason to grab those torches and pitchforks. Much of this month’s material is simply monstrous.

From liberal mouthpieces like Joy Behar and Jimmy Kimmel to #resistance level shows like HBO’s Veep and an anti-Trump TBS special, Hollywood’s fetid cretins slandered Trump and his supporters, calling the president the “culprit” behind the recent Poway, CA shooting, and comparing his administration's border policies to Michael Jackson’s alleged serial molestation.

Pro-life women were slandered as “hypocritical cunts” whose husbands abused themselves to images of their middle school daughters, Mike Pence was accused of enjoying throwing “disabled kids out of windows,” and White House Communications Director Sarah Sanders was described as “hideous as a pinworm in an anus.” Quite lovely, aint it?

Here are the worst TV moments from April:

It’s an ambitious claim, but the number one worst scene from April may already be top contender for worst scene of the year. The honor belongs to HBO’s Veep, which employed a stunningly vile epithet for pro-lifers. The scene revolves around the usually unhinged campaign staffer Amy Brookheimer (Anna Chlumsky) as she ventures into an abortion mill for her own procedure.

Not only does the scene portray local pro-life protesters outside the building as a loud, pharisaical throng, but uses the already agitated Brookheimer to launch an unholy tirade against them. As one protester demands Brookheimer to “think of the children!,” she pounces, conveying a level of hate rarely seen on TV. “Oh! You want me to think about the children, you hog-fingering fucks?” Then she goes completely nuclear with it.

“Well, I did think about this. I considered it, and I cried, and yeah, suck my cock, I even prayed a little, and here I am. So you can back the fuck off, you hypocritical cunts, before I show up to the piss puddle that is your house and protest your husband whacking it to your daughter's seventh grade yearbook.”

The next scene showcases entertainment media’s loving affection for Vice President Mike Pence. In the Amazon Prime series Catastrophe, one of the main characters named Rob gives a eulogy during his mother’s funeral and reads a letter containing her last words. Apparently Rob’s mother Mia (who was played by the late Carrie Fisher) was no fan of the Trump administration and certainly no fan of the vice president in particular. Her anecdote torches Pence on his looks and his “hatred” of disabled kids.

Rob reads, “I wouldn’t have to do it at all if this government gave a rat’s ass about disabled kids. They’d be happy just to throw them out the window. I bet Mike Pence spends his Sundays throwing disabled kids out of windows. Looks like he would, that fucking microwaved apple looking ass motherfucker.”

Joy Behar is often a fixture on this list as her hatred for President Trump knows no bounds. In April, Behar outdid herself in blaming Trump for the world’s problems by claiming that the president is the “culprit” behind the Poway, California Synagogue shooting.

Behar mentioned the most recent shooting, and cited several other acts of “white supremacist terrorism” to justify her claim that “we’re losing the soul of America.” She pointed to Trump’s rhetoric as a root cause, stating, “He’s provocative. He gives dog whistles constantly to these people.” Behar then addressed him directly, demanding, “Take responsibility for your actions, Mr. President. You are the culprit.”

Of course, the always sensitive Jimmy Kimmel earns a top spot for equating President Donald’s strict border policies to the actions of alleged serial pedophiles. Attempting to advocate for the moral high ground by hammering against the “child separation” strawman, Kimmel lost his cool and compared Trump to pop-star and alleged child predator Michael Jackson.

Kimmel quipped, “At this point Donald Trump has taken more kids away from their parents than Michael Jackson,” prompting the clapping seals in the audience to hoot and holler as if it was the most off limits and sensational line they’d heard in awhile. But as is usual for Kimmel, it just came off as cheap and classless. He also lumped Trump’s sons into the mix, adding, “If Trump really wants to put kids in cages, he should start with Eric and Donald Jr.” Wow, get it folks? For those who think you can’t slap cheap schlock together and earn millions from it, they clearly have never seen a Kimmel monologue before. 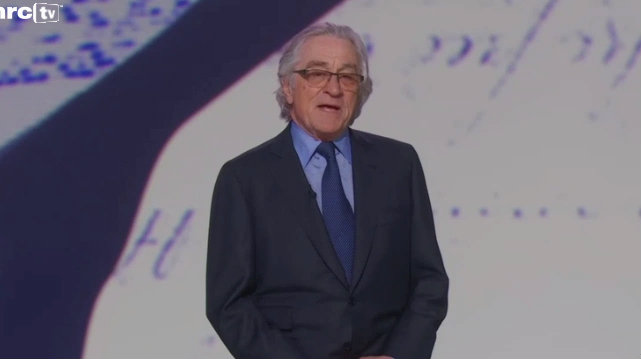 And rounding out the list, we have Robert De Niro doing what he does best. The sneering actor, whose reputation these days owes its existence to an undying hatred of the 45th president, jumped at the opportunity to talk trash at Samantha Bee’s TBS special, “Not The White House Correspondents Dinner.”

Firstly, De Niro’s performance was pitiable just for the fact that he was a guest of honor at an event produced in revenge for Trump’s dismissal of the White House Correspondents Dinner as beneath him, (tough to argue against that) and secondly, his monologue just involved more of the same uninspired hatred of the president that he seems contractually obligated to spew out.

On stage, De Niro raved, “I’m happy to stand with Samantha Bee tonight to support the First Amendment, the right of the President to be a relentless and unrepentant lying scumbag, the right of his supporters to not give a shit and our right to do something about it.” Medal of Courage, anyone? That same evening an unhinged and vengeful Sam Bee also got her petty digs in, blasting Sarah Huckabee Sanders for being “hideous as a pinworm in an anus. On the inside? That woman is 90 percent taint, and I mean that medically.” For people who find this kind of #resistance heroic, shame on you.

Methodology: MRC Culture compiled a list of anti-conservative/anti-Trump television programs during the month of April via MRCC's ongoing TV blog, and other notably biased clips from the month found online, including late night talk shows, network sitcoms, and shows from popular streaming services.