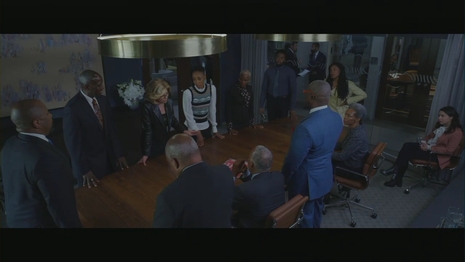 As a contributing writer for the MRC, I’ve seen the best and worst Hollywood has to offer over the years (mostly the worst). With Christmas fast approaching, I’ve decided to give Santa a little help and send him my Naughty list with the Top 5 Worst Shows from 2022 that I covered:

5. Coming in at number five is AMC’s debut drama 61st Street, whose entire theme was anti-cop hatred. They failed to point out the very serious issues with police attrition and lower hiring standards, as well as a tremendous spike in crime on Chicago’s South Side where the show takes place, and spread the lie that policing’s origins are from slave-catching patrols.

Here is the worst clip from the season in which they claim that policing is “just personal security for rich, white folks” and is beyond reform:

4. At number four is Disney-owned ABC’s drama A Million Little Things, which virtue signaled at every turn in its later seasons, something viewers found quite annoying. Go woke, go broke, as they say. Season 4 ended up having very low ratings with at least one episode in last place in its time slot.

In Disney’s world, parents are ignorant enemies who need to be enlightened by teachers, as A Million Little Things demonstrated with its storyline in which a student announces to her teacher that she’s not a girl. Of course, the student’s father just happens to be a former classmate of the teacher and was a racist bully to him.

Here is the worst clip from the season in which the teacher openly defies the parents and tries to offer them woke enlightenment:

3. ABC’s Roseanne used to be one of the few shows that leaned slightly right, but since Roseanne Barr got the boot and the show was renamed The Conners in 2018, it’s become progressively more left with each season. Season 5, which premiered in the fall, defended sexually explicit books in school libraries and claimed, “the planet’s burning up and we’re losing our rights to “fascist rule.”

But it’s season 4’s anti-gun episode, “Triggered,” which aired in March, that gets the worst clip prize, as Dan’s leftist granddaughter Harris gets praised for stealing his gun and selling it to the police for cash because he refused to get rid of it:

2. No Naughty list would be complete without an -ish franchise show, so coming in at number two is the highly racist ABC “comedy” black-ish, which thankfully ended after eight seasons of hating on white people for laughs.

From the show fangirling over Michelle Obama, claiming the American Dream is available to everyone except black people, encouraging people of color to use “white guilt” to get ahead, claiming predominantly white schools are racist and out to get black students, to promoting segregation, any one of these could have claimed the top spot.

But the worst clip comes from an exceptionally appalling episode where the show claimed stealing from white people is justified because people of color are owed reparations since white people are always stealing their ideas:

1. Finally, at number one, is the extremely leftist Paramount+ drama The Good Fight, which was unabashed in its hatred of conservatives. This season, thankfully its last, the show claimed conservatives will “trash everything” if they win.

Each episode continued to crescendo with hate as it painted the right as anti-Semitic, white supremacists out to murder and destroy. The writers also mocked unborn human life and labeled conservatives “crazy” and “evil.”

But it was the show’s brazen decision to have a character accuse Florida Governor Ron DeSantis (R) of sexual assault (a claim that ended up being untrue, since I’m sure the writers didn’t want to get sued) that gave us the worst episode clip:

Bah humbug and a lump of coal to these shows! I’ll be sure to continue watching in 2023 so you don’t have to. Stay tuned, and Merry Christmas!