Teacher Defies Parents of Trans Student on ABC Drama: ‘...In My Class, He Gets to Be Who He Is’ 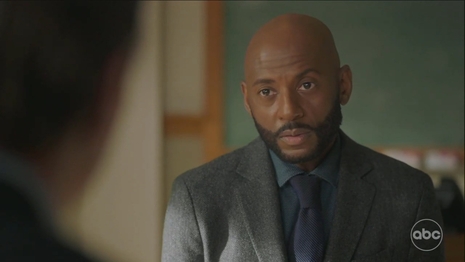 As the battle for parents’ rights in the classroom continues across the country, ABC’s liberal drama A Million Little Things continued to show where they stand on the issue by painting the parents of a transgender teen as cruel, racist fools while depicting the teacher as a hero who “gets it.” Remember that ABC is owned by Disney, the company that came out strongly against Florida’s “Parental Rights in Education” law.

On Wednesday’s episode, “Out of Hiding,” teacher Rome (Romany Malco) is preparing for parent/teacher conferences at Sussex Prep. After complaining that Sussex’s parents are stuck up and unable to talk about anything other than martinis and yachts, he tells his wife Regina (Christina Moses) he’s particularly concerned about his student Madison (Ash Spencer) who said she wants to go by “Maddox” because she’s “not a girl.”

It became clear in last week’s episode that Madison/Maddox’s parents weren’t okay with this decision.

“Maddox hasn’t been coming to my class,” Rome explains. “Madison has.”

At the end of class before the conferences, Madison/Maddox asks Rome to speak to her parents about the situation because he "gets it":

Madison/Maddox: Do you have a sec, Mr. Howard?

Rome: Oh, for you? Of course. And I really enjoyed the interview with your grandmother, although I think I'm a little scared of her now.

Madison/Maddox: Yeah, you definitely don't want to go head-to-head with her in Mahjong.

Rome: And, yeah, I wanted to ask you -- I noticed you shifted the lens from yourself to her. Are you not excited about that project anymore?

Madison/Maddox: No. No. That's not it. Um, it's my parents. They're not like you about it. You know, I chose Maddox because it feels right, but it's also at least similar to the name that they gave me. I thought it would be easier on them, but I was way off.

Rome: I'm so sorry. It must be really painful.

Madison/Maddox: Um, I've tried to tell them that I've always been like this, but they only see me as their little girl. So um, so, I was wondering, do you think that you could talk to my parents for me at your conference today? I mean, maybe if Clark and Isabelle hear it from an adult who gets it, they'll start to understand.

Madison/Maddox: Yeah, do you know him?

Rome: Yeah. We went to school together. Of course, I'll talk to them for you. I got your back.

You know things are going downhill when a teacher tries to play hero in opposition to the parents. And of course, the writers made Maddox’s father Clark (Sebastien Roberts) be one of the students who played a horrible, racist prank on Rome when they were students. The obvious goal is to vilify the parents as much as possible.

Clark actually apologizes for the prank at the conference, but it’s clear Rome believes “some people never change":

Clark: I'm telling you, this guy hasn't aged at all.

Clark: How ya doing? This is my wife, Isabelle.

Isabelle: Oh, it's a pleasure. I've heard so much about you from Madison.

Rome: Have a seat.

Clark: Listen, you know, before we get started, I just wanted to say, me and some of the guys didn't make it so easy on you back in the day, and, uh, it was wrong. And I want to apologize.

Rome: It was a long time ago.

Clark: But hopefully it's never too late to say you're sorry. And I am. Really.

Rome: Thank you. Let me start by saying what a pleasure it's been getting to know your child.

Isabelle: I have never seen her so excited about a class.

Rome: Oh, it's mutual. Maddox is one of my best students.

Clark: Maddox. Oh, so she told you?

Clark: Yeah. Uh, look now, we have to admit, this whole Maddox thing has been, uh -- it's been a lot to process.

Isabelle: Well, she's always had her things. There was her, uh, yoga obsession. And, then she was into crystals. And, then there was her Goth phase.

Rome: All due respect, I don't think what's going on with Maddox is the same as being way into The Cure. Uh, but we're here to talk about your child's academic performance. Now, the whole point of documentary filmmaking is to capture the truth on film. In fact, that's how I first learned of Maddox. And he is exceeding all of my expectations. Now, I know it must be really difficult letting go of yours, but while he's in my class, at least, he gets to be who he is.

Clark: Well, when you put it that way, it all makes perfect sense.

Regardless of where anyone stands on this issue, the audacity of a teacher to overstep the rights of parents this way is just mind-blowing! What’s scary is this is clearly a reflection of how many public school teachers seem to think in real life, hence the fierce debates happening at school boards across the country.

Since Sussex is a private school, though, parents have more power, especially if they’re a top donor as the Ainsworths are:

Rome: Uh-oh. Somebody narc on me, tell you I had candy in my lunch?

Dre: Hey um, we need to talk about what happened with the Ainsworths today.

Rome: What do you mean?

Dre: Rome, they're some of our top donors, and today, they somehow got the impression that you're at the root of what they're calling the "Maddox problem."

Rome: What? That's ridiculous. That's not even how it works.

Dre: They're insisting that I terminate you immediately or they're gonna pull all their funding.

Good for the Ainsworths! Of course, gender dysmorphia isn't a phase or something Rome caused. But he's definitely encouraged it without ever speaking to the parents. Until Madison/Maddox is an adult, it's up to the Ainsworths, and them alone, to research the issue and decide what course of action is best for their child without a teacher's interference. The same is true for every parent in this country.

Thankfully, this episode caused viewership to fall to its lowest point ever this season (interestingly enough, to an eerie 1.666 viewers), a whopping drop of 24 percent in key demo viewers and a 15.35 percent drop in overall viewers. It placed second to last among every show that aired the same night on all major networks.

But we are still heading down a slippery slope as the battle between parents and schools continues. If we don’t fight hard by pushing back against propaganda like this, it won’t be long before it’s considered “abuse” when parents fail to comply with teachers on these matters. Once that happens, teachers can, and will, report it to child protective services and have children removed from their homes.

See below for how you can join the fight for parents’ rights and stand up to this show’s dangerous propaganda.

Conservatives Fight Back! This episode was sponsored by Toyota, Liberty Mutual, and GEICO. Click each advertiser for their contact information so you can let them know how you feel about this propaganda.