ABC’s ‘black-ish’ Justifies Theft from White People as Form of 'Reparations': ‘These are My 40 Acres’ 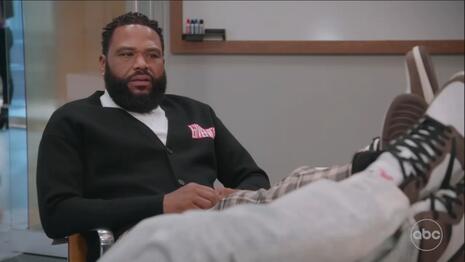 Just when you thought the -ish franchise of shows couldn’t be any more racist than they already have been, along comes an episode that sinks to a new low.

This time, ABC’s black-ish is the culprit as the show preached that white people shouldn’t be able to enjoy the things black people love or even eat at the same restaurant black people prefer. They even went so far as to justify stealing from a white person, because black people are owed “cultural reparations.”

Tuesday’s episode, “Sneakers by the Dozen,” started out innocently enough as Dre (Anthony Anderson) showed off his vast collection of expensive sneakers and talked about his love of shoes. When he arrives at work wearing a rare pair of sneakers, however, he’s shocked to discover his white co-worker Griffin (Reid Scott) is wearing the same pair.

Dre’s son Junior (Marcus Scribner) sympathizes with his father’s disappointment, saying, “There is nothing worse than wearing the same pair of shoes as a man who was in a white fraternity.”

Dre decides he must one-up Griffin and tries to buy a new pair, but his underground contact ends up leading him to Griffin’s house for the sale.

After begrudgingly purchasing the shoes from Griffin, Dre has a conversation with his sons about deserving “cultural reparations” because “people” always steal their ideas. He later decides that stealing a pair of sneakers that Griffin leaves unattended at the office is a perfect way to obtain said reparations:

Junior: I didn't know you were back already. Did you get the shoes?

Jack: I didn't even think these were real. You could say these are worth more than my whole life, and I'd believe you.

Junior: A'ight? Oven fries are a'ight. Dad, these are your Moby Dicks. Actually, I think they might be made out of whale leather.

Dre: Yeah. You're probably right. Griffin messed it up for me, man, alright? We create so much dope stuff only to have it stolen from us. I swear to God, if I see one more white boy with diamond earrings and a fade, I might lose my mind.

Dre: Yeah, we need cultural reparations. We create too much stuff to be priced or pushed out. You know what? I'm done. Excuse me.

Junior: Well, if he's done, then I can probably just take these, right? We're about the same size.

Jack: Sorry, playboy. I can resell these and make a killing. Besides, everyone knows you stuff your shoes.

Dre: Here's the thing -- at some point, a line in the sand has to be drawn. People can't take and take and take from our culture without consequences. The "Back to the Future" shoes? I thought those were urban legend. We gave up jazz without a fight, and I'm not letting the same thing happen to something black people actually still care about. I'm about to liberate these shoes for the culture.

What a wonderful message to send at a time when looting and flash mob thefts are so rampant across the country, as the left either looks the other way or tries to justify it. I guess it’s not surprising considering the show promoted looting and arson in a previous episode.

As for cultural reparations, are we really supposed to believe a successful black man who can drop $15k for a pair of sneakers on a dime is supposed to be some sort of victim who should be compensated because white people enjoy jazz music and sneakers?

Unfortunately, the racism got even worse as Dre’s father Pops (Laurence Fishburne) complains about white people eating at his favorite restaurant:

Pops: Your mama and her switch don't care how much they're worth. Where'd you get them crazy things? They look like the shoes they wore when they faked the moon landing.

Dre: Yeah, I took them off this dude Griffin at my office.

Dre: Pops, you don't get it, alright? These are my 40 acres. My reparations for us giving them Yeezys, "Stankonia," and the Bankhead Bounce.

Dre: Yeah, but we should, Pops. We should. It seems as if they've taken everything and turned it into something with no context, no history -- something to be packaged and sold.

Pops: Yeah, I know. It's frustrating seeing little pieces of our culture ripped away from us. Did I ever tell you about this little barbecue joint in Inglewood? Had the best brisket I'd ever tasted.

Pops: Oh, it was my secret little spot -- until that damn Bobby Flay did his show down there. Next thing you know, I can't get my corner table 'cause there's white hipsters in there looking like skinny lumberjacks.

Dre: See? So, you stopped going.

Pops: No, I didn't, 'cause you know what, Dre? It doesn't matter who's sitting at the table next to me. That place is still mine.

Dre: I just don't know, Pops. I mean, I used to love sneakers more than I love most of my kids. I just don't feel that fire anymore.

Pops: Stop trying to jump me in the line for reparations. Have a little respect.

Dre: Pops, when I get it, we get it. The truth is that black people create amazing things, so Pops is right -- trying to stop other people from liking it is as impossible as plugging a dam with a toothpick.

That sounded awfully segregationist. Do we really want to go back to those days?  It was wrong to do to black people then and it’s just as wrong to do it to white people now.

In the end, Dre says triumphantly, “This is my thing…I'm not letting anybody take that light.” I’m not sure how a white person liking the same thing as Dre steals his light, but okay:

Dre: I realized that it isn't about not having Jordans as a kid or even appropriation. I love being a sneakerhead, and I love sharing moments with other sneakerheads like my kids -- and even this guy.

Dre: Yeah, they're custom. You're looking at one of one. You'll never get a pair of these.

Griffin: Yeah, yeah. I'm into vintage vinyl now. In fact, our buddy in Compton [Bleep] set me up with this immaculate Jelly Roll Morton acetate that is just...chef's kiss.

Griffin: Keep an eye on those. Somebody's been boosting sneakers from the offices.

Dre: There's probably something I should tell you. I saw Josh walk into your office with a huge duffel bag. Mm-hmm. Eh, we all know I'm not getting any other kind of reparations.

For reference, Josh is white. Of course. How this show gets away with such hateful, racist, and divisive propaganda every week under the cover of comedic entertainment is beyond me. Viewers aren’t happy, however, as is evident in the steadily decreasing ratings. Thankfully, this is the last season, but the end really can’t come soon enough.

Conservatives Fight Back! This episode was sponsored by Ford Motor Company, and Toyota. Click each advertiser for their contact information so you can let them know how you feel about this episode.