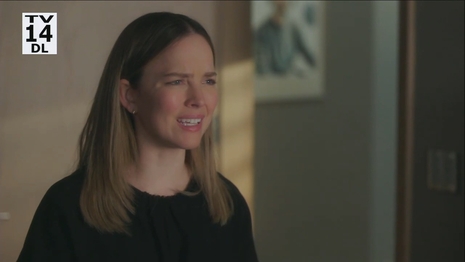 ABC’s prime-time drama A Million Little Things has already well established itself as a vehicle for pushing liberal lectures onto viewers. But the show's latest episode, “Fresh Start,” was like a woke trifecta, hitting on three favorite leftist topics - race, homosexuality, and abortion. And for the second time, the show put in a plug for abortion giant Planned Parenthood just because they can.

The racial storyline was one we can all agree on this time, unlike in the past, as a main character reflects on a painful memory of being the butt of a cruel, racist prank that school authorities did nothing about.

The gay storylines (yes, there are two), were just cringeworthy. In one, an adult character encourages his friend’s runaway minor child to make himself look like “a delicious piece of man candy” to make his cheating ex-boyfriend jealous. In the other, an ex-husband asks his ex-wife who is now a lesbian if it’s easier for her to please her new female lover because, as a woman herself, she knows her “way around town.”

The abortion storyline was extremely egregious. It began as radio talk show host Maggie (Allison Miller) receives a call from a woman who is facing an unplanned pregnancy:

Maggie: Uh, Anonymous in Charlestown, you are "in the room."

Caller: Um, hi, Dr. Bloom. So, I'm a single mom of two little ones, and they are the greatest joy in my life. I work days, and I'm also going to night school to become a nurse.

Maggie: Wow. That is all very impressive.

Caller: Thank you. I'm lucky that my family helps with my kids. But the thing is... I'm pregnant again. No one even knows yet. This wasn't planned, and I just know that I can't give my kids everything they need if I have this baby. I'd have to quit school, which is something I'm doing for their future. And, well, I just... I don't have it in me to... Oh, God. I'm sorry. I just...

Caller: It is. Which is why I've decided not to keep it. It's definitely the best decision, but I don't know how to tell my family. They're religious, and I'm afraid they will think less of me.

Maggie: I know that ending a pregnancy can be delicate, which is all the more reason to surround yourself with people who are supportive of you. Do you have anyone you can lean on?

Caller: Maybe some of my friends, but I'm not sure.

Maggie: I understand. Uh, well, we can give you access to resources like the closest safe clinic for you to go to.

Jane's Assistant: Jane, I have Mr. Cutler on the line for you.

Caller: Do you think I should tell my family about it?

Maggie: I think you should do whatever is best for you.

Jane: This is Jane.

Maggie: What do you think would happen if you were to not tell your family?

Caller: I'm not sure. I guess I hadn't thought about it because... I want to be able to tell them everything.

Maggie: Well, it's your right to keep this private, if you want to.

Caller: Thank you. That really helps.

Maggie: Good. Stay on the line for resources. And that is our show for today. Thank you for listening.

How about giving her resources to continue her education and obtain good childcare, so she doesn’t feel compelled to end the life of her child in order to succeed? How about reminding her she’s more capable than she believes and that she can care for all her children without having to sacrifice any of them? Or, what about informing her on the statistics of how many desperate couples are waiting to adopt, raise, and love a baby like hers? Of course, none of that was mentioned.

After the show, Maggie learns from her boss Jane (Stephnie Weir) that she’s in hot water with the station’s owner, which the show’s writers felt was an opportune time to take a dig at conservatives:

Jane: Maggie, you cannot give your listener that kind of information.

Maggie: I give resources to all my callers.

Jane: Not when it comes to that subject. Talk radio has one of the most conservative audiences, and if you think they're buttoned up, you haven't met Mr. Cutler, who owns the station and your show.

Maggie: Yes, obviously, I know that Mr. Cutler is conservative. We're grown women, and we call him Mr. Cutler.

Jane: It is an easy fix. Your producers just need to screen the calls better, and the next time the A-word comes up, they're not gonna take it.

Maggie: They most certainly are going to take it if a call comes in about abortion. Jane, come on. You are the one who told me that to make my show meaningful, I needed to connect to people on a deeper level. I can't think of anything that goes deeper than this. I mean, what would you do in my situation?

Jane: It is best to just avoid a topic that is so political.

Maggie: Except it is not political. It's personal. For that woman who called and for every single person who's ever had to face that decision. Supporting those women is way more important than cowing to some male executive's wishes.

Jane: I support women. I have supported women my whole career. You and I, we managed to infiltrate a boys' club, and in order to stay here, we have to make some concessions. Talking about this on the air is going to have consequences. I wish that were not the case, Maggie, but it's the reality.

Maggie: Then I will face the consequences.

Maggie ends up doubling down when she goes on the air again, mentioning the abortion she had just last year:

Maggie: Before I go, I want to share something that came up in my morning show. I bring this up not because I'm trying to convince anyone of anything. It's actually the opposite. I want to talk about this because I felt pressured not to. But I am ready to face any consequences that come of what I'm about to say. Which is that... I had an abortion last year, and it was 100% the right choice for me at the time. Also made that choice knowing that I want to be a mom someday. I always knew that I would want to be a parent when I am prepared for it physically, emotionally, professionally, and financially. And those are just a fraction of the many complicated circumstances around my choice to have an abortion, but every single person who faces that choice has their own unique circumstances, and that is what makes that decision personal to them. Not political. Personal. It is no one else's place to judge or shame any woman for deciding what is best for her. So, if you need information on abortion or contraception, please visit the Planned Parenthood website at PlannedParenthood.org. Thank you for listening.

Maggie is already a mom. Having an abortion doesn’t change that; it just ended the life of her child. Of course, no one should judge or shame women who choose abortion. Neither should anyone capitalize on their fear and desperation during a crisis pregnancy to promote an abortion agenda. But that’s exactly what Planned Parenthood does.

Planned Parenthood has ample resources to offer prenatal care, but they don’t, and it’s obvious why. It’s the same reason this show didn’t plug adoption agencies or crisis pregnancy centers that help women choose life. Because their true agenda isn’t to support women, it’s to promote abortion. Allison Miller, the actress who plays Maggie, went a step further by proudly tweeting that, in honor of all the "Mr. Cutlers" of the world, she donated to two additional pro-abortion organizations.

At the episode’s end, Jane is fired for not being able to “control” Maggie, but she’s happy Maggie didn’t censor herself because Jane thinks she was “amazing” and is doing “good work.”

Several viewers expressed displeasure at the show being too “woke” for them, while others complained the constant political lecturing has ruined the show they once enjoyed. Another said she was horrified by the abortion storyline. We couldn’t agree more.

Conservatives Fight Back! The episode was sponsored by Kohl's, VRBO, and CarFax. Click each advertiser for their contact information so you can let them know how you feel about the show's liberal preaching and pro-abortion propaganda.