New AMC Anti-Cop Drama ‘61st Street': ‘Defund the Police…We Have to Protect Ourselves!’ 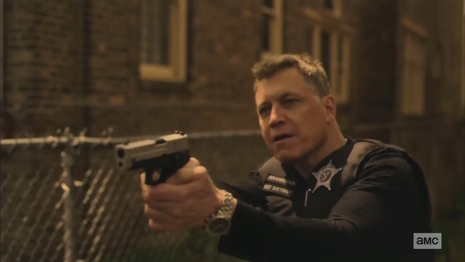 AMC’s new anti-cop drama 61st Street aired its second episode, “The Hunter and the Hunted,” Sunday, and it was just as bad as expected considering the pilot episode. They’ve made it clear their goal is to make all police look as bad as possible and sway public opinion against them.

On Sunday’s episode, the police continued their manhunt for Moses Johnson (Tosin Cole), who accidentally killed good cop Michael Rossi (Patrick Mulvey) when Rossi fell onto a large nail after Moses shoved him to escape. Just before the accident, Rossi divulged to his partner Johnny Logan (Mark O’Brien) that he had evidence of corruption within the department, and it appears Logan plans to continue Rossi’s work to uncover it.

Meanwhile, Lieutenant Brannigan (Holt McCallany) is one of the bad cops who has many officers working for him. So, the writers decided to have Brannigan be the one to talk about how hard police have it in today’s anti-cop climate, an obvious move to render this fact meaningless by having viewers associate it with corruption. He even goes so far as to urge Logan to lie about what happened at the scene of Rossi’s accidental death so they can “play” it to their advantage in order to gain public support:

Brannigan: You fired your weapon?

Brannigan: You sure about that?

Logan: He ran over the wall.

Brannigan: You sure about that? He didn't come at you? This is a moment, Logan. Everything that's been happening in our country -- we lost control of the story. Cops across America wake up feeling like we can't do our job. Or worse, we gotta say sorry for wearing the uniform. 'I'm sorry I'm a cop.' But with this, with a brother officer murdered on the street for doing his job, the story swings back our way. We play this right, and Michael Rossi won't have died for nothing. So, think about it. He ran, or he came at you?

Last week, Brannigan ordered his men to throw Moses’s brother Joshua (Bentley Green) into a river when he refused to give up Moses’ name. Now, Brannigan pretends to be a good cop who’s on Joshua’s side, while in another room, an officer who planted drugs in the Johnson’s home interrogates Moses’ and Joshua’s mother Norma (Andrene Ward-Hammond) and uses the drugs as blackmail:

Brannigan: They hurt you? I got you now. What if the cop who finds him isn't like me? What if he's like them? Clock is ticking, Joshua. He gets killed out there, that's on you. You can save your brother's life by telling me where he is. That's your responsibility.

Young: If you don't give them what they want, they'll connect the dots on their own. Then... God knows what's gonna happen to Moses.

Officer: Lady, we got you on possession with intent to distribute the drugs we found in your home, which matches the product we seized on the corner.

Norma: So that means what?

Officer: You're the warehouse. I'm not so sure that's a great environment to be raising a child. I'm kinda obliged to drop a note to protective services.

The writers even went so far as to have one character, Martha (Aunjanue Ellis), who is running for alderman, demand the police be defunded and shut down:

Martha: They closed down 60 of our schools because they wouldn't pay for them, and at the same time, they paid more for the police to be in those schools that they keep open. Now, what does that say about them and what they think about us? What do we do with an organization, funded by our tax money, when it chooses to hurt and kill the people it's paid to protect? What do we do with an organization when its members become criminals, when they become murderers? We stop funding that organization. Now, I want you to hear me when I say this, because I want you to know that I am not hiding behind any politician speak. Defund the police. Yes, we have to protect ourselves. We have to serve our community by shutting them down! It's gotta be us. Not them. Yeah, it's time to put -- it's time to put the South Side on the inside. Yeah.

At the episode’s end, Brannigan has Moses cornered at gunpoint, and he urges him to run so he has an excuse to shoot him. But Moses stays still as his mother and lawyer run to his rescue:

Brannigan: You heard what your mother said.

Brannigan: Run. So, go ahead. Run!

Franklin: Stop! I'm his lawyer. My name is Franklin Roberts, and I'm this man's lawyer.

Brannigan: You're under arrest.

Brannigan: Hands behind your back.

It’s a heart wrenching scene, but that’s the point. It’s meant to illicit sympathy for suspects and hatred for the police. And it's sadly working judging from the many tweets from people of color who are watching the show.

This type of hatred has led to a record number of officers shot on duty in 2021. Sadly, 2022 has already seen a 43% increase on top of those historic numbers. Is it any wonder why so many good officers have left their jobs in Chicago, leading to the city’s lowest staffing in recent history?

Real-life Chicago alderman and former police officer Anthony Napolitano told Fox News that Chicago has become “the land of the lost.” He continued:

Too bad Hollywood shows like 61st Street are so blinded by their agenda that they refuse to show what’s really going on.

Conservatives Fight Back! This episode was sponsored by Acura, Geico, and Capital One. Click each advertiser for their contact information so that you can let them know how you feel about this episode!