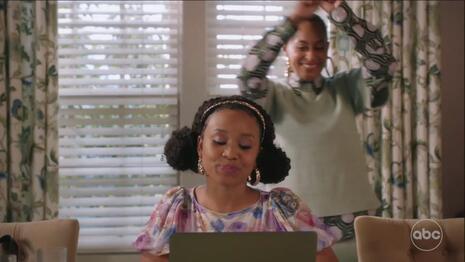 Last week, ABC’s racist sitcom black-ish tried to argue that the American Dream “can be yours…unless you’re black,” and people of color must be perfect because their path to the American dream is “so narrow.”

On Tuesday’s episode, “Mom Mentor,” however, the show completely contradicted itself by admitting that playing on “white guilt” gives black people a competitive edge.

Apparently, they don’t seem to realize they’re admitting that their sacred woke ideology is a tool of manipulation meant to prey on the very people who buy into it the most - basically every white, self-proclaimed “anti-racist" liberal, who thinks they’re being sympathetic and an ally when they’re really being played for fools.

Again, the show wasted no time in getting right to the race-baiting, divisive point, as the opening montage, voiced by main character Dre (Anthony Anderson), featured his wife Bow (Tracee Ellis Ross) cheering gleefully as her son’s girlfriend Olivia (Katlyn Nichol) follows her advice to not “be afraid to sprinkle in a little bit of white guilt,” on her college applications to increase her chances of being accepted:

Dre: When your kids are old enough to start dating, you hope they don't pick duds. And when Junior picked Olivia, Bow realized he picked a winner.

Bow: If this was a real hospital, you would totally get fired for making out in the operating room. You cannot do that.

Dre: They were growing closer and closer...

Olivia: "And that's why it would be an honor to get a master's degree from your fine institution."

Bow:  Mm-hmm, mm-hmm, mm-hmm. Okay, so, this application is an opportunity for you to show them who you are.

Olivia: "...And provide help for those that need it the most."

Bow: Whoo! Yes! That's what I'm talking about. That's it.

Olivia: That's it. That's the one.

Bow: That's the one. There you go!

Note that Olivia is going for her master’s degree, and she was accepted into the University of Southern California (USC) and Yale University -- hardly someone who is a helpless victim who can’t reach the American Dream. And she didn’t have to be “the greatest” in order “to get even a tiny drop of that respect (she) deserve(s),” as Dre whined in last week’s episode.

No, all she had to do was manipulate “white guilt” to her benefit. I don’t remember hearing anything about that tactic in any of Martin Luther King, Jr.’s speeches, do you? In fact, every bit of woke propaganda this show puts out is an insult to his legacy.

Let this episode be a wake-up call to every white, liberal, self-proclaimed “anti-racist” ally. You’ve been played, and they’re not even ashamed to show it.

Conservatives Fight Back! This episode was sponsored by Disney and Otezla. Click each advertiser for their contact information so you can let them know how you feel about this episode.