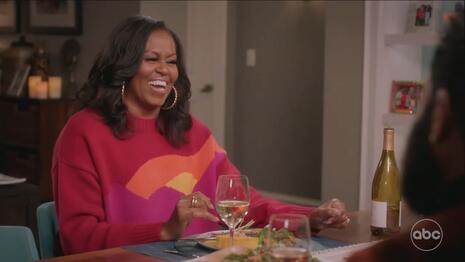 ABC’s racist comedy Black-ish fan-girled so hard over former First Lady Michelle Obama during her cameo appearance on Tuesday’s episode, “That’s What Friends Are For,” you’d think she was Jesus. Or, should I say “black Jesus,” since that’s how the show referred to Christ twice during the same episode. Because, of course, everything must be racial.

“This is an event for a great cause,” Bow pleads. “Look, ‘When We All Vote works to change the culture around voting and increase voter turnout by helping to close the age and race gap at the polls.’ Plus, it says there's a special guest.”

For context, When We All Vote is a voting rights group founded by Obama.

Bow argues they need more couple friends, which Dre also dreads, complaining that all her friends have “duds” for husbands, leaving him bored while the women have a good time. But Dre attends the event with Bow, sure that the special guest is John Legend because, “it’s always John Legend.”

As it turns out, the special guest is Michelle Obama, which sends Dre and Bow into a state of awe and wonder as if the heavens had opened and “black Jesus” himself came down:

Dre: We've been here for an hour. Can we put these spinach puffs in our pockets and break out of here?

When Bow and Dre arrive home, they can’t help but brag to their family about meeting Michelle, describing it as “magical,” which then leads to a ridiculous cartoon dream sequence in which the Obama worship is laid on thick. The couple then announce that Michelle is coming over for dinner which the family reacts giddily to:

Ruby: Hey! What y'all lookin' so happy about? Did you make my baby take marijuana?

Bow: What?! No, we just, um... We met somebody special. Like, special special.

Dre: They might not want to hear about who we met tonight.

Dre: It was Michelle Obama!

Junior: Are you sure it was really her? You've been fooled by Barack Obama impersonators before.

Dre: Okay, he was pretending not to be himself so he wouldn't draw a crowd, fool.

Bow: And we know it was her because we connected like we've known each other forever, and we had a conversation that was about being parents, professionals, and honestly, it was -- what's the word? Oh...

Ruby: How do you know she feels the same way about you?

Pops: Yeah. This is the same boy who thought he made eye contact with Janet on the Rhythm Nation tour. And then he went back to school, telling everybody that she was his girlfriend.

Dre: She looked into my soul.

Bow: We know because I got Michelle Obama's phone number.

Dre: And she will be joining us for dinner here Saturday night.

Olivia: Oh, my God, this is amazing!

Junior: I am gonna start workshopping ideas on how to greet her. “Hello” does not feel special enough!

When the family finds out they’re banned from the dinner, they react with indignant outrage. And, Junior (Marcus Scribner) even goes so far as to call it “child abuse.” But Pops has a plan that once again sends the family into blissful Obama worship. Even their neighbor can’t help but join in the frenzied obsessive behavior:

Pops: Hold on, hold on! We understand and appreciate all that you do for us. And if you want this evening to yourselves, we will honor your request. I neither understand or appreciate what Rainbow and Dre are trying to do, nor do I feel any need to honor their request. This is madness.

Ruby: We have a Black Jesus given right to meet this woman!

Pops: Now, y'all know how I feel about somebody from the government coming' in this house. But we talking' about Mrs. Michelle Obama. Come on!

Jack: It's only right.

Diane: And who do they think they are?

Jack: Exactly, we're the teenagers. We're the ones supposed to be ditching them, not the other way around.

Junior: And it's not like I even want to hang out for long. I just want one photo that I can rub in the faces of my enemies!

Olivia: Yeah, and I just want her to sign my copy of "Becoming" and tell me I'm enough.

Pops: I want to know if she still has connections who can look into pardoning certain youthful indiscretions from the 1960s so someone can get a passport again. You feel me?

Ruby: Alright, alright, alright! Then it's decided. We're gonna crash this party. Huh? Jack, go get me my disguise trunk. Go ahead.

Dre: The night of the dinner, everything was in place to welcome Michelle Obama into our humble home.

Bow: Babe, do you know what's weird about this?

Bow: Is how not weird it feels.

Bow: Mrs. Obama is just so warm and -- and down-to-earth. Do you know that I sent her a confirmation text, and she sent me back a dancing-lady emoji.

Janine: Hi. I thought I would do the neighborly thing on a Saturday night and bring over my famous tuna-zoodle casserole. Can I come in, please?

Janine: Alright, look, I put two and two together when the Secret Service interviewed me. I know Mrs. Obama is gonna be here. I just want to meet her.

Janine: I can pretend to be your maid.

Janine: A white maid! I mean, wouldn't that be something?

Ha ha? The family later interrupts the dinner several times to meet and fawn over the former first lady, but she handles it with grace and kindness being the "black Jesus" that she is and all. The rest of the dinner goes smoothly as Bow and Dre laugh with Michelle about the challenges of parenthood among other topics.

Afterwards, the couple texts Michelle to invite Barack to their next dinner together, and excitement fills them as they discuss all the perks of being friends with the Obamas. But Michelle bursts their Obama obsession bubble when she tells them Barack is too busy working on his next book, leaving Dre distressed and realizing he’s the “dud” this time in the friend couple.

Bow is delighted that she still gets to hang with Michelle, though, and Ruby and Pops are riding on their Obama high, speaking in fancy British accents while Ruby dons a crown because they got to make a “real connection” with her.

Maybe the real, medium-toned Jesus will make an appearance soon and save us from any future Obama obsessed lovefests from Hollywood? One can only hope.

Conservatives Fight Back! This episode was sponsored by GEICO, Liberty Mutual, and Toyota. Click each advertiser for their contact information so you can let them know how you feel about this episode.