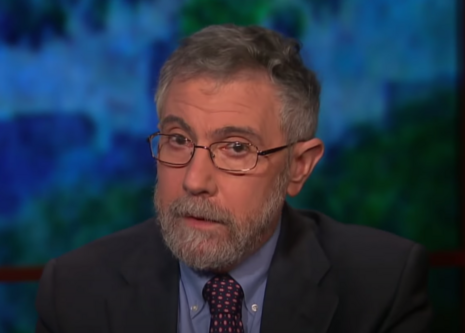 New York Times blowhard economist Paul Krugman is trying to cope with not getting the “blue wave” referendum on Trumpism he wanted out of the 2020 election.

Now, Krugman has said that a potential GOP senate majority will be — wait for it — “bad for business.”

Krugman whined in an op-ed headlined “A Republican Senate Would Be Bad for Business” that “the blue wave fell short of expectations,” and he fear-mongered about Senate Majority Leader Mitch McConnell (R-KY) still maintaining his control. “Big business seems happy with this outcome,” Krugman quipped.

He also stated that “[c]orporate interests appear to imagine that they will flourish under a Biden presidency checked by Republican control of the Senate.” But, griped Krugman, “big business is wrong. Divided government is all too likely to mean paralysis at a time when we desperately need strong action.”  By “strong action,” Krugman means a drastic American shift towards a leftist utopia.

If this wasn’t pathetic enough, Krugman tried to explain himself by alleging that Republicans would be responsible for possible COVID-19 deaths in the winter if they obstruct former Vice President Joe Biden’s agenda:

Why? Despite the vaccine news, we are still on track for a nightmarish pandemic winter — which will be made far worse, in human and economic terms, if a Republican Senate obstructs the Biden administration’s response. And while the economy will bounce back once a vaccine is widely distributed, we have huge long-term problems that will not be resolved if we have the kind of gridlock that characterized most of the Obama years.

Krugman must have forgotten The Wall Street Journal Editorial Board recently reported that Biden’s tax, health-care, energy and regulation proposals would lead to “$6,500 less in median household income by 2030.” Not only that, but Biden’s plans are projected to reduce “real GDP per capita by more than” a whopping “8 percent.”

But making coherent economic sense isn’t really Krugman’s strong suit. How do we know? In the eighth paragraph, Krugman managed to fret about how the “exploding pandemic will bring immense economic hardship,” while at the same time referring to governors imposing new economic lockdowns that could lead to “a new wave of jobs losses” as being “responsible.”

Krugman’s solution to the economic plight he’s fear-mongering about: Trillions in new government spending, which undoubtedly would mean substantially higher taxes. He continued:

What we need, clearly, is a very large-scale program of disaster relief, providing families, businesses and, not least, state and local governments with the help they require to avoid financial ruin until a vaccine arrives. And you might think that a Republican Senate would be willing to work with the Biden administration on such an obviously necessary program. That is, you might think this if you’ve been hiding in a cave for the past 12 years … We desperately need to spend trillions on repairing our crumbling infrastructure, caring for our children and meeting the urgent need for action against climate change.

If this is the kind of unicorn solution Krugman is looking for in a Biden presidency for the nation’s economic recovery, then it’s probably best that the government remains deadlocked.

Conservatives are under attack. Contact The New York Times at 800-698-4637 and demand it distance itself from Krugman’s championing of Bidenomics and anti-conservative bias.