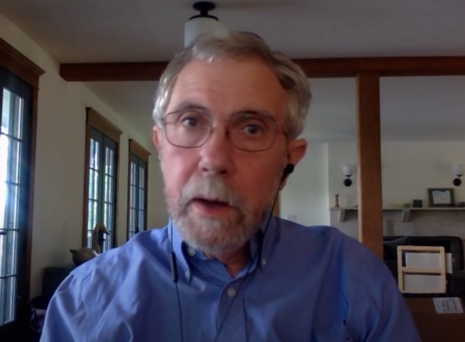 In a piece headlined, “The Very Strong Case for Bidenomics,” Krugman argued that “The former vice president’s tax and spending claims are credible; Trump’s aren’t.” Fascinating, given that Biden hasn’t been consistent on his tax and spending claims. According to Krugman, “Joe Biden claimed that his tax and spending plans would create millions of jobs and promote economic growth. Trump claimed that they would destroy the economy.” Then came the knee-slapper: “Well, everything we know suggests that Biden was right and Trump wrong.” [Emphasis added.]

Krugman attempted to bolster his claim that he wasn’t “the only one saying this” by pointing to how “Nonpartisan analysts like Moody’s Analytics and the not-exactly-socialist economists at Goldman Sachs are remarkably high on Biden’s proposals.” As is typical with Krugman, he’s being disingenuous. Moody’s Analytics Chief Economist and “registered Democrat” Mark Zandi has donated exclusively to Democrats in the years Trump has been in office. He is also a Hillary Clinton donor.

Current Goldman Sachs Chairman and CEO David Solomon, on the other hand, also donated exclusively to Democratic candidates this electoral cycle, according to Federal Election Commission data. Also, Goldman Sachs has contributed $2,955,072 to politics this cycle collectively between PAC, individual and soft money donations, according to Open Secrets, with the majority of contributions going to Democrats by a 63.56 percent to 36.44 percent margin.

Krugman’s biggest selling point on “Bidenomics”?  “Biden’s plan would roll back that corporate tax cut, replacing it with spending programs likely to yield much more bang for the buck.” [Emphasis added.] He continued: “In particular, much of the spending would be on infrastructure and education — that is, outlays aimed at strengthening the economy in the long run, as well as boosting it over the next few years.” He again pointed to Moody’s and Goldman Sachs, who Krugman said ran models showing increases in GDP if Biden’s plans were implemented.

Krugman must have forgotten that Moody’s, in particular, had issued a report in 2016 that — so far — wrongly predicted “the Trump economic plan would be disastrous for the U.S. economy, leading to a prolonged recession and causing slower growth, higher unemployment and declining asset values,” according to The Fiscal Times.  Krugman even conceded that “The economy did in fact add many jobs under Trump before the coronavirus struck.” But Krugman falsely stated that this was a “continuation of an expansion that began under Barack Obama.” That’s still quite a concession, given that this is the same person who made the prediction prophesying an economic disaster under Trump in 2016 before retracting it later. [Emphasis added.]

Under the Obama-Biden economy since 2009, the “number of employed Americans increased by 9.9 million, but there were 14.6 million more who left the labor force.” [Emphasis added.] Krugman apparently didn’t consider this when praising Biden's plans.

Krugman asserted that “you should also know that Biden’s assertions that his plan would give the economy a significant boost are well grounded in mainstream economics and supported by independent, nonpartisan analyses.”

That’s funny, given that economist Christos Makridis recently released a co-written op-ed with private investor Jonathan Nauert  showing that “estimates by the Tax Foundation suggest that [Biden’s] plan would shrink the economy by 1.5 percent.” So much for being “well grounded in mainstream economics.”

Conservatives are under attack. Contact The New York Times at 800-698-4637 and demand it distance itself from Krugman’s leftist analysis of Trump and Biden’s economic plans going into the 2020 elections.