If you were going to tell me that 2019 would be filled with abortion plots, even more conservative hatred, and some serious blasphemy, I wouldn’t be surprised. After all, last year’s roundup hardly promised a good new year. However, the latest batch of liberal propaganda may shock and disappoint anyone, as television often does nowadays.

Check out the top ten worst liberal tv scenes of 2019.

NBC’s Will & Grace may be on its last season, but it’s still pushing out the terribly unfunny jabs at Trump supporters. The November 14 episode “The Chick or the Egg Donor” found Karen (Megan Mullally) and Jack (Sean Hayes) crossing paths with Amy (Vanessa Bayer), the bakery owner from one of last year’s worst scenes who refused to bake a MAGA cake. The most recent scene doubles down, claiming America loves “racist jokes.”

Liberals have been pushing the “punch a Nazi” mindset for a few years now, but this year, CBS All-Access’s The Good Fight takes it to an even worse level. The April 11 episode “The One where a Nazi Gets Punched” starts off with dehumanizing Republican stereotypes and ends with the show literally advocating violence. To quote Jay Di Persia (Nyambi Nyambi) in the following clip, "There's no better way to show some speech is not equal, some speech requires a more visceral response.”

Everyone remembers the media disaster surrounding the Covington Catholic high school boys. NBC’s Law & Order: Special Victims Unit kept the liberal fantasy going, despite the threat of a lawsuit against NBC from Sandmann’s family, with its May 9 episode “Assumptions.” Although the fictionalized kids are mostly exonerated, they’re still portrayed as an angry, bigoted mob.

Really, any episode from HBO’s Euphoria could have qualified for this list. The teen drama is essentially outrageous pornographic sexual trash with over fifty penis shots in just one season. In fact, just about the only scene that can be shown is one from the August 4 finale “And Salt the Earth Behind You” featuring a stylized teen abortion.

The adult-oriented animated Netflix series Big Mouth aired its third season this year which should further wither our faith in humanity. The series, which focuses on the sexualities of middle school students, went further on October 4 when it featured new student Ali (Ali Wong) describing pansexuality to a class. The scene was so bad that the creators were actually forced to apologize for being “problematic and exclusionary” to the trans, pan, and bi communities.

6. Madam Secretary - ‘Hard to Claim You Love the Creator, If You're Ignoring’ Global Warming

While CBS’s Madam Secretary was living out the liberal dream of a Hillary Clinton presidency in its final season, the most outrageous moment happened in its March 17 episode “The New Normal.” There, the show had the nerve to have then Secretary of State Elizabeth McCord (Téa Leoni) and her husband Henry (Tim Daly) lecture Christians about global warming. In fact, the show claims, “It's hard to claim you love the Creator, if you're ignoring the profound harm being done to His masterpiece.”

Abortion has been an unusually popular topic in 2019 and you can thank Hollywood’s Planned Parenthood consultants for that. Within the onslaught of pro-abortion stories, one that sticks out the most is the Hulu series Shrill which featured an abortion in its very first episode on March 15. The actual abortion scene comes off as nonchalant while main character Annie (Aidy Bryant) says she feels "very, very good" about it and "very f*cking powerful."

8. How to Get Away with Murder - ABC Legal Drama Compares ICE Detention Centers to Japanese Internment, 'Torture of Children'

Illegal immigration was also a hot issue this past year especially portraying ICE agents as unfeeling at best or cruel at worst. ABC’s How to Get Away with Murder unfortunately gave us the latter in the October 3 episode “Vivien’s Here.” In the scene, law students compare Immigration and Customs Enforcement centers to Japanese internment camps and argue that they are akin to torturing children.

Fox’s music drama Star proved this year that liberal shows apparently can’t go far enough with sacrilegious behavior. In a disgusting display in the May 8 episode “When the Levee Breaks,” on primetime no less, the show gave us a rapper dressed up as the Pope surrounded by crucifixes and a choir in white. And don’t forget the gyrating nuns.

Unfortunately, no one’s taken a bigger hit from liberal shows than God Himself. In fact, TBS’s show Miracle Workers was almost entirely dedicated to depicting God as a lazy, inept idiot. The March 26 finale “1 Hour” pretty much sums up the show’s sentiment by calling God (Steve Buscemi) an “idiot” and a “moron” to his face.

Of course, this list wouldn’t be complete without at least one show bashing Trump, and there was no shortage this year. A good portion of them come from shows produced by Chuck Lorre and his various Trump-hating vanity cards. The Big Bang Theory’s May 2 episode “The Plagiarism Schism” in particular includes one of the worst with a vanity card claiming that Donald Trump has “untreated syphilis.” 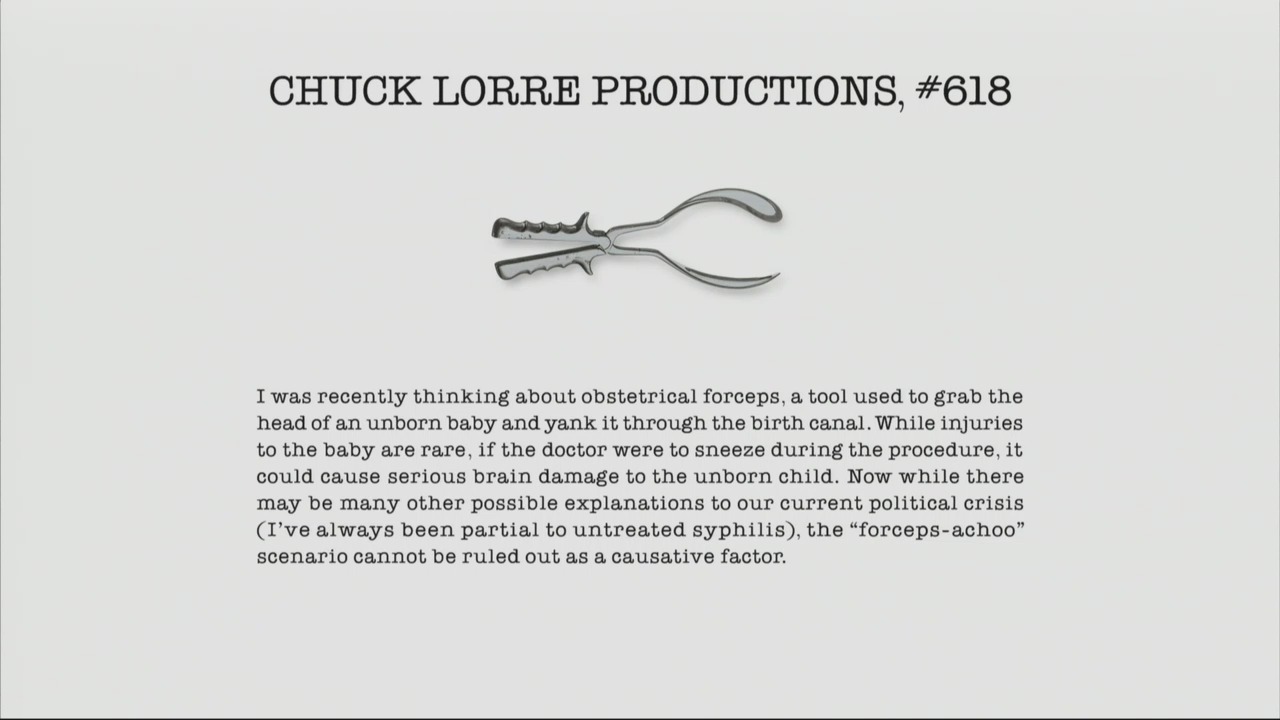 All in all, 2019 seems to have managed an even worse year than 2018. Let’s hope that trend stops in the new decade.