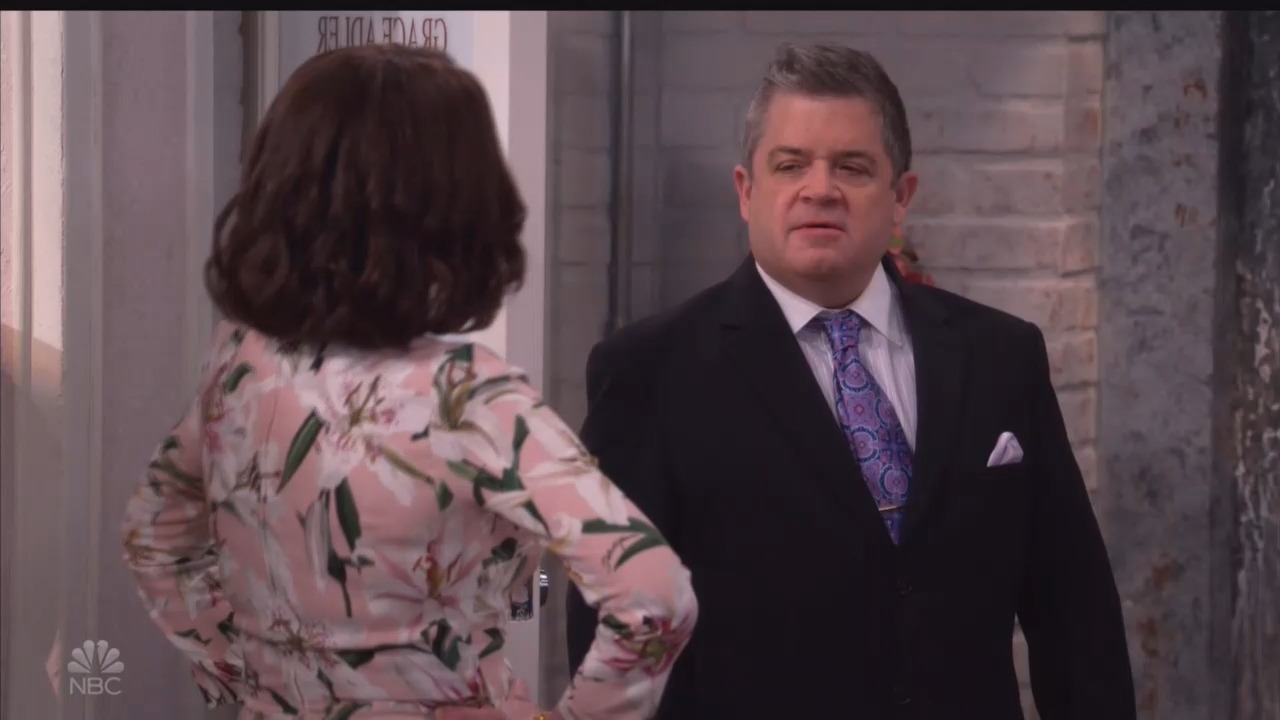 Well, this comes as no big surprise. Only four episodes into the new season of NBC’s Will & Grace and the political barbs have already begun again, complete with the tired, cliché accusations that Trump supporters are hate-filled, neo-Nazis. This time, the show even took a swipe at all of America, claiming it loves "racist jokes."

Thursday’s episode, “The Chick or the Egg Donor,” featured a guest appearance by liberal actor Patton Oswalt, so perhaps he’s responsible for bringing the political jabs back. Oswalt played conservative caricature Karen’s (Megan Mullally) ex-brother-in-law Danley who has purchased a struggling baseball team in her name as a joke to get under her skin.

While Karen and Jack (Sean Hayes) are brainstorming ideas on how to save the team, Karen orders food, which is delivered by Amy (Vanessa Bayer), the bakery owner who refused to bake a MAGA cake in a previous season:

Karen: Come in. I ordered some brain food to help us think.

Jack: Ooh, I was wondering if we were ever gonna take a break.

Karen: Honey, you're gonna have to be a lot more specific than that. Wait, if you're Lori Loughlin's kid, I told her no one would buy you as a varsity rower.

Amy: You ordered a MAGA cake from my bakery. It sent my life into a death spiral. But now, I push muffins door to door in office buildings. Hakuna matata!

Jack: Wait, I remember you. Grace and Karen turned your bakery into a hub for neo-Nazis. Hey, how's that going?

Amy: Well, it's closed now because it's been officially designated a hate space, so now I bake in my studio apartment. I mix the batter in the tub.

Karen: Jackie, what if we change the name of the team? Instead of the Millstones, we find a name America will love, like the Racist Jokes.

Karen’s plans to save the baseball team from disarray are a mess, including wanting the team to dress in rhinestones and have drugs be mandatory instead of having mandatory drug testing. Danley takes much pleasure in her inability to rescue the team and quips, “This just keeps getting better and better. It’s like the political legacy of Paul Ryan.”

Yeah, I’m not laughing either. With the 2020 election getting closer and closer, it’s probably a safe bet to expect more of the same, if not worse, from this liberal political agenda disguised as a sitcom.