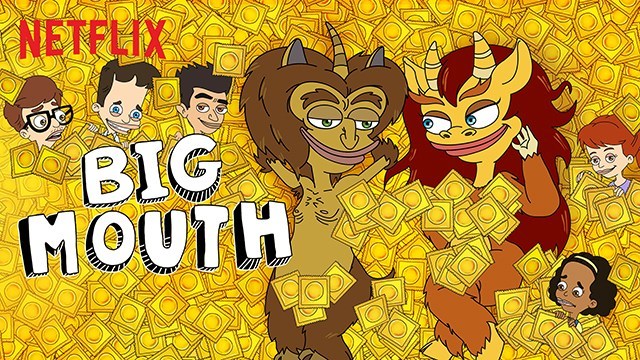 Jay (Jason Mantzoukas) confronts his sexual confusion in Episode 3 titled “Cellsea.” He fluctuates between thinking he is gay or bisexual. He is relieved to find a Canadian Netflix show that includes a pansexual character. The show teaches that there is a spectrum of sexuality – “The modern world is a sexual cornucopia.” After defining andro-sexual, bisexual, cis, demi-sexual, omnisexual, pansexual and polysexual behavior, Jay decides he is bisexual.

In Episode 8 titled “Rankings,” Jay announces he is bisexual on the school television show. While the other boys are coming to grips with that revelation, a new character is introduced. Comedian Ali Wong portrays the new girl, Ali, who tells the class that she is pansexual when the teacher introduces her.

Ali describes pansexuality as liking “boys, girls and everyone in between” and she dismisses everyone else as "borings." “Sexuality isn’t limited by gender identity,” you see, and “Bisexuality is so binary.” Remember, these are twelve and thirteen-year-old kids.

Hilariously, the Big Mouth creators were forced to apologize trans, pan, and bi communities for this scene being problematic and exclusionary.

The hot button issue of toxic masculinity is introduced early in the series. In Episode 2, titled “Girls Are Angry, Too,” Jay cuts off the tip of Andrew’s (John Mulaney) finger in shop class when he is distracted by a girl’s skimpy outfit. The Dean of Student Life responds to the accident by implementing a dress code and shaming the girls for their wardrobe choices. Feminist Jessi says the dean is a fake feminist who plays into rape culture by inferring that women ask to be raped by wearing short skirts. The girls hold a slut walk to protest the new dress code.

The boys are confused about the slut walk. The girls are in sexy clothing but don’t want the attention of the boys who notice them. When Andrew vlogs about how hard it is to be a boy, he is invited to attend a meeting of a men’s rights group called “Men 4 Equality,” which turns out to be a white supremacist Nazi group. Their stated goal is to produce a patriarchal ethno-state of pure European blood. Andrew quickly flees when he realizes what this group is.

I wish that I could say that this is the final season of this raunchy, inappropriate cartoon but that isn’t true. The series has been renewed by Netflix for an additional three seasons.