Sarah Silverman’s ‘I Love You, America’ Returns, Now With More Hate for Conservatives 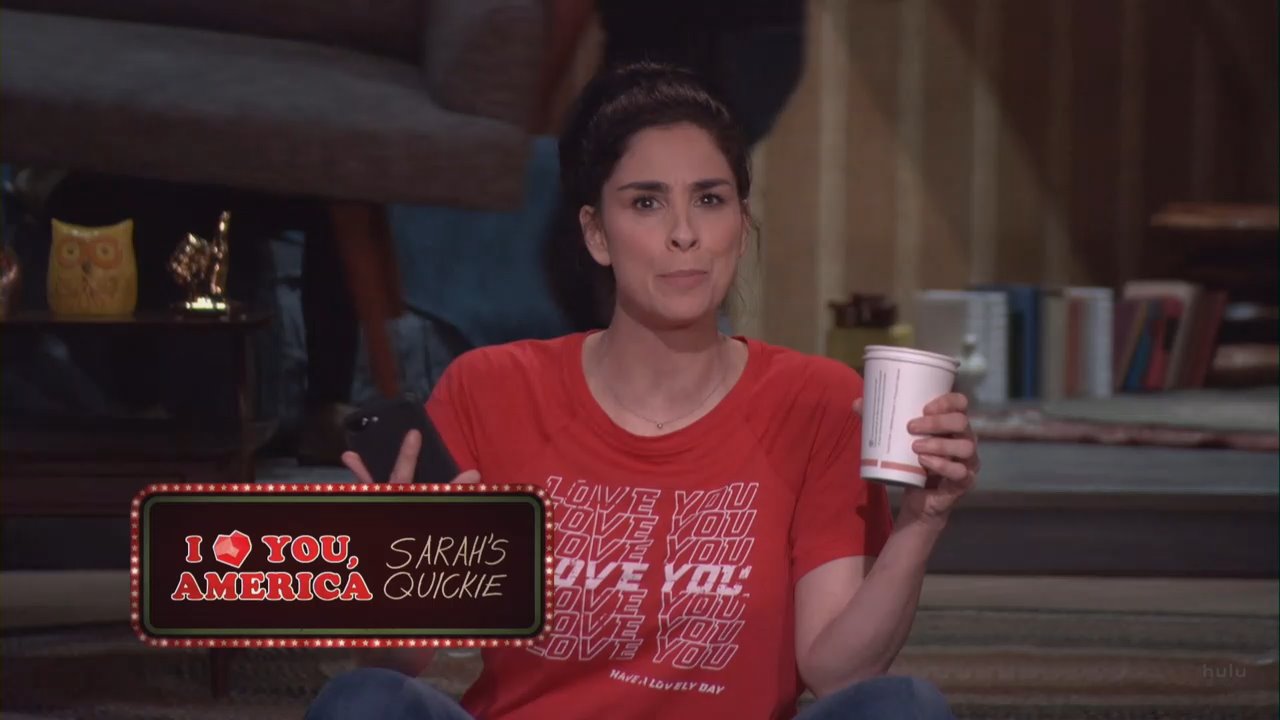 Fans of Chelsea Handler and Michelle Wolf should rejoice. While Netflix had the good sense to cancel those shows, Hulu’s I Love You, America with Sarah Silverman has somehow returned despite a horrible, terrible, no-good, very bad first season. For a show that claims to “love” America, it sure hates a good part of it.

The September 6 episode kicks off with Silverman "knocking out an epic takedown" as she's reading the news on her phone before the show. First, she gives us an outright promotion of Bob Woodward’s Fear, mostly because it makes Trump look bad. Then, she gives an outright condemnation of Republicans over the Supreme Court nominee hearings calling them "unprecedented." Like every other liberal in the media today, she doesn’t seem to be a fan of Brett Kavanaugh. In fact, she warns that his lifetime appointment as Supreme Court Justice would "affect every vulnerable person in America negatively until the day he dies, until the devil comes to collect his soul.”

Good to know that she’s not even trying to represent the other side anymore.

Do you think we get a break after that heavy-handed take on the judicial confirmation process? Nope. That’s only the first three minutes of the episode. In her opening monologue, she starts warning her audience about the “liars” who want to divide the country. Apparently, liars in politics have only existed since 2016, so she needs to warn us of the dangers of dishonesty and fear-mongering that are unique only to the Trump Era. This is coming from the person claiming Kavanaugh is somehow a literal threat to Americans.

Of course, Silverman only attributes lies to conservatives. She mocks those claiming “liberals want to take your guns” (which is true) and that “Mexican immigrants are rapists” (which the president never said). It’s ironic that she claims conservatives think “what behooves only them [is] what’s best for America,” but then proceeds to lecture to us what she thinks is good for America. Self-awareness is clearly not her strong suit.

She then somehow connects the notion of lying liars to the Colin Kaepernick controversy and how people are trying to besmirch this man who “risked everything to expose injustice.” I wish I was exaggerating.

Sarah: Look, tonight’s the first game of the NFL season, right? And there’s already anger over Nike’s deal with Colin Kaepernick, a man who risked everything to expose injustice. How totally un-American. And politicians will once again roll out their stock takes on why players are kneeling during the National Anthem.

Paul Ryan: It’s misguided to protest the anthem and the flag.

Matt Gaetz: They indict our country, our service members, our first responders, our founding fathers.

Sarah: Okay, those are lies. All of those people know the players are not protesting a song. And they pretend to think that players are protesting our national anthem, our military, our flag, when they know - they know - that they are protesting police brutality. The players have all been very transparent about that because it’s what they are literally trying to bring attention to. And I hate that I just ended that sentence with a preposition. I can fix that. Sorry, I’m usually a stickler.

The episode is sadly only half-over when we move to our next segment: speaking to the pro-life group Survivors of the Abortion Holocaust. While this could come off as reaching out to the other side, it quickly becomes clear it is anything but that. For every scene she has with members of the pro-life group, it’s contrasted with an interview with abortionist Dr. Willie Parker. While she’s posing questions to the pro-lifers, she’s taking down “anti-choice” strawmen with the abortionist. Heaven forbid we believe she just wants to learn about pro-life ideas.

After the entire segment, she still declares the group wants to “take away women’s rights while co-opting the Holocaust” before ultimately declaring “we’re all human..except for fetuses, according to science.” Well, except science disagrees, but it looks like Sarah isn’t interested in that. It’s almost like the segment was for nothing.

She then ends the episode speaking with NFL players Malcolm Jenkins and Doug Baldwin on the controversy over players kneeling during the National Anthem. Many of the same comments from earlier come up as they degrade the NFL’s “unpatriotic” choice to clamp down on the protests.

While both players are leagues ahead of Kaepernick personality-wise, none of them seem to understand that it’s not simply the act of protesting that people despise. It’s doing it during the National Anthem, a time where we are supposed to be united as a nation. Feel free to protest in some way before or after those two minutes and we can debate then, but let us at least have those minutes of peace to honor and remember those who have truly sacrificed for our nation. Unfortunately, it’s too much to ask for this show to understand the perspective of most Americans.

I almost long for the days when she would just visit a family from Chalmette, Louisiana, to meet real-life Trump voters in their natural habitat. At least then she had a semblance of consideration for reaching out to the other side. This season, it just seems to be fear-mongering, lecturing, and promoting progressive beliefs non-stop. I can’t see anyone even right of Sen. Elizabeth Warren enjoying this nor do I think Silverman cares. Congratulations, Sarah Silverman, you’ve now reached Samantha Bee-levels of awful.