Sarah Silverman’s 'I Love You, America' Ruins Unity With Nudity 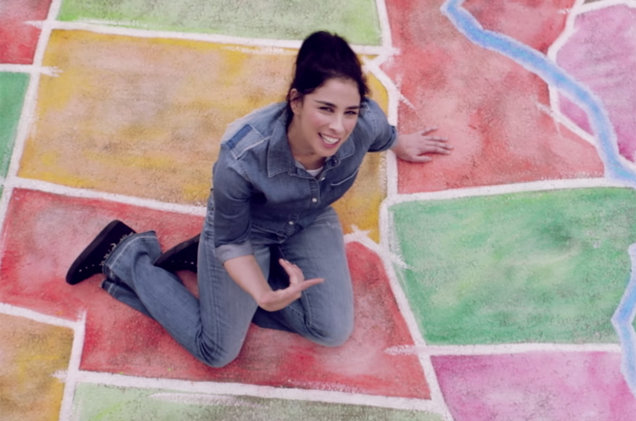 Sarah Silverman’s I Love You, America series on Hulu sounds like one of the biggest oxymorons available for streaming right now. What really hypes up the irony is the idea of Sarah Silverman, of all people, trying to “bridge the divide” between people across the country. So does the show succeed? Well, it honestly depends how tolerant you are.

The October 12th episode began with the song that was previously seen in the trailer focusing on how much she loves America and her miserable white privilege. Right off the bat, she openly admits to condescending Americans but only because of the people who vote against her best interests—I mean, "our" best interests. So far, there’s nothing on the show that I couldn’t get for cheaper and with half the attitude on her Twitter feed.

Then we come to something I am most certainly thankful for not seeing on Twitter. Upon the first scene with the studio audience, Sarah introduces us to two fully nude audience members. By fully nude, I mean showing parts that would make The Deuce blush. Thanks to Hulu’s more lax standards, Sarah boasts how she can break taboos by showing a man’s penis and a woman’s vagina. She repeatedly has the camera zoom in on their private parts…without wondering if there was anyone who wanted to see this man’s penis or this woman’s vagina up close. At this rate, the only groups that will unite are people giving up on television as a whole.

If you're still managing not to cancel your Hulu subscription after that, we finally reach the point of her show which includes reaching out to the other side of the aisle politically. "Do I deserve an award?" she asks, "Probably." For what it's worth, Sarah Silverman visits an actual Trump-voting Southern-based family located in Chalmette, Louisiana (which incidentally is where this writer was born) and calmly talks to them about their beliefs. After all, the fact that a gun-toting, flyover country-living, Trump-voting family could be (gasp) friendly must be an original concept to a liberal like Silverman.

Unfortunately, that doesn't stop the naturally condescending tone of the show as they hammer in on the family's "unusual qualities" such as teaching their seven-year-old son how to shoot, keeping nutria rats for pets, and - strangest of all - willingly voting for Trump for "change." All of this is peppered with staged audience laughter over remarks such as one family member saying about the birther rumors of Barack Obama, "I don't know where he's from." Classy. Once we're done seeing the far right family in their natural habitat like animals in a zoo, Sarah then gets to go home feeling all good about herself that she lowered herself to an average citizen's standard for a day. After all, basic decency and tolerance can be a shock to some people.

Sarah, if this new show taught me anything, it’s that you are capable of constructing about twenty minutes of being a somewhat tolerant (if not incredibly awkward) human being towards people who disagree with you. This shouldn’t be worthy of congratulations, but in today’s political climate I guess it is now. Of course, people outside the liberal bubble tend to already know that lesson, but I’ll gladly be willing to accept your run-of-the-mill talk show for you to understand that.

However, no average conservative is going to come even close to that conclusion if they have to wade through white privilege nonsense and nude audience members to get it. If anything, this first episode just feels like a one step forward, two steps back kind of program. That only makes me sour about the pilot and bitter about this show continuing.

Maybe if you just try a little harder, Sarah Silverman. You have a sliver of the point. Keep using that. I’m sure you’ll learn something.