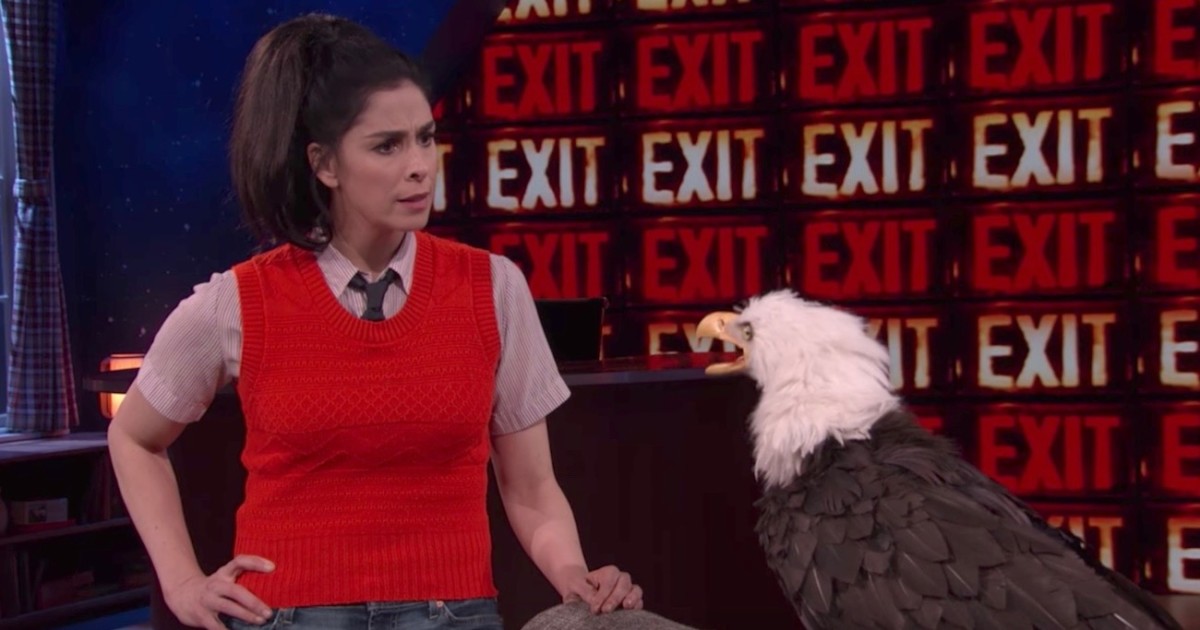 After the fifth episode of Hulu’s I Love You, America with Sarah Silverman, I now have to accept that the humor must either be liberally biased or vulgar. Often both. She reached new heights of vulgarity last week (outside of gratuitous nudity, of course) and this week she doubles down on the anti-Trump rhetoric in “honor” of the one-year anniversary of the election.

The November 9 episode begins like all the episodes do with a monologue by Sarah Silverman to her audience. When an episode begins with this line, you know we’re in for a painful half-hour.

The monologue only goes downhill from there as Sarah once again rambles about the “overwhelming survival-based fear” she felt from the November 9, 2016 election. She jokes that it was the first time she felt a kinship to the “far-right militia person” who “thought Obama might end the world” and the rapid desire to buy a gun. Furthermore, she remarks on Trump’s campaign being run by fear which leads to divisiveness and bemoans how “facts really don’t change people” set in their beliefs, like those who believe climate change is a hoax or that Barack Obama was born in Kenya. The only thing funny about these stale jokes is how far we've gone from the show's original “bridge the divide” premise within only 5 episodes.

Clearly, the one-year anniversary of the election weighs heavily in Sarah’s mind, because the entire episode seems to revolve around it in some way. Following the monologue, we’re treated to a matchup between comedian Gil Ozeri and a doomsday prepper. It’s innocent enough, but we all know it’s headed for a nuclear war doomsday bunker punchline at the end of the episode. Get it? Because even though Donald Trump has been elected president for over a year now, we’re still at DefCon 1 in the United States.

In the final stretch, Sarah speaks to Father Gregory Boyle about his initiative known as Homeboy Industries, a program to help rehabilitate gang members and reintegrate them into society through kindness and patience. It’s an inspiring idea that brings hope to the streets of Los Angeles, but Sarah had to go and ruin it by joking about Donald Trump and even bemoaning the level of gun violence in the country. Sadly, the Reverend goes along with her game, calling Trump “hard-headed” and asking elected officials to listen to “what people really long for” in more background checks and gun restrictions. Of all people, a man who works with former gang members should know that they didn't get their guns by passing background checks and following regulations.

Sarah closes the conversation suggesting starting a Homeboy Bakery at “NRA corporate offices” to “make them feel loved and included” since it’s clearly their fault for gun violence. I'm sure the gang bangers responsible for the majority of shootings in LA are all card-carrying NRA members. Never mind that the recent church shooting in Sutherland Springs, Texas, was ended by a former NRA instructor, her solution to confront hatred is apparently riling it up before it even exists.

There’s one last statement about having hope in spite of the “hate and division” present in Trump’s campaign, and we’re all left wondering, didn’t she visit Trump voters in the first two episodes? I wonder what the other 60 million voters must think of being told their vote was a part of hate and division.

I have to admit that I did have some sense of enjoyment from this episode, though. It wasn’t from anything Sarah Silverman said, exactly, but the fact that Donald Trump defeating Hillary Clinton in the biggest establishment upset in history one year ago still bothers leftists like Sarah Silverman gives me great joy even now. Happy election anniversary, everyone!