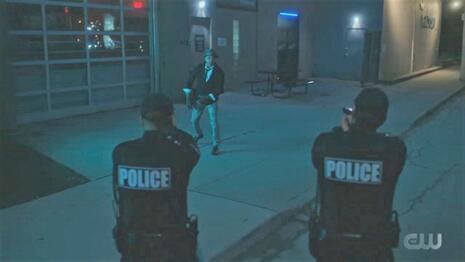 Taking a page out of today’s headlines, the CW’s Coroner aired an episode on September 9 titled “Confetti Heart” that focused on a white cop shooting and killing an unarmed black man. To hear the protesters in the Black Lives Matter movement, this sort of thing happens every day in America. This show, however, is set in Canada so at least the viewer is spared that line of propaganda.

The show begins with a scene meant to show how prevalent racial bias is in policing. A white female police officer pulls over a black man for a traffic violation – he didn’t come to a complete stop, she said. The man, however, is Detective Donovan McAvoy (Roger Cross), who is on his way to a court inquest on a coroner’s report. When he shows his identification she realizes her mistake and apologizes. As she sends him on his way, he demands she write him a ticket since she claimed he broke the law.

Cop: Morning. Do you know why I stopped you here today?
Donovan: I'm sure I don't.
Cop: You failed to come to a complete stop in the allotted zone just back before the intersection at Avenue and Wilson.
Donovan: And which intersection was that? I noticed you following me through a few.
Cop: Pardon me, sir? Have you been drinking?
Donovan: It's 9:00 am.
Cop: Why don't you go ahead and get your licence and registration for me. My apologies, Sir. I... I didn't realize you were on the job.
Donovan: I am. And now I'm late for court.
Cop: Ah, geez, well, let's just get you on your way. You have a good day. Again, my apologies, sir.
Donovan: Whoa, whoa, whoa! Where you going? I thought you said I rolled a red back there? How about you do your job? If I did in fact break the law, as you claim, I expect you to write me a ticket. - Let's go! Hurry up, I'm late. 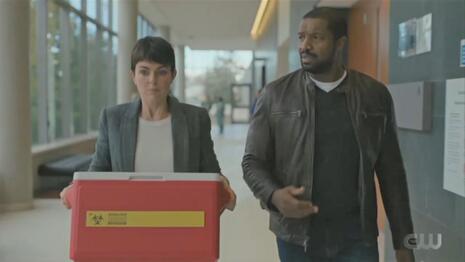 The inquest Donovan is late to is about a black musician named Kofi Abanda who was shot by Toronto police outside a music recording studio one night. The report given to the coroner states that Kofi was on amphetamines at the time of his death, which gives the police the story that Kofi was reacting badly due to "excited delirium," or agitated, aggressive behavior by a drug user.

When Jenny Cooper (Serinda Swan), the coroner, is doing the court inquiry into the death, she sees that the evidence doesn’t add up. During an investigation she discovers that Kofi was on anti-depressants, not amphetamines, and that he wasn’t aggressive toward the cops. She puts the story together further and determines that Kofi was tased after he was shot. Taser “confetti” is found in Kofi’s heart, upon her examination of it and that confirms her conclusion.

It turns out, the police covered the real story up. It was dark outside when the cops questioned Kofi, who was playing his trumpet outside the studio’s entrance. He received permission to put away his trumpet but when he went to open the case, a metal mouthpiece shone in the darkness. One cop overreacted when he saw it and shot Kofi. Kofi was dead when the cop realized he made a bad shoot. To cover it up, he tased Kofi to have the excuse that Kofi resisted and that's why he had to shoot him.

It is also brought out that the cop that shot Kofi has a record of bad behavior. This gives Jenny the opportunity to make a pitch for more training for cops in de-escalating tense situations.

The cops are shown as bad people all the way through the episode. Two cops go to Donovan’s house to harass him after he discovers a third cop’s involvement in the cover-up and pays him a visit to get him to testify in court about that night. And Donovan visits the cop who shot Kofi to get him to come clean in court but he refuses to do so, saying, “Blue covers blue.”

The entire judicial system is condemned when Kofi's sister tells Jenny, "The only bias in this court is the systemic targeting of Black and Indigenous people." The coroner assents, "I don't disagree."

This may not be surprising to hear in the U.S. in September of 2020, but this episode originally aired in Canada in February 2019, proving just how seeped in BLM propaganda the entertainment industry has been since 2013 when the movement began. While various think pieces over the summer called for cop shows to be canceled in the wake of George Floyd's death, what nobody seemed to notice is how often false Black Lives Matter narratives are already pushed on TV.

In the 5 years MRC Culture's On TV Blog has been monitoring scripted television, we have covered numerous examples of storylines just like this involving corrupt cops covering up the killing of unarmed black suspects, including: ABC’s How to Get Away with Murder, ABC’s Scandal, Fox’s The Gifted, Fox’s Shots Fired (several times), Freeform’s Cloak and Dagger, NBC’s Blindspot, NBC’s Law & Order: SVU, Netflix’s Seven Seconds, and Showtime’s The Chi. Expect to see many more when the fall TV season finally begins.