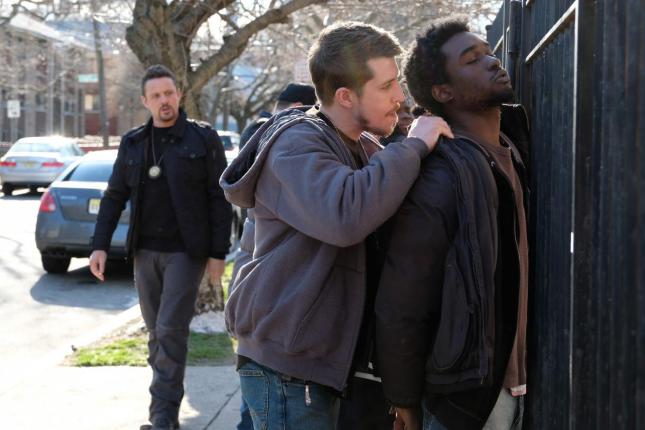 Netflix’s Seven Seconds can be summed up by a drunken slur uttered during its fifth episode: “You’re all racist assholes. Every one of you cops.” And when it comes to this show, that statement is correct. Seven Seconds, released February 23, portrays police officers and the justice system as incredibly racist and apathetic.

The show revolves around the hit-and-run death of Brenton Butler, a 15-year-old black kid, at the hands of police officer Peter Jablonski (Beau Knapp) and three other white police officers in New Jersey. Although the collision is an accident, the police officers decide to flee the scene, believing the boy to be dead. Brenton is found alive 12 hours later and taken to the hospital, where he eventually dies. An investigation and trial ensue, to the dismay of all the police officers.

When Detective Fish (Michael Mosley) and Assistant Prosecutor KJ (Clare-Hope Ashitey) finally realize the police were involved and start investigating them, the police force harasses them. During the investigation, all the police officers refuse to answer any questions, and the police captain rebukes them for “locking up other cops now.”

The lawyer defending the officers, Sam Hennessy, explains to her four clients that their case must be tried together because, “Together you’re cops. Together, they have to put the whole police force on trial. And no jury ever convicts the entire police force.” To the press, Hennessy calls the case a “witch hunt” against the Jersey City Police Department and blames “political correctness run amok.”

Hennessy trivializes the case by turning it into a race problem, when in reality the problem is that four police officers left a 15-year-old boy alone in the snow to die. But she explains herself in episode eight, “Bailed Out:” “Welcome to the criminal justice system, gentlemen. No one gives a fuck about the truth.”

Assistant Prosecutor KJ also turns the case into a race issue by adding a hate crime charge to the aggravated manslaughter charge in order to increase the number of years the officers could spend in jail. In court, when KJ calls for the 20-year maximum sentence for aggravated manslaughter, the police officers attending the trial stand up and storm out of the courtroom. In the end, when the officers are found not guilty on the charge of a hate crime, KJ laments that justice is blind.

Additionally, in usual liberal TV fashion, it’s not just the bad guys who are the racists—everyone’s a racist.

Despite the fact that the 15-year-old boy was left for dead after being hit by a car, Detective Fish repeatedly makes insensitive comments speculating about Brenton’s possible gang affiliations as if that's some justification. In the third episode, “Matters of Life and Death,” while at Brenton’s funeral, Fish remarks, “Family had to have seen this coming. I’m telling you, it’s the penitentiary or the cemetery.”

In the second episode, “Brenton’s Breath,” before they figure out that cops are involved in the death, KJ inquires into some irregularities in Brenton’s case, to which Fish responds, “Why do you even care? The kid was a banger.” This is said about a 15-year-old kid who died while riding his bike in the park.

The sixth episode, “Until It Do,” has Prosecutor Connelly (Jeremy Davidson) become angry when it’s discovered that Brenton had a single criminal charge on his record due to being caught with a few joints. Connelly angrily remarks about the dead 15-year-old, “Now we’re a protecting a common thug. A dime a dozen drug dealer.” Spoiler: Brenton was neither in a gang nor a drug dealer.

In the same episode, Brenton’s mother discovers who is her son’s killer. When she goes to Jablonski’s house to confront him, his wife exclaims, “Why can’t someone lock her up? I bet she’s got a record.”

The over-the-top racism on the part of the white characters obscures any message the show is trying to convey. But it’s not hard to tell the show has no interest in representing reality. In the second episode, an altercation between the four cops and a few black youths has one of them raise his hands up and assert, “Hands up, don’t shoot,” a phrase that was attributed to Michael Brown and has long been debunked. 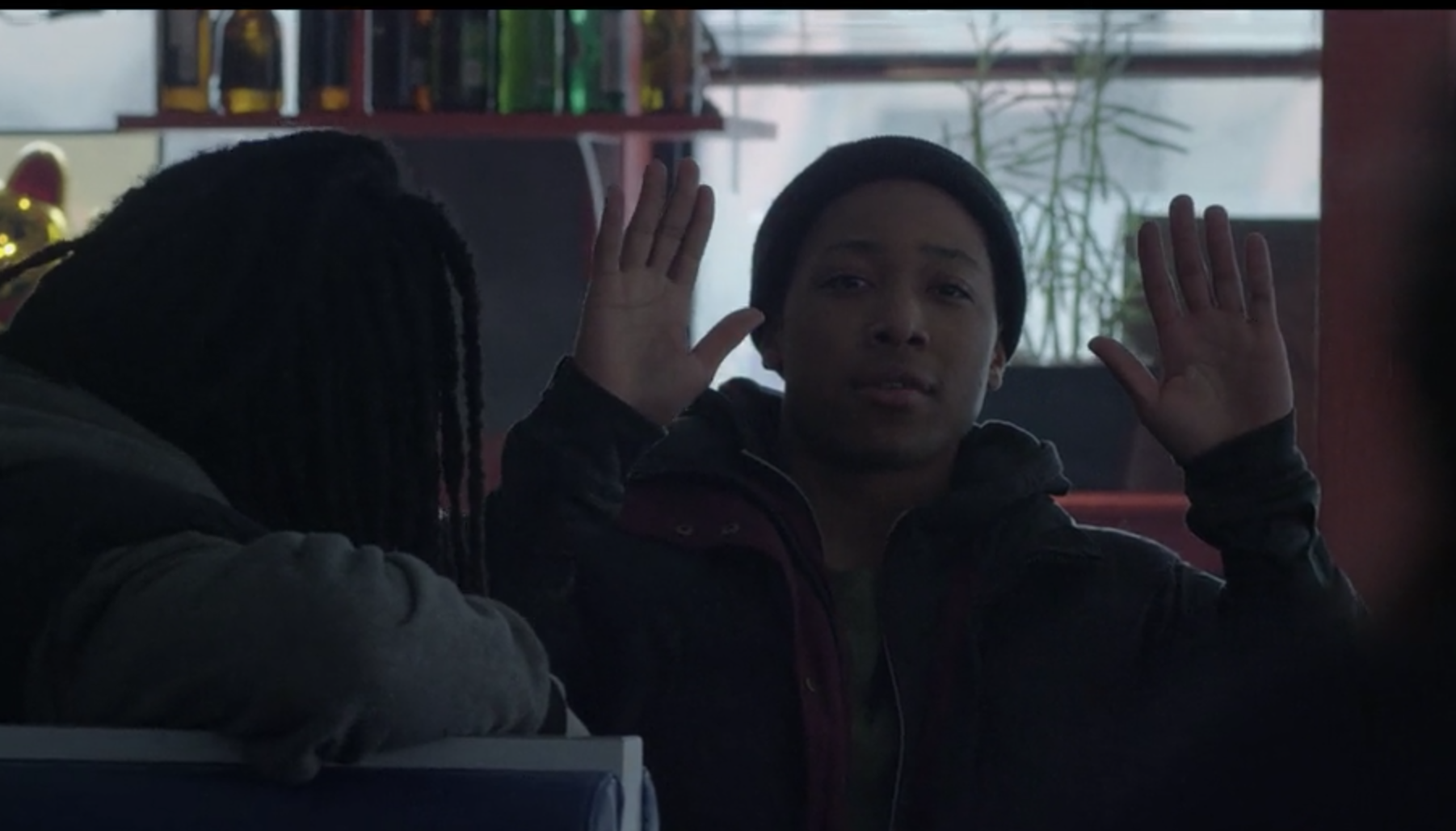 But speaking of absurdities, the biggest one is that the cops decide to cover up a car accident that clearly was an accident. As rationale for fleeing the scene, sleazy narcotics officer Mike DiAngelo (David Lyons) explains to Jablonski, “A white cop and a black kid? Don’t you watch the news? There are no fucking accidents anymore, and you know it.” He continues that the incident will turn into another Ferguson or Baltimore.

Protests begin anyway, obviously, once people learn that the police officers left Brenton to die and then tried to cover it up. Black people take to the streets chanting, “Stop killing us” and “Black lives matter,” burning American flags, and holding signs that say “Am I next?” and “White silence is violence.”

In the third episode, after learning that his son’s killer is still unknown, Brenton’s father, Isaiah (Russell Hornsby), goes to the police station to speak with the detective. While there, an unnecessary altercation takes place when the officer puts his hands on Isaiah, and then handcuffs him although Isaiah doesn’t fight back. Isaiah is released shortly with a bruise on his face, and soon discovers he lost his job due to the arrest.

Finally, when the trial is over and Jablonski is sentenced to only one year in prison instead of five, Brenton’s half of the courtroom refuses to stand when the bailiff says, “All rise.”

As if the race baiting of the show wasn’t enough, in episode four, “That What Follows,” KJ explains the meaning behind the name her father gave her: “He said the world would take me on my merits if they thought I was a man. So I put ‘KJ’ on my college applications and every job application and I think he was right. I think it opened a lot of doors that otherwise would have stayed closed…it’s reality.” In what world is that reality? Anyone who has ever applied to college or any type of graduate school or job knows that affirmative action benefits females, not males.

Additionally, one of the police officer’s girlfriends gets angry with him and announces she’s going to abort their child. She turns to Jablonski and says, “We’re the same” because they both “kill kids.”

But there is hope. Throughout the ten episodes, there was a strong Christian presence. Brenton's parents constantly pray and thank God. When Brenton’s mother goes missing, Isaiah goes to his Church group for help, where they proclaim, “Let’s put our faith in practice,” before setting out to search for her.

Last year, FOX’s Shots Fired also tried to address American racial tensions by villainizing police officers and portraying everyone as racist. But shows like these have more of a negative effect than a positive effect on America’s racial divide.