Wednesday night's episode of Fox's Shots Fired, "Hour 9: Come to Jesus," continued to build on its storyline in which wealthy white donors are furnished with guns and tasers – as part of the "Tours" program—and take part in ride-alongs with racist police in the fictional town of Gate Station, North Carolina.

To recap, a wealthy white donor executed black teenager Joey Campbell while he was helpless, on the ground, and crying for his mother. What else would you expect from a wealthy white man armed with a gun? In tonight's episode, we learn that the wealthy white donor – who also happens to be building a private prison (classic!) – thought he was taking out his taser, intending only to stun the boy. Instead, he slaughters the poor youth. The story is taken from an actual case in Oklahoma, where an actual volunteer deputy mistook his gun for a taser and shot and killed an unarmed black man.

But in the racist world of Shots Fired, white police step in to do what they do best. They cover up the murder and immediately go about framing Pastor Janae, one of the series’ recurring characters, who happens to be a black female. Pastor Janae, you may remember, is of the belief that police were invented to “control” black people.

Arlen Cox: That night, I assisted Lieutenant Breeland and Sergeant Derkin when they pulled over Joey Campbell for questioning. When Joey resisted and refused to cooperate with the officers, I reached out for my department-issued taser and accidentally pulled my gun. I'm ashamed. I have to live with the fact that... a simple mistake took the life of a promising young man. Had Lieutenant Breeland not intimidated me, I believe that I would have come forward sooner. But as an officer sworn to uphold the law, he did in fact intimidate me and he should have reported the accident to his superiors. He allowed for Pastor Janae Jones, an innocent woman, to be wrongfully detained. I can only assume that he had something to do with finding my gun in her church. I'm going to turn myself in to Sheriff Platt. Immediately.

Meanwhile, white officer and recurring character Lieutenant Breeland is properly contrite and ready to divulge information on the misguided Tours program. He offers to blow the whistle and confess to DOJ Investigator Ashe Akino (Sanaa Lathan) and Special Prosecutor Preston Terry (Stephen James) in exchange for immunity. But Akino, acting like no DOJ investigator in the history of DOJ investigators, refuses to hear his confession because she can't stomach the idea of letting off anyone connected with the Tours program. After all, if she lets Breeland off, he'll just transfer to another department and other black kids will die. At this point, it appears that the only thing to do to make society safe is to round up all the white people. 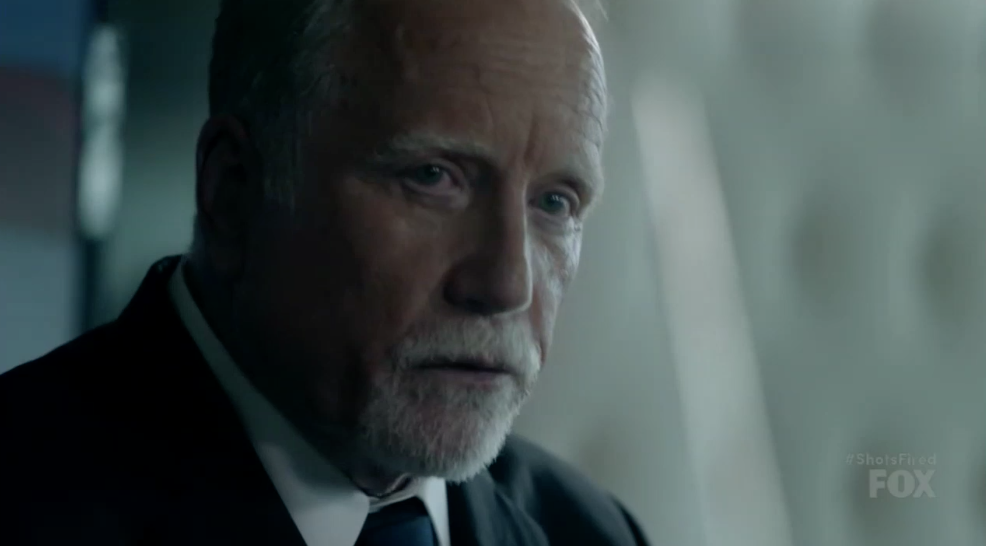 If viewers can stick with the rest of the story without throwing up, they'll be rewarded with heart-searing drama when Deputy Beck – conflicted black officer – decides that he can no longer defend the racist police force. He's done "bleeding blue."

That the show has been canceled is a mercy to us all and suggests that there is hope for humanity. That the network has decided to air the last episode will be met with delight by those who enjoy the show for its unintended comedic appeal.