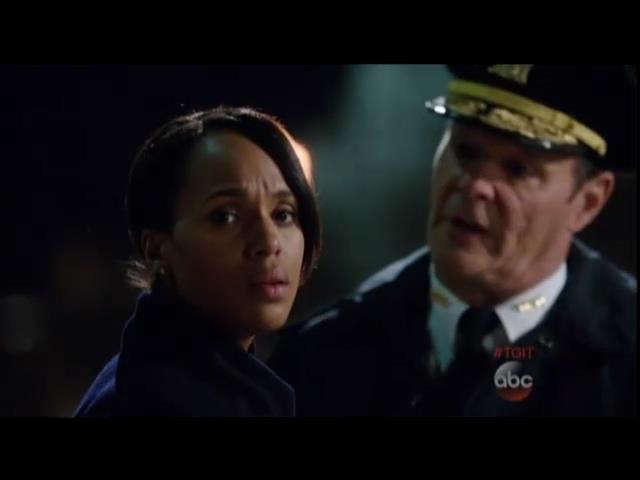 A white police officer shoots and kills an unarmed black teen who fit the description of an earlier cell phone shoplifting incident. The African-American community responds in outrage and protests while the boy’s body lies on the ground for hours. The cop insists it was self-defense. Sound familiar? This was the plot on last night’s episode of Scandal where a real-life murder case was turned into a liberal fantasy.

In the episode, of course, outcomes don’t turn out the same as real life. In the Ferguson case, white police officer Darren Wilson was found to be innocent and acting in self-defense; autopsy reports confirmed Michael Brown did not have his hands up in the air, in surrender pose, but was actually charging at Officer Wilson.

But that didn’t fit the liberal narrative, of an innocent black teen murdered in cold blood by a racist police officer. So Scandal changed the outcome to better suit an imaginary version of what happened.

In the March 5 episode, Brandon Parker, a 17-year-old African-American teen is confronted by white police Officer Newton, after Newton receives a call about a cell phone shoplifting incident in which Parker fits the suspect’s description. When Newton thinks Parker is reaching for a knife, he shoots Parker in self-defense.

In the end, viewers find out that Parker was in fact unarmed. Officer Newton reveals, in a frustrated, racist rant, that he planted the knife there because he felt “disrespected” by “you people,” referring to the black female protagonist Olivia Pope. Not only that, but Parker wasn’t the cell phone shoplifter in question; he was reaching into his pocket to pull out a sales receipt for the phone.

The episode ends with Olivia comforting Parker’s father saying justice had been served, “The office who shot your son, is behind bars.”

No surprise, the media loved the race-baiting in the episode but thought it unrealistic that the police officer was arrested. This kind of justice would just not happen in America, in the liberal media’s mindset.  Paste Magazine wanted the episode to go further:

“Show the cops attacking protestors, show the terrifying truth—that Officer Newton would not have ever, in a million years been arrested.”

But no one tear-gassed the peaceful protestors. Marcus is able to stop police from turning their guns on him simply by announcing that he's filming them (we know by now that filming police doesn't necessarily stop violence). And it all wraps up in the speedy arrest of the officer who shot Brandon, with an apology from the president as an added bonus.

Are there people who will watch the white cop's racist tirade and, because it went unquestioned by any of Scandal's characters, determine that his actions were partially warranted? Will some people assume that the bad cops always go to jail, and that justice is always served? Will people turn off the TV and pretend everything's OK?

Social justice was clearly the theme of the episode. Mid-episode, star Kerry Washington delivers this line, which was tweeted out many times:

"You talk about fairness and justice like it's available to everyone, it's not." #Scandal

Washington and show creator Shonda Rhimes, both hard-core Obama supporting liberals, retweeted a fan who said “it would be awesome if this was real life.”

It would be awesome if this was real life. #Scandal

So apparently “it would be awesome” if every time a white police officer shoots a black person, the officer was found to be corrupt racist?

The media are famous for ignoring reality and trying to promote a fictional version of events to promote a liberal agenda. We saw the news do it with Ferguson, where the networks reported a false detail of the case a whopping 140 times and never corrected themselves, even after the government declared it untrue.