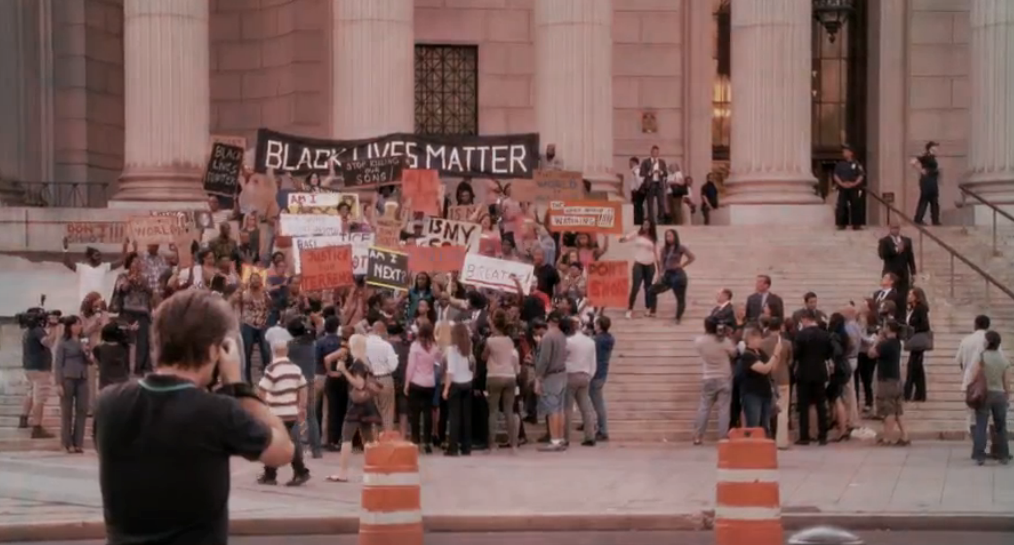 Law and Order: SVU is known for its unrepentant liberalism. The show also prides itself on pulling plots directly from the headlines, especially if the show’s producers think they can use the storyline to push a left-wing narrative. The show has called right-wing talkers like Rush Limbaugh “a cancer spreading ignorance and hate,” portrayed Hollywood conservatives as murderous, closeted perverts, and revealed one of its top medical examiners to be a serial killer, among other offenses.

Tonight’s episode, titled “Community Policing,” continued the show’s established tradition, diving headlong into the #BlackLivesMatter controversy, depicting New York City Police officers shooting an “unarmed black college student who happens to match the description of the suspect” in the investigation of the brutal rape of a 12-year-old and her mother.

Paying homage to Ferguson’s false “hands up, don’t shoot” narrative, the episode includes cell phone footage of cornered suspect Terrence Reynolds raising his hands in the air and trying to surrender as he’s shot by the police. When Reynold’s father is asked why his son ran, he recounts how poor black men are regularly “arrested for no reason” and can lose their jobs while they wait to make bail. Protesters quickly assert Reynolds was shot for “running while black.”

Barba: I said no interruptions.

Secretary: I know, but--

Henderson: Thank you for coming today. I'd like to warn you that what you are about to see is as graphic as it is tragic. We've obtained cell phone footage of Terrence Reynolds running for his life from the police. A resident of the building across the way took it from his window. Here we see Terrence desperately trying to open a locked door while reaching for his keys.

Donlan: Hands where I can see 'em!

Henderson: He attempts to put his hands up, turning towards the officer to comply with his commands. The officers begin firing their weapons. Here it is in slow motion. Watch closely. He keeps trying to put his hands up even after his body hits the ground, but the officers just continue to fire until the ninth and final bullet pierces his body.

Later, a black reverend representing the deceased victim's family claims nearly 700 people have been shot and killed by police this year and that the city needs to send a message with this case.

Scott: I know you're tired of this Kabuki, Rafael, and so am I. This year alone, almost 700 people have been shot and killed by the police. Now, that won't stop until cities start to send a message. I-I can't imagine the pressure that you're under. Please, do the right thing here.

While the number isn’t technically untrue, the audience is led to believe 700 unarmed, black men have been shot to death by police.

The statistic comes from a Washington Post database of police shootings, but of the 770 police shooting deaths investigated by the Post, 612 of those who were killed were later confirmed to be armed with a deadly weapon, 40 were using their vehicle as a weapon, and a further 26 were armed with a toy weapon. Just 74 of the people killed by police in cases the Post has tracked were later found to be unarmed, less than 10% of the total. Of those, 27, or 3.5% of the total, were unarmed, black men.

Even if we assumed the worst in all 27 cases—a faulty assumption given even a cursory examination of the evidence—that’s a much smaller number than the inflated “nearly 700” figure given in the episode.

In the aftermath of the release of the "smoking gun" video, Assistant District Attorney Rafael Barba (Raul Esparza), under pressure from City Hall to secure an indictment, paints the officers as trigger happy, forcing one of the shooters to admit that if he and his fellow officers had waited just a half second longer, Terrence Reynolds would still be alive.

Barba: Is it possible you had second thoughts? Do you think you should have waited to determine whether Terrence Reynolds was, in fact, armed, was, in fact, an actual threat?

Dumas: I don't know. He was turning.

Barba: He was turning but you didn't see a gun, and that's why you stopped firing. Isn't it, Detective?

Barba: If you and your fellow officers had waited half a second longer, Terrence Reynolds would be alive today. Would you agree with that?

In the episode’s final moments, SVU’s writers pull ever so slightly back from full-on entanglement with #BlackLivesMatter protesters. The grand jury wants to bring stronger charges of murder, but the ADA walks them back, and they ultimately settle on manslaughter for two of the shooters, and negligence for the third.

“Community Policing” also calls out anti-police violence, concluding with a chilling scene where the audience learns a police officer has been shot in the face during a “traffic stop gone wrong.” Just two months ago, a Texas deputy was shot “execution style” while filling his patrol car at a gas station. Last December, two NYPD officers were murdered in their parked patrol car in an ambush attack.

The episode ends abruptly, never directly addressing the motive for killing the officer, and leaving the audience to wonder whether or not the officers who shot Terrence Reynold’s will be convicted.

Although the episode presents sympathetic police characters and paints an impossible decision--they were chasing a violent child rapist, and had been told the suspect was armed and dangerous--the facts of the case ultimately bolster #BlackLivesMatter's talking points about trigger-happy police who could avoid tragedy by simply waiting just a little longer before taking action.