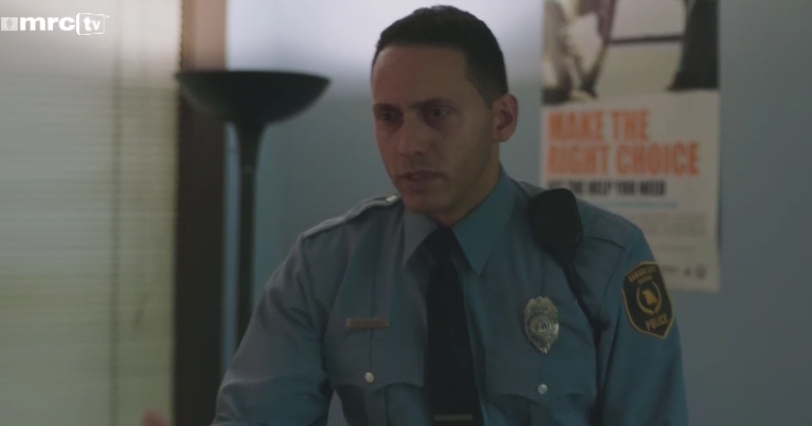 Detective Armando Cruz (Armando Riesco) is known by fellow Detective Alice Toussaint (Crystal Ann Dickinson) as having a “bleeding heart for black men,” and in May 26’s episode of Showtime's The Chi, “Blind Eye,” viewers gain a glimpse as to why.

The episode opens with a flashback to 2013 in Kansas City with a black man, dead in the front seat of his car, having been shot by Officer Moreno (Elliot Villar), who thought the man had been reaching for his gun. Only there’s no gun, no matter how hard Cruz, then an officer and Moreno’s partner, looks.

Officer Moreno is initially quite rattled in the aftermath of the shooting, as he commits to the idea he saw the victim reach for something. More telling, however, is Moreno reminding Cruz in Spanish that in both being Hispanic, they are “brown brothers in blue,” in addition to being partners:

Moreno: So, what are they saying?

Cruz: The lieutenant is on his way back. He wants us to talk this through.

Moreno: This is some fucked up shit, man. Damn. His tags were expired. I made these stops, what, a thousand times? I was just gonna give him a warning, you know? Look, I panicked. It was an honest mistake. I thought he--I just-- I just thought I saw a gun. Didn't you think that too? He fucking reached for something. I know I'm not crazy.

Cruz: Seatbelt. He reached for his seatbelt. It was still around his chest.

Moreno: *Speaking Spanish* You remember that?

Cruz: Yeah, I want us both to go home to our families too. But...

Moreno: We're partners, Armando. We started at the academy together. If this situation was reversed, there's no question what I'd do. Look, two things you're always gonna find on these fucking--*speaking Spanish* weed and guns, and they'll blow our brains out the second we get caught slipping.

Moreno: It's me now. I'd rather be judged by 12 than carried by six. Right?

Moreno becomes more sure of himself once an incident report has been filed, which Cruz has been asked to sign. That it appears to be far from what actually happened leads to a confrontation between the officers. Race comes into play, and George Zimmerman’s name is evoked, as someone who is “brown on the outside, white on the inside.”

Cruz: We need to talk. Now. We can do it out here, but for your sake, I suggest we do it privately.

Moreno: Let me talk to my partner and I'll catch up with you guys later.

Cruz: That's what you told the Lieutenant? The guy lunged at you? Made threatening gestures? You feared for your safety? Are you fucking kidding me?

Moreno: You need to calm down.

Cruz: What threatening gestures did you see him make?

Moreno: Look, it's a shit storm now. It's out of my hands. The big wigs have taken over. They sat me down with the department's media officer. My union rep told me my address was leaked to the press, that my family's in danger. They even updated the department's web site to include my affiliation with the Puerto Rican Officers Association.

Cruz: What the hell does that have to do with any of this?

Moreno: It's harder to accuse a person of color of bias for shooting another person of color. Look, that's what they told me. They've taken over, and I'm letting them.

Cruz: It's the coconut shit, right? Brown on the outside, white on the inside? It's the George Zimmerman strategy? Don't be this kind of cop, man.

Moreno: No, don't you be this kind of cop. Now sign the fucking report.

Such is not the only strongly-worded prodding Cruz receives, though. He comes across a bullet in his mailbox, a piece of paper attached reading “Nigger lover.” Ultimately, Cruz stands by his partner’s statements at a press conference, concluding his statement by saying, “Hermanos marrones en azul,” which translates to “brown brothers in blue.”

Officer Moreno is not the only co-worker of Cruz’s to have shot a black man under questionable circumstances. Back in present day, before telling Cruz he has a “bleeding heart for black men” and wanting to know if “they all get a ‘get out of jail’ pass,” Toussaint, who herself is black, reveals she had received a thirty day suspension for shooting a gangleader.

If the reference to George Zimmerman isn’t enough for viewers, there’s also concerns about “another Ferguson,” as Toussaint is given a talking to by her sergeant for dealing harshly with suspects. “Think whatever you want about these boys out here gangbanging,” she’s reminded, “but they're still somebody's child.”

Perhaps Cruz will have better luck doing what he believes is the right thing in his subsequent cases. His role in the episode concludes with calling Brandon (Jason Mitchell), who Toussaint believes to have mob connections now, likely to warn him of an investigation.