Two police officers gunned down in Brooklyn were the focus of last night’s episode of Blindspot, “Persecute Envoys.” If the plot sounds familiar, it should. In December 2014, two uniformed NYPD officers were assassinated in Brooklyn while they sat in their marked patrol car. The officers “were shot point-blank in the head by [a] lone gunman” without any warning as retaliation for the deaths of Eric Garner and Michael Brown.

All the evidence points to a nearly identical scenario in Blindspot. The FBI agents think the officers were killed in retaliation for the police shooting death of an unarmed black teenager that was caught on camera and caused Black Lives Matter-style riots the previous year.

Patterson: Two NYPD officers were shot earlier this morning, execution style. Officers Jake Schultz and Sam Garrigan. I'm sure some of you remember last fall a Brooklyn cop shot an unarmed black teenager, Lamond Green, in a supermarket parking lot. Schultz and Garrigan were two of the five other officers that were on the scene.

Reed: That video was everywhere. John Becker, the guy who shot Green, wasn't even indicted. The protests almost shut Brooklyn down.

Jane: He just got away with it?

Reed: There's been a lot of that going around.

Zapata: Becker got fired and the six-five has been doing a lot to clean up house since then.

Reed: That's great, it's a shame it takes a riot.

Mayfair: Schultz and Garrigan were at the scene. Guilty by association. Maybe these are payback killings.

Weller: Before we jump to conclusions, shouldn't we consider the possibility that this is unrelated?

Patterson: I don't think it is.

Jane: Is this connected to one of my tattoos?

Patterson: Lamond Green was the last in a long line of questionable incidents from the 65th precinct. I didn't know this until this morning but the community has a nickname for them. The Brooklyn Butchers. And this was spray-painted on Schultz and Garrigan's patrol car.

Zapata: "Butcher the butchers." They're coming after the six-five. 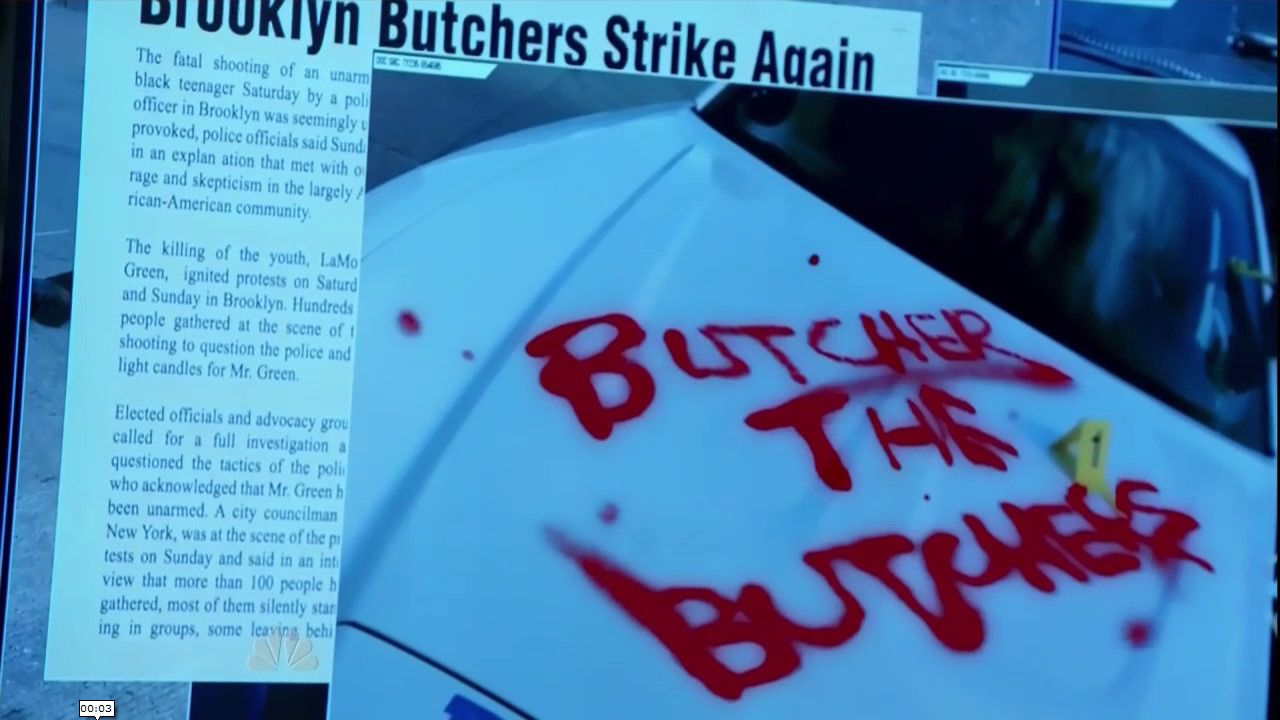 Jane: Wait, that-- that's on me. The butcher's knife tattoo.

Patterson: And here's the scary part. The 65th precinct is in the crosshairs.

Jane: How could the people who did this to me have predicted these cop killings?

Weller: I don't know. But if this is tattooed on you, the chances are these murders are just the start.

When Jane expresses surprise that the officer “just got away with it,” and Agent Reed snidely remarks, “There's been a lot of that going around,” you just know the writers won't allow Black Lives Matter to be the culprit. Soon the agents unravel a far more nefarious plot. The deaths of these two officers was an inside job meant to cover the tracks of a group of corrupt officers.

First, the audience learns that officers have been using body cam footage to blackmail high profile residents of the city. The FBI team quickly tracks down an NFL running back named Ricky Holt, suspected of committing the murders. As it turns out, the single, would-be perp was caught having sex with another man by the now-deceased Officer Schultz during a routine noise complaint. Now, the body cam footage is being used to extort him for tens of thousands of dollars every month. He’s been paying because, if anyone finds out about his sexuality, “I'll lose my endorsements. No team will want me.”

Reed: Ricky, you're a hell of a ballplayer. But right now, we got you on resisting arrest and assaulting a federal officer.

Weller: We can make that go away if you tell us everything you know about Officer Jake Schultz. What's your problem with him?

Holt: He's a dirty cop. That's my problem. He busted into this apartment I was at last month. My music was too loud or something like that, so my idiot neighbors called in a domestic dispute.

Weller: Your music, your neighbors. Sounds like your apartment.

Reed: Okay, so Schultz busts in, and?

Weller: A week later I get this anonymous letter, these pictures of me having sex that night. Saying I gotta pay 50-grand or they gonna send 'em to Deadspin or whatever.

Weller: Schultz was blackmailing you?

Reed: I don't get it, Ricky. You're not married. Was it a teammate's wife or something?

Weller: If you wanna play ball again, then you gotta start

Holt: It was a guy. All right?

Reed: You do realize there's out professional athletes these days, right?

Holt: Yeah. And look how their careers are going. Come on, man, I'll lose my endorsements. No team will want me. I do my lap on the morning talk show circuit, then what?

Weller: If you paid him off, why did you confront him?

Holt: It turns out, he wanted me to deposit 50-grand every month. I mean, the whole thing was messing me up, so I got in his face.

Unfortunately, far from solving his problems, Holt’s outburst cost Officer Schultz his life. Although the illicit footage had come from his body cam, Schultz wasn’t the one blackmailing Holt. But once he started poking around trying to uncover the truth, he became a loose end that needed to be dealt with.

The conspiracy to murder police officers and blame their deaths on protesters goes all the way to the top. The wheels fall off when the police captain inadvertently reveals he knows Holt is gay, a fact that hasn’t been released. Captain Rossi is in on the scam.

It wasn’t enough for Blindspot’s writers to shamelessly pander to anti-police sentiment. They had to go one step further and blame recent bouts of anti-police violence on the officers themselves. It’s just another step in the show’s persistent pattern of blaming all the world’s problems on divisions of American government. And I’m sure there is plenty more to come. NBC has already renewed the series for a second season.