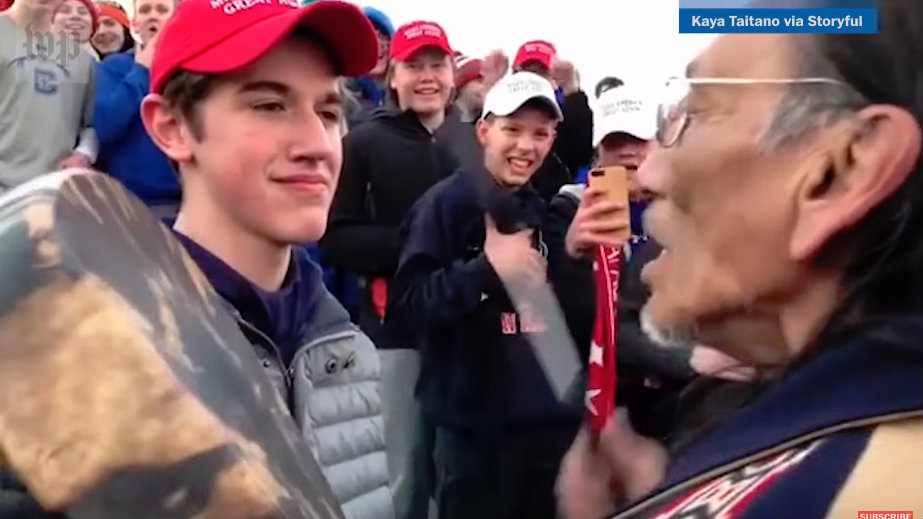 It used to be that journalists didn’t need fire safety seminars to know they could get burned publishing stories that lacked facts or context. But when the original, deceptively edited video of Nathan Phillips and the Covington kids emerged, the press swaddled itself in oily rags, grabbed a Zippo and went full “Johnny Human Torch.”

Given the mess their “reporting” left, it’s not easy to sift through the ashes and find the worst examples. Was it the initial rush to get the “smirking punk vs. noble indigenous elder” image out there, or was it the mumbled “more complex picture” sorry-not sorry updates? Was it their inability to forthrightly admit Phillips wasn’t Rambo with a sage stick and never set foot in Vietnam? Or was it their explanations as to why donning MAGA hats is an act of aggression and the kids therefore deserve what they got?

Here are eight of the worst instances of the media’s fake news war against the Covington Kids.

The Standoff at National Mall happened Friday afternoon Jan 19. CNN and MSNBC vied for the outraged social justice warrior demographic, spending a combined total of 53 minutes and 20 seconds harping on the disgusting confrontation that these kids initiated. About 29 minutes of this coverage came before new video surfaced showing a different story than was initially reported. Regardless of the new developments, only a tiny number of media journalists changed their tune from claiming that the “mob of MAGA hat-wearing high school students” are “clearly … not getting a good education,” “whose parents are failures,” and — according to The Daily Beast’s Sam Stein on MSNBC — are part of a “new cycle” of hate crimes in line with the “marching of Neo-Nazis in Charlottesville, Virginia.”

It took longer than 24 hours for only a handful of reporters to admit they misjudged the situation. 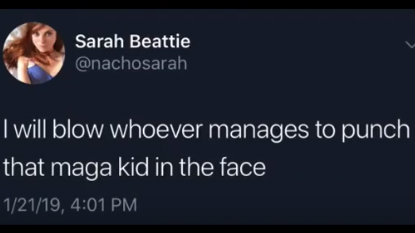 The Twitter Left was apoplectic that kids in MAGA hats showed anything but deference towards Nathan Phillips and his drum. They screeched for justice. One small-time Hollywood actress Sarah Beattie encapsulated the vitriol by demanding physical harm for the “smirking kid” Nicolas Sandmann, and in the fashion of a true liberated woman, tweeted that she’d offer to “blow whoever manages to punch that MAGA kid in the face.” And of course Twitter — with all its draconian safe-speech policies — wouldn’t take down nor flag many of the other vicious tweets calling for the blood of these “racist” kids.

Monday’s NBC Nightly News pointed another loaded fake news gun at the heads of the Covington Kids and invited the nation’s viewers to pull the trigger. Correspondent Ron Allen reported, “This face-to-face confrontation igniting charges of racism. Kentucky high school students accused of mocking Native American elder Nathan Phillips, who claims his drumming was a gesture of peace.” And on top of sowing doubt over Nicolas Sandmann’s “claims” that his classmates were being harassed, or “claims” that they were given permission to start school chants, the network brought it on home with lefty guest Tara Houska affirming that Sandmann “He got caught doing something that was incredibly racist and disrespectful, and now he's backpedaling.”

The network also failed to mention the kids and their families receiving death threats, a phenomenon spurred on by their reporting.

4. In Kentucky, School Spirit is Spelled With Three Ks

To heap more slime on the Covington boys, New York Daily News manufactured some bigoted backstory about their school community. A January 21 piece by the outlet insisted that Covington Catholic school kids were fans of the dastardly “Blackface” trope. Its evidence? Video of Covington students wearing black body paint for their High School Basketball team’s “blackout” game. The outlet also conveniently picked out a photo of an African American player from the opposite team standing in front of the painted kids, and openly wondered if they were hurling racial epithets at the victim.

Anyone familiar with high school sporting events knew that this was farcical attempt to plug leaks in the “racist teens” narrative’s sinking ship. 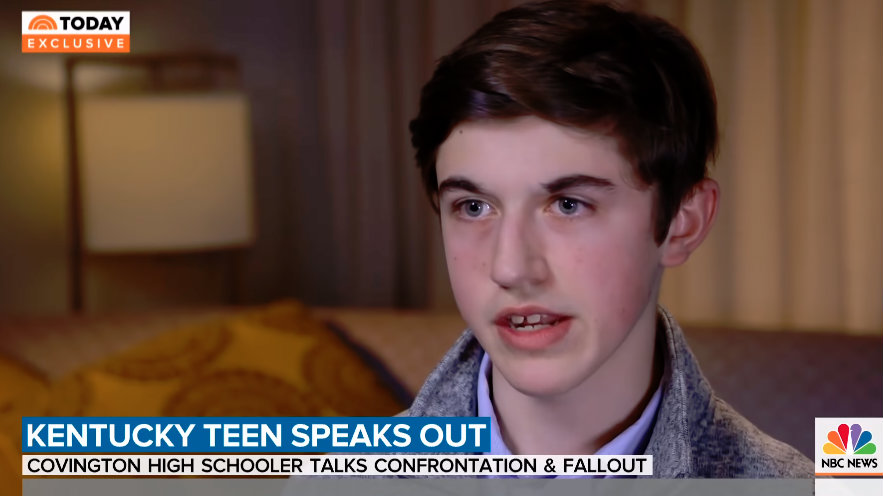 5. Millions Tune in to Watch Guthrie Scold Child on NBC

Savannah Guthrie’s much anticipated Wednesday January 23 interview with “racist teen” at large, Nicolas Sandmann, demonstrated that the media was not ready to entirely let go of their hatred for the Covington Kids. On Today Guthrie told the boy that “there was something aggressive about standing there, standing your ground.” Sandmann rebutted that he had every right to do so, but Guthrie insunuated that he was still at fault in this, via that damned “smirk.” She asked, Why didn’t you walk away?” then mentioned “the center of the firestorm, what critics characterize as a smirk, some saying it was an attempt to stare down Phillips.”

6. It Was Always About The Hats

As the fake news tide started to turn with major outlets retracting initial false reports and several journalists admitting their rush to judgment, the usual suspects were still spinning ways to blame the white boys. On January 25, Washington Post writer Matthew Sears made the claim that the kids instigated a “deliberate provocation” by wearing their “racist” MAGA hats. Cable news windbags also lamented the hateful headgear, with Chris Cuomo hosting a Prime Time discussion on January 22 featuring absurd talking points about the MAGA hat “being just as maddening, frustrating, and triggering” as a KKK hood.”

7. The Fact Checkers Are In The Sludge Too

A full week after the confrontation, the media frenzy began to subside, although there were still vestiges of liberal hate clinging to their original story. “Fact-checking” website Snopes.com got caught redhanded (once again) in being a leftist propaganda machine by obfuscating the fact that Native American Nathan Phillips lied about his Vietnam war record. On Saturday Jan. 26, NewsBusters reported that Snopes claimed it was “unproven” that Phillips lied about his war record, something that had been proven multiple times in the prior days. 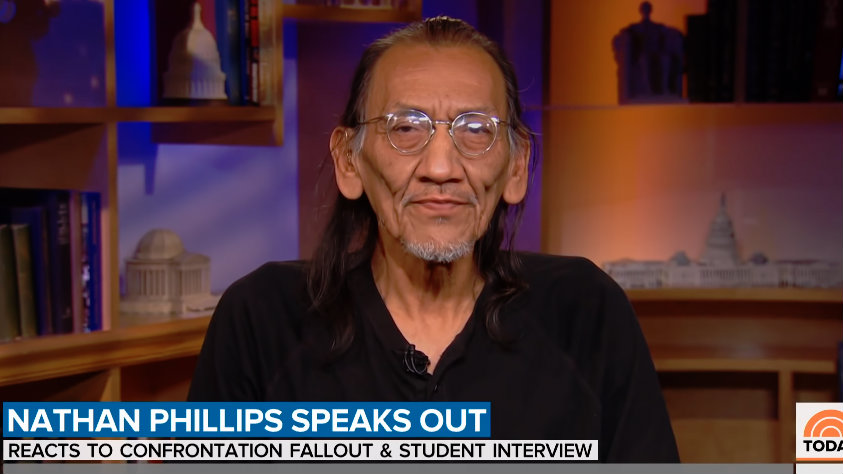 And finally, there was comedian, political hack, and “NPC” Bill Maher viciously attacking the Covington Kids after it was clear that they were innocent. On January 25, Maher lost his mind over Sandmann, and produced one of the most foul insults ever levelled at a child. “I don’t blame the kid — the smirking kid. I blame lead poisoning and bad parenting, and, oh yeah, I blame that fucking kid,” he fumed, adding the lovely little point that “I don't spend a lot of time -- I must tell you -- around Catholic school children, but I do not get what Catholic priests see in these kids.”