The liberal media are on a losing streak with the extremely dubious BuzzFeed News story and then false attacks on Catholic high school students at the Lincoln Memorial. In both cases, the liberal media have refused to take responsibility and issue retractions, acting detached in stories where they played central roles in advancing narratives that turned out to be weapons-grade fake news.

Between Saturday morning and Sunday night, CNN and MSNBC spent 53 minutes and 20 seconds on the fallout from the confrontation between Covington High School students in Washington for the March for Life, a Native American veteran named Nathan Phillips, and the Black Israelites. 29 of those minutes came before anyone realized that perhaps things weren’t as they wanted it to appear.

It would have been easy for any individual person on either network to admit on-air Sunday that they were wrong, but that’s of course not what happened.

CNN devoted the most time on the incident, giving 18 minutes and 16 seconds to the original version between Saturday and Sunday morning.

S.E. Cupp spent almost seven minutes Saturday night on her Unfiltered show, lashing out at the “mob of MAGA hat-wearing high school students” who are “clearly...not getting a good education” with parents being failures “because it makes little sense to angrily chant ‘build the wall’ to a population with literally zero illegal immigrants who were here long before we were.”

To Cupp’s credit, she issued a tweet Monday morning saying she’s “truly sorry” for “reacting too quickly to the Covington story.” If only her colleagues would do the same.

By Sunday afternoon, CNN’s coverage changed with correspondent Sarah Sidner admitting in the first of three live shots late Sunday that there was more to the story. 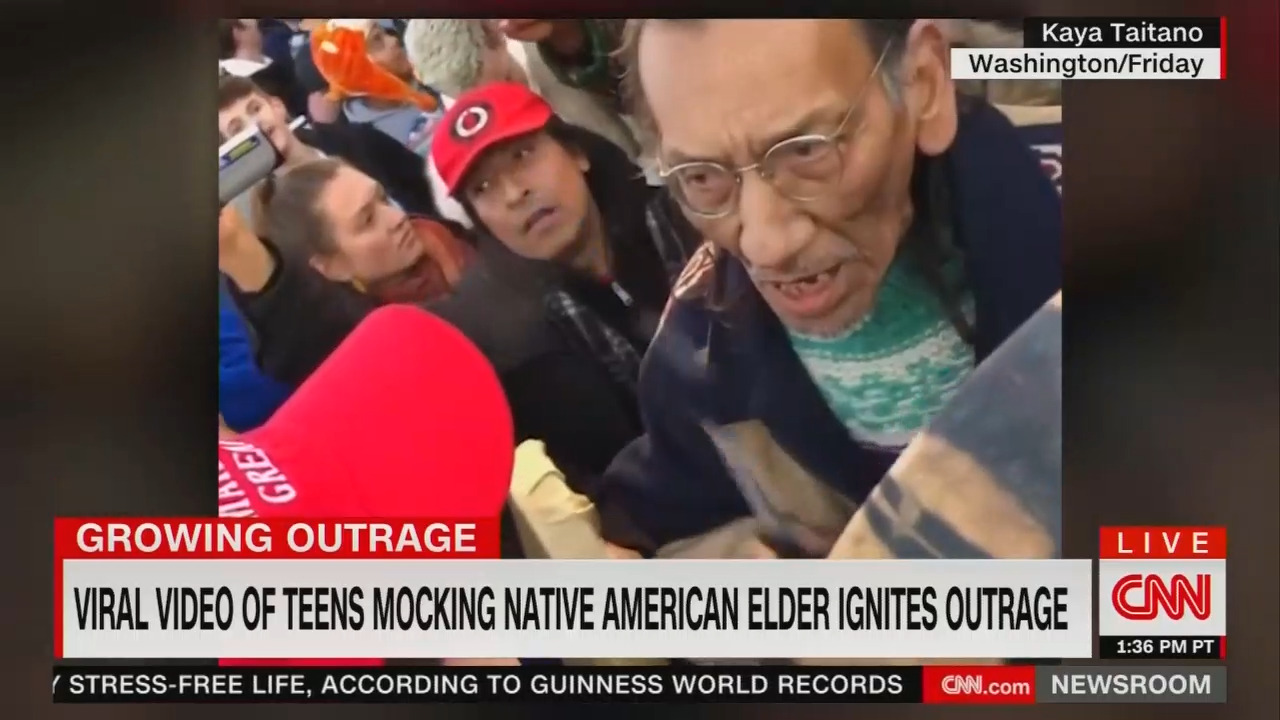 “You know, when a video from a moment in time goes viral, there is often more to tell and as we reported this story out, we found video that started a full hour before the Native American elder and a Catholic school student came face to face. We will show you why and how they came together and why some aren't only condemning the students' behavior but the adults around them,” Sidner stated at 4:36 p.m. Eastern.

Speaking the next hour to host Ana Cabrera, Sidner observed that “there's something very clear happening here” which was that “it is clear what started the tension were the black men who call themselves Hebrew Israelites” and “were being hateful towards this group of students.” Wow, how about that!

Over on MSNBC, there was slightly more restraint. 10 minutes and 44 seconds were spent between Saturday afternoon and Sunday afternoon peddling the false claims about who was instigator. Surprisingly, all but 19 seconds of that were done by Joy Reid during Saturday afternoon’s MSNBC Live and Sunday’s AM Joy.

Sunday on Kasie DC, it was repeatedly emphasized how reports of what had taken place was changing from even Sunday afternoon, but fill-in host Peter Alexander and panelists still tried to tar and feather the students. 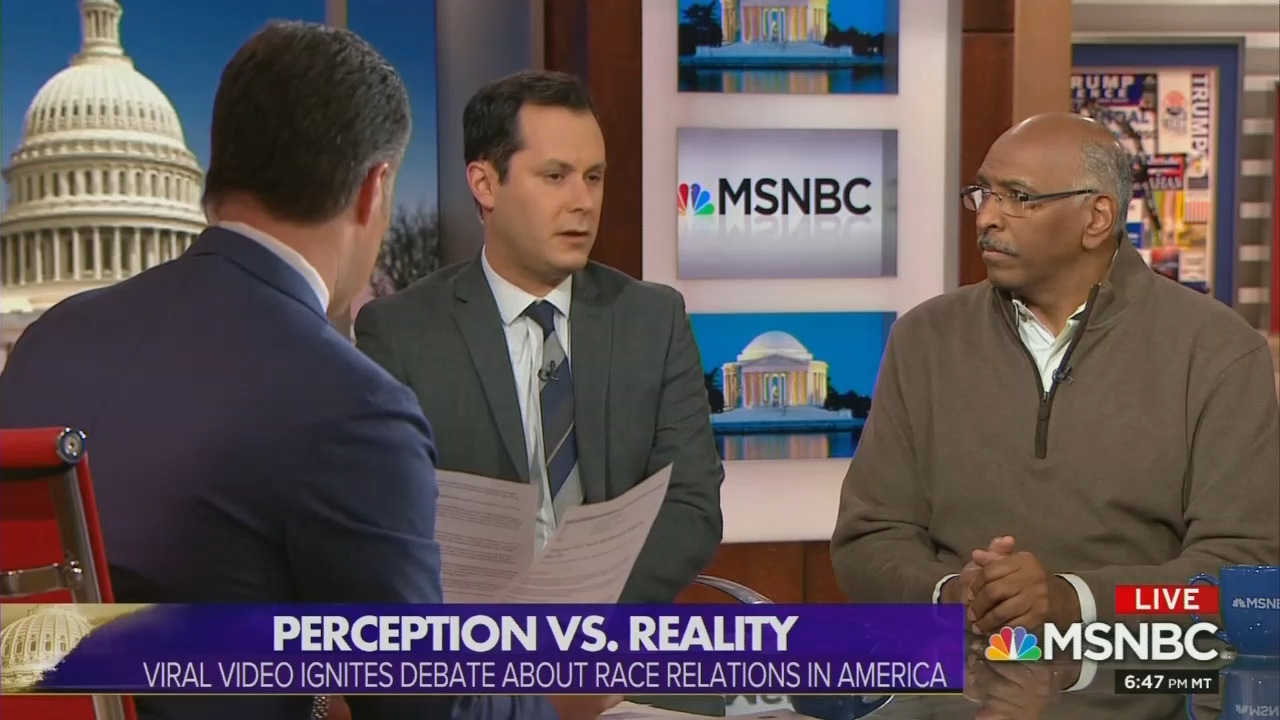 Like his panelists would moments later, Alexander tried to have it both ways:

It’s a lot to make sense of tonight and while how it started remains in dispute, the net result is that video and Americans again trying to figure out where race relations stand in this country....This really is part of a broader sort of moment in America. Right? Where things just get ugly out of nowhere on MLK weekend, for heavens sakes. This exchange, whatever the origins of it were, happens on the steps of the Lincoln Memorial.

Showing they had no shame, former RNC chairman/MSNBC political analyst Michael Steele and The Daily Beast’s Sam Stein lumped the students in with the KKK, Nazis, and pro-segregation police officers (despite the latter’s insistence otherwise) (click “expand”):

STEELE: We've come a long, long way from the — of the days of dogs — police dogs and fire hoses and lynchings and those types of things but those activities take different forms today and they manifest themselves very differently. The KKK, the Nazis, they aren't running around in hoods and burning crosses. They’re getting tiki torches and wearing Izods and pullovers, right....So it’s a very different environment. The scab on — on civil rights, the scab on racism, all that has been plucked, pricked, pulled, pulled off again, and we are trying to figure how to deal with it[.]

STEIN: Well, this is a really tricky story to unpack, especially in such a short amount of time. Part of it is just how we view news through our political prisms....Part of it, though, is our propensity to jump at the first nugget of news without waiting for surrounding context and so, there’s a lot is upsetting about that video, but in the past couple hours we've seen surrounding video, we’ve seen testimony from other key people that make it much more nuanced....You can't separate the larger context from the video. Much as we want to say it's one singular incident, the fact of the matter is that hate crimes are definitely on the rise. Instances anti-Semitism are definitely on the rise. We had a marching of neo-Nazis in Charlottesville, Virginia. This is not the same as those high school kids, but there is a context in which this is happening that people are absorbing that new cycle.