It turns out there are still a few good-humored, politically-incorrect folks in Hollywood after all. Over the weekend, lefty-bashing street artist provocateurs publicly slammed HBO’s Bill Maher with a satirical billboard depicting him not as the thought leader he imagines himself to be, but as a rote purveyor of mainstream liberal propaganda. Specifically he was made fun of as being an “NPC.” 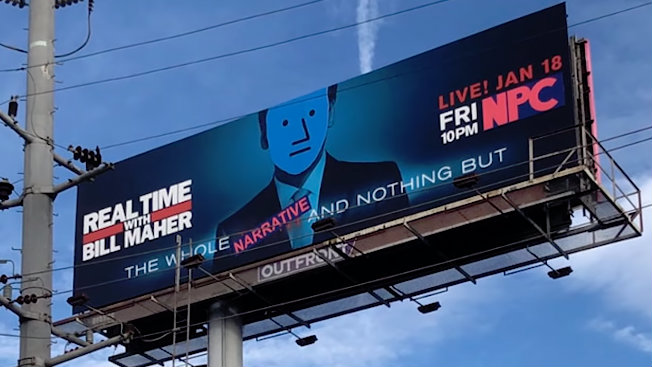 On Sunday  pranksters from conservative street artist group “The Faction” decided to point out the fact that Maher might actually belong to this category, going after a Real Time with Bill Maher billboard located at the corner of La Cienega Boulevard & West Holloway in West Hollywood. “The Faction” spray painted a gray, expressionless face over Maher’s  and changed the image’s tagline from “The Whole Truth and Nothing But” to “The Whole Narrative and Nothing But.” They also changed “HBO” to “NPC.”

This is the same group that put down dozens of mock Donald Trump Walk of Fame star stickers in response to the President’s real star being vandalized multiple times since his election.

For conservatives who haven’t caught on to the joke, as it’s definitely a trendy internet one (and who has time for all those anyways?), calling someone an NPC in this context is a political reference to those individuals who earnestly ingest and regurgitate the talking points of the left-wing media.

Originally, NPC is an acronym used by people in the video game industry and stands for “Non-playable character.” In video game language, NPCs are in-game characters that interact with the player, who’s attributes and actions are scripted by game developers.

That’s funny when talking about lefties like Bill Maher. It’s the idea that their views and thoughts are not necessarily based on individualized common sense, but reflect the mentality that progressive mouthpieces loudly push. It’s essentially programmed into them by Hollywood and PC culture, and regardless of whether their own introspection would help them to understand that carte blanche immigration, for example, would be disastrous, popular opinion says otherwise, so the NPC fits in.