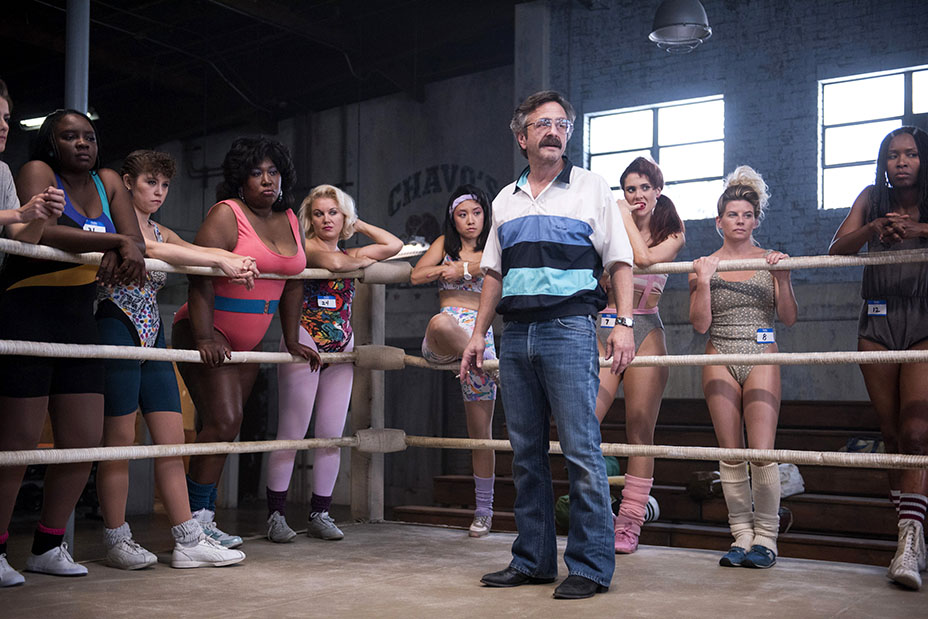 Netflix premiered its new original show GLOW on Friday, June 23. GLOW stands for “Gorgeous Ladies of Wrestling,” and though the show is inspired by the real-life GLOW from the 80’s, the fictionalized version differs greatly from the original.

The original GLOW, which centered around an all-female wrestling team, was cheesy, slapstick comedy geared toward families and children and aired on Saturday mornings along with cartoons and other kid-friendly programming.

The fictionalized GLOW centers around 14 female actresses playing wrestlers in the 80’s and is nothing more than a twisted version of the real-life show, designed to proselytize Hollywood’s extreme, liberal agenda.

Abortion, threesomes, cheating, betrayal, excessive cursing (one lovely example: "Fuck! Fuck my mother in her fucking cunt, I'm thirsty!" How's that for female empowerment?), nudity and more reign supreme in the new release, where women are exploited for their bodies yet still somehow come out feeling like superheroes whose bodies finally belong to themselves instead of the men in their life (as main character Debbie Egan, played by Betty Gilpin, triumphantly declares in the final episode). All while Hollywood cheers them on.

"We wanted to look back on the Seventies – coming out of the women's movement – and into the Eighties, and ask the question: Did it work? Did things get better? We were pitching the show pre-Trump, and we went into the pitch saying things like, 'This is a great time for women. We're about to elect our first female president.' So, a sort of double looking back is something that's really present in the show."

Maybe the “double looking back” and possibly wishing that issues such as self-identity were more prominent in the 80’s might explain the glaringly anachronistic moment when wrestler “Sheila the She Wolf,” (Gayle Rankin) tells fellow wrestler and main character Ruth (Alison Brie) that she knows she’s human, but that spiritually she is a wolf.

It didn’t take long for rampant sex and nudity to set in to the show. The first nude scene was five minutes into the first episode, and the first sex scene was 17 minutes in. And for extra flair, the sex scene was Ruth sleeping with her best friend Debbie’s (Betty Gilpin) husband. That created the perfect tension needed to get Debbie, a former soap celebrity, to sign on as the star wrestler to Ruth’s “heel.”

The leader of GLOW is racist, misogynistic, drug-addicted director Sam Sylvia (Marc Maron). Sam is a B-movie director with works such as "Gina the Machina" and "Oedipussy," movies that wrestler Justine (Britt Baron) is a fan of and feels are just like GLOW, "but with a more subversive message about the limitations of feminism and nuclear power."

We get another dose of incest as Sam hits on wrestler Justine, saying he “doesn’t even care that she may be a minor,” only to find out that she’s his daughter. Thankfully, that stopped him at least.

Shots at Reagan and Republicans

The first conservative slam came 22 minutes in to the first episode. (Took them awhile!) as Ruth is accosted by a group of skateboarding young boys who yell, “Fuck you, Nancy Reagan!” at her as they steal her food and purse. Not sure how that made any sense, but okay, any chance to curse out the Reagans, I guess.

Episode three, “The Wrath of Kuntar,” introduces us to rich, young producer Sebastian “Bash” Howard (Chris Lowell), who is using his family’s money to fund production of GLOW. We should know he’s conservative because he’s rich, white and on drugs, but just in case we don’t have liberal bias running through our veins, the writers make sure we know this by giving him this opening line, “Ronnie takes out his pen, signs the picture, and he says, ‘It’s a good thing Bonzo is a Democrat, otherwise he'd have won the nomination.’"

And it’s Bash who comes up with the offensive, stereotypical roles for each of the women, such as “Fortune Cookie” for an Asian wrestler and a terrorist from Beirut for an Indian. Because, of course.

In episode four, “The Dusty Spur,” Tamme (Kia Stevens), one of the black wrestlers, confronts Sam over her character "Welfare Queen" and in typical liberal fashion, Sam reassures her in the most nonsensical way:

Tamme: I have some concerns about my character.

Sam: That's the genius of it. It's commentary on an existing stereotype. It's sort of a fuck-you to the Republican Party and their welfare reform and race-baiting shit.

Tamme: Yeah, but would other people know that?

Tamme: My son. He goes to Stanford.

Sam: What, you've never had a role you've been uncomfortable in before?

Of course, reinforce racial stereotypes and blame it on conservatives!

In the ring, as the announcer calls Welfare Queen a “liberal leech on society,” she starts throwing welfare checks in the air. “Ya'll afraid of me, right?” she asks. “Do you believe what President Reagan says? That I'm cheating the system?”

I’m sure the left loved Sam’s hatred toward conservatives in episode 9, “The Liberal Chokehold,” as well.
Bash’s mother Birdie is hosting a fundraiser for Nancy Regan’s “Just Say No” campaign and Sam and the women crash the party posing as former drug addicts who are there as speakers in order to get rich donors at the party to fund GLOW (Bash’s mother froze his access to the family’s funds after he spent thousands on the show.) 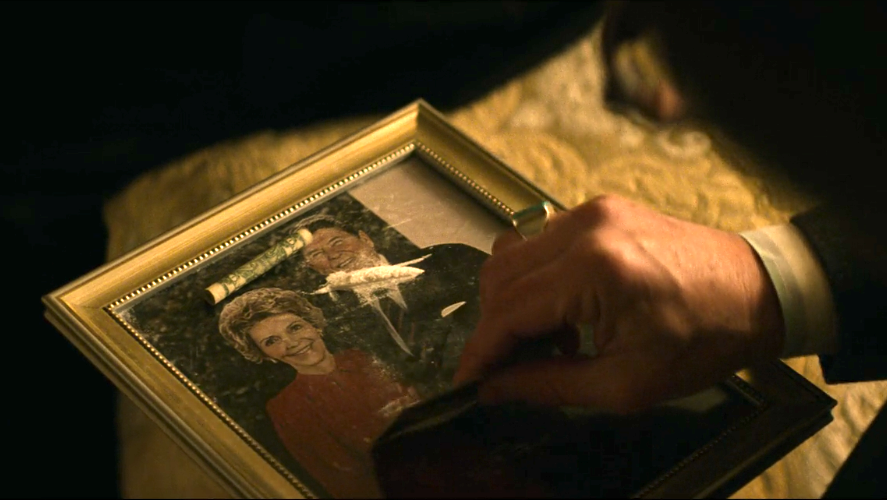 Sam is disgusted by Birdie and all of her guests and says, “This is such bullshit. Fighting the drug war while they get loaded on Kir Royales. Fucking white, right-wing idiots.” Nothing like a white character decrying white people and being racist towards blacks. Such a golden-hearted man!

He then decides to ask the two black men in the crowd from the band if they have any "blow" or if they'd like some. More racist behavior, but it was presented as cool and edgy. They move to a private room where they proceed to snort coke off a framed photo of Ronald and Nancy Reagan.

Later, when wrestler Melanie “Melrose” Rosen (Jackie Tohn) uses a ketchup bottle to pretend to miscarry in the ring to taunt Cherry, Sam declares that she’s “on to something” and starts to direct the women in a potential future match:

Sam: What animal would kick a pregnant woman in the belly? What kind of person would ruin the life of a gorgeous, successful, pregnant woman? What kind of home wrecker would do that? Ruth! This doesn't seem like too much of a stretch for you. Why don't you come in the ring, join us?

...Look at this asshole. She doesn't care about anyone else but herself. She's gonna destroy lives. Even tiny lives that haven't started yet. You're a horrible person and you don't deserve to live…Now here you are. You're ripe. Fecund. A custodian of new life. You're a fertile harvest goddess...Okay, now stick your belly out a little bit. You're pregnant. Everything is fine. Everything is ideal. Until the home wrecker arrived. She has nothing. No man, no love, no friends. Her hair is brown, the color of shit. All right. Now, lunge and miss...Now it's time for the big move. You're gonna kick her in the stomach, set off a miscarriage that will ruin not one life, not two lives, but three lives in the process ...Now that is a fucking miscarriage.

Sick. But I suppose it's progress that he acknowledges life in the womb.

But all it took was a cold and callous abortion scene in episode 8, “Maybe It’s All the Disco,” to make The Hollywood Reporter label Sam as “caring” while Salon.com described him as “goldenhearted.” (Check out Katie Yoder's in-depth analysis of the abortion plotline.)

Episode ten, “Money’s in the Chase,” is apparently supposed to redeem Sam’s racist ways as he plans a surprise ending to the wrestling season. First “Machu Picchu” (Britney Young) faces off against “Welfare Queen” in the ring.

Later, after Debbie’s character “Liberty Belle” defeats Ruth’s “Zoya the Destroyer,” and the matches are supposed to be over, Sam has Tamme “The Welfare Queen” come back with a last-minute surprise and grab the crown from Liberty.

The Welfare Queen: You want this crown back? You fight me for it.

Debbie: Tamme it's fine. It's over.

The Welfare Queen: Guess not. Sam changed it.

To the crowd: America, you have turned your back on me long enough! You've ghettoized my people, trapped us in an endless cycle of poverty. Not anymore. Tonight, I take back what I deserve!

I suppose, in addition to the abortion storyline, this scene might also account for the left’s complimentary reviews on Sam’s character since, in the end, he had The Welfare Queen triumph over the blonde, white girl, who listed Ronald Reagan, Larry Bird and Jesus Christ as her three favorite people. But for me, it didn’t erase all the racism, misogyny, drug use and just plain crude behavior.

We’re really supposed to believe that all of it was subliminally empowering? Like, "Ah, but don't you see? Underneath all the offensive stereotypes, using women as sex objects, the hateful racism, and women allowing a coke-addicted man to emotionally abuse them, it was all actually done to empower women and blacks!! Surprise!! Joke's on you!”

Yeah. Not buying it.

GLOW defies everything that true feminism should be…the kind of feminism that both conservatives and liberals can agree on - that women should be treated equally and not be objectified or disrespected and that our daughters should grow up feeling empowered to believe in themselves and not accept abuse, racism or misogyny in any form.

You would think that liberal social justice activists would be appalled by GLOW and all that it stands for. But Sam’s character has something going for him that would excuse just about anything in the left’s opinion, even racism and misogyny: he’s a liberal, anti-Reagan, pro-choicer who helped a woman have an abortion. In the world of liberalism, that pretty much makes him some sort of god.

Something tells me they wouldn’t be so forgiving of his racist, sexist ways if he were conservative.

So, it begs the question. Does the Hollywood left truly care about racial and feminist issues? Or is it really all about furthering one political party over another, no matter the cost?

If we go by the lessons revealed in GLOW, my money is on the latter.