After a tiny bit of plot, we jump right into the issues-based portion of the show with a scene with Ivy (Alison Pill) in her restaurant serving Kai's alt-right "army" of blue shirts. One of them comments to Ivy, "Your bangability would go way up if you just smiled." That sets Ivy off, "How did this Handmaid shit even happen?" It really has nothing to do with the plot of The Handmaid's Tale, which is a cautionary tale about a big government theocracy, but it's become a catch-all for all things feminist.

Ivy, Winter (Billie Lourd), and Beverly (Adina Porter), reduced to waiting on and cooking for the men, then meet in the kitchen to rant about how "48 hours ago, we were on the verge of toppling the patriarchy!" Beverly makes it clear that this is a temporary situation, telling Winter that "come the end of the week, if I'm still in this goddamn kitchen, I'm coming for [Kai]. And you better get the hell out of my way."

From there, we see the newly-elected city councilman Kai (Evan Peters) successfully getting his colleagues to pass a motion that would put armed private security on the streets. The audience is filled with Kai's blue shirts, many of them openly carrying what the mainstream media would call "assault rifles." One of the council members isn't so sure about the proposal, but Kai points out that, while he lives in a gated community, his daughters can't always be behind those gates. Getting the hint, the council member quickly votes in favor. Hot takes on The Handmaid's Tale and guns, and we aren't even ten minutes into the episode. 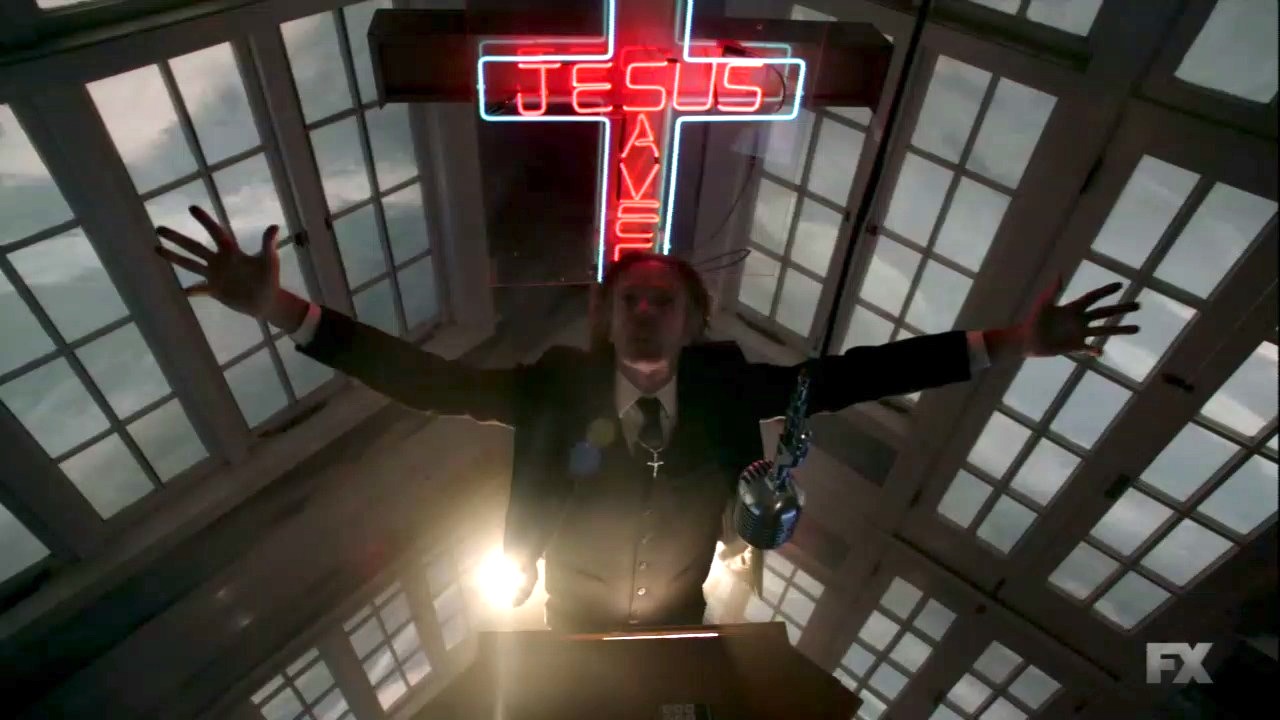 here it really starts getting crazy. Winter tells Beverly how everything started when she and her brother Kai used to spend their time "trolling the social justice warriors." It showed them going to pro-abortion websites and writing things like, "Why should we allow abortion 'For the health of the mother' when the baby is the only part of that duo without sin?" or "Man can never escape from temptation because, in birth, he passes through the vagina, which has been desecrated by the filthy act of sexual intercourse." Is this how they think pro-lifers think, let alone speak? Apparently they do, because it got them a message on the Dark Web from "Pastor Charles" to come visit what he calls Judgment House.

It turns out Judgment House is a house of horrors where Pastor Charles is punishing real people for their sins. They find a woman strapped to a gurney bleeding to death from an abortion begging for help, and Pastor Charles' voice comes over the loudspeaker asking, "Who shall speak for the unborn?" In another room, an addict is being pumped full of drugs and another man is being held captive and about to be stabbed through the chest for being a "sodomite," as Pastor Charles recites Leviticus.

This whole segment of the show paints Christians as every bit the hypocritical, judgmental extremists liberals imagine them to be. Pastor Charles is busy standing in front of a neon "Jesus Saves" cross condemning everyone to death, quoting Scripture, but he's not particularly interested in the truth.

It turns out the "pastor" kidnapped the woman from a Planned Parenthood, only she went there to be treated for a urinary tract infection, not an abortion. (Thanks, AHS for reminding us that Planned Parenthood is so important for healthcare and not at all for abortions! /sarcasm) The addict was kidnapped from a rehab clinic where he was trying to get clean. The other man was kidnapped outside of an AIDS clinic, but he was actually there volunteering.

Kai ends up killing Pastor Charles to save everyone and going back on the Dark Web to save others but, as Winter tells it, it was then that he decided the whole world had to be destroyed and rebuilt. To get that job done, he pretended to be a Donald Trump supporter and used many of his messages to get elected to city council and build his cult.

You think we're done? Just wait! Next, Winter goes to talk to Kai about acting like a psycho in the present day, but he has an idea to make everything better. "We're just the seed," he tells her, "And from that seed, from the blood we share, a savior will arise to carry on our mission. You... will be the mother of our messiah baby." 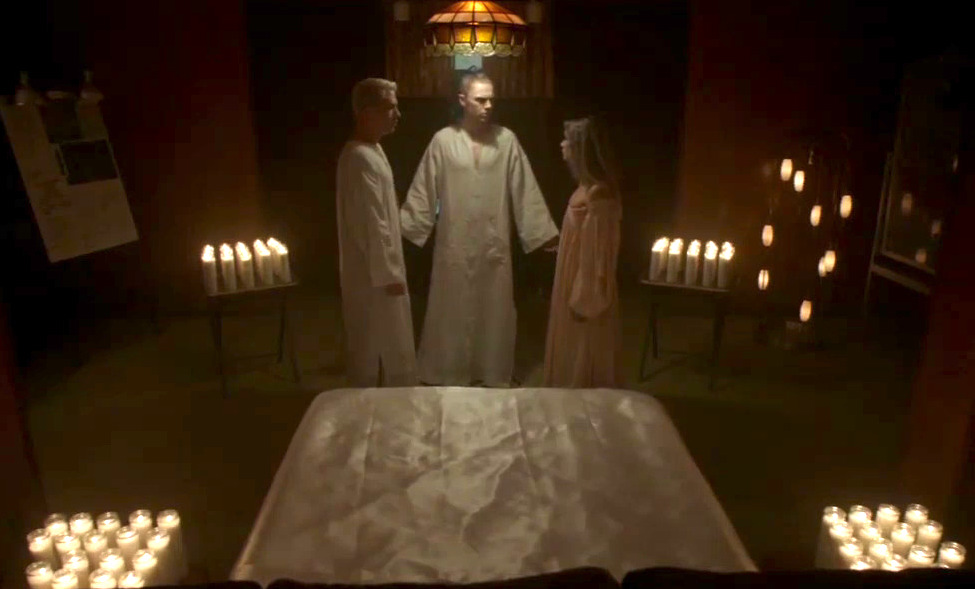 Winter points out that, as they're brother an sister, that's incest and incest is icky. So, instead, Kai is going to have another man be "the instrument of our union." Kai will have Samuels, a gay policeman in their cult, have sex with Winter and, while that is going on, Kai will have sex with Samuels. "That way," he tells Winter, "I will be the father, but you will remain pure and unsoiled. You cool with it?" He's very thoughtful like that.

"I can't believe I was at the Women's March three months ago," Winter says under her breath, as she allows herself to be controlled by the patriarchy and Kai begins the ceremony for "the sacred copulation." He puts "I Swear" on the iPod which is declared "a holy song now, like the Lord's Prayer."

He tells them they must begin the "holy ritual," i.e. his sister being made to have sex with someone that he will simultaneously be having sex with to produce a Messiah baby. Fortunately, Samuels is unable to perform due to the fact that he's gay, and Winter bails because she very fairly feels like she's being raped. No wonder this episode is called "Winter of Our Discontent." I'd be discontented if I were Winter, too. Now that this show has gone for incest, there aren't a lot of taboos left to cross off the list.

We have a much-needed moment of levity after that horrible scene when Ally (Sarah Paulson) has Kai over and he guesses what's for dinner: "Leftist salads with quinoa and green goddess dressing?" (It's actually Sloppy Joes, but that was a good joke for a complete nutcase who gets people to dress like clowns and commit homicide). Also, Winter's penance is dumping  trash and recycling on the side of the road because Kai "doesn't believe in global warming." I wonder if that's worse to some lefty viewers than the whole homicide thing. Hard to say.

We also find out some backstory on Samuels' relationship with Kai while he and Winter are in the car together. He met Kai when busting him for writing fake prescriptions and, as a crooked cop, just took a percentage of the money. That wasn't a surprise, but you know what was (kinda)? He's a Nazi! This show thinks very highly of the police, does it not? Kai is the one who helps Samuels realize that he's gay, and of course they are shown having sex.

Samuels tries to complete his mission to impregnate Winter by raping her (the only way he can perform with a woman is by strangling her) but she steals his gun and tries to get him to repeat the mantra she learned in last week's episode that all men are supposed to say to women, "I am a turd." He won't say it, and Winter gets more and more upset about the things she (and feminism) hasn't been able to control.

Hard to get a more ringing endorsement for the resistance than that.

That takes us pretty much to the end of the episode or, at least, of the socially-aware, political portion of it. The show wraps up with some non-political plot including Kai cutting off his brother's pinky and brutally murdering him, but that is neither here nor there.

Now, aren't you glad I didn't add any video clips?