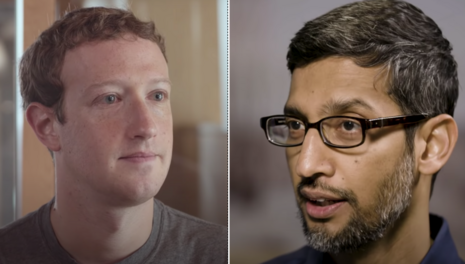 It looks like the harbingers Dr. Robert Epstein had warned the country about regarding liberal Big Tech’s influence in elections are coming true.

Big Tech giant Facebook informed the Media Research Center that it would be partnering with the nonpartisan digital encyclopedia Ballotpedia and the radical left-wing organization Democracy Works to help formulate the online platform’s 2020 election strategy. What makes this partnership so damning is that Democracy Works in particular has been heavily funded with millions collectively by at least six liberal organizations between 2012 and 2019.

Also concerning is that Big Tech giant Google is also working with “Democracy Works to make sure it's surfacing only true information — and not, Google engineering VP Cathy Edwards said, things like false claims of victory,” according to Protocol. [Emphasis added.]

Democracy Works proclaims itself to be “nonpartisan,” but its donors, biased staff and its heavily partisan board of directors shows that it is anything but nonpartisan.

In total, these six liberal organizations alone have given at least $10,628,999 collectively to Democracy Works between 2012-2019. 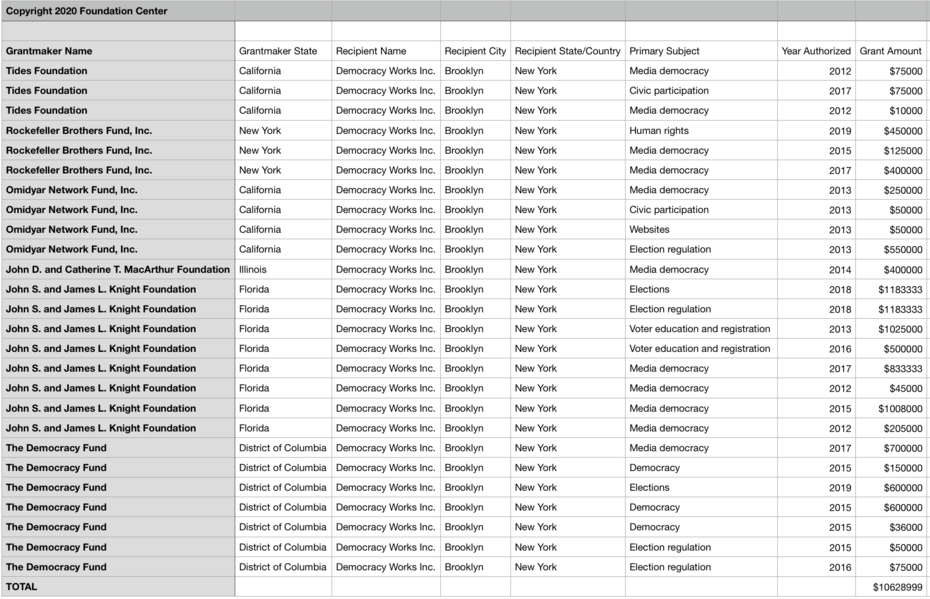 Just a glance at the Democracy Works blog reveals its leftist political stance. Democracy Works Co-founder and Executive Director Seth Flaxman published a blog June 4 headlined, “Our Democracy Fails If We Don’t Protect Black Lives.” In the article, he decried America as being built on slavery:

For over 400 years, America has systematically and violently oppressed Black life. Historically, Black communities have been forced to fight for rights afforded to white citizens in a country built on Black enslavement,  [emphasis added].

He also suggested that racism is embedded into American society:

If we attempt to improve our democracy without reckoning with the racism embedded in our way of life, we will only perpetuate the harms Black voices have enumerated for centuries, [emphasis added].

Flaxman then attacked America again, as he wrote on the subject of diversity of his organization. “Incorporating the full humanity of our Black teammates means supporting the need to process the trauma of living in a country that dehumanizes Black life on an on-going basis.” [Emphasis added.]

What makes this worse is that Facebook included notice of its collaboration with Democracy Works on its corporate website under a section headlined: “We help prevent the spread of misinformation and provide additional context so people can make informed decisions.” However, strangely, Facebook has since dubiously removed its info about working with Democracy Works from that corporate web page.

Flaxman stated that “Black Americans have been given every reason, and therefore deserve every right, to express their grief and voice their grievances the best way they see fit.”

Schreur’s LinkedIn profile shows that she interned at the digital, communications and creative agency BerlinRosen between September 2015-December 2015. A quick glance at the agency’s issue advocacy page reveals a trove of left-wing propaganda. The page’s featured photo showed an abortion rights protest occurring in front of the Supreme Court.

The page stated: “Our clients are fighting to advance equity, fairness, and justice across today’s most urgent issues—gender equity, sexual and reproductive rights, systemic racism, immigration, criminal and civil justice reform. And we’re with them every step of the way.” [Emphasis added.]

One of its clients, is the radical left-wing, pro-boycott organization Color of Change and the pro-abortion group Physicians for Reproductive Health.

Odd that a Warren donor who interned for a radical leftist organization will be spearheading Democracy Works’s election research in conjunction with Facebook.

Federal Election Commission records show that Carpenter, like Schreur, gave a number of small-dollar donations to Warren, including one donation to the Ditch Fund, which is actively working to unseat Senate Majority Leader Mitch McConnell (R-KY).

Democracy Works Board of Directors

The Democracy Works Board of Directors is just as badly skewed Democrat and liberal. In fact, only one of 12 board members, Mike DuHaime, has a solid record of donating exclusively to Republicans.

This means that at least nine of Democracy Works’s 12-member Board of Directors can be connected to Democratic candidates, left-wing causes or liberal organizations.

Dr. Epstein’s words bring a chilling perspective on what Facebook and Google may be up to this November:

Conservatives are under attack. Partnering with an obviously left-wing organization like Democracy Works is clearly an indicator that Facebook won’t be keeping its election strategy neutral. Contact Facebook headquarters at 1-650-308-7300 or 1-650-543-4800 and demand it cut ties with Democracy Works and stop meddling in the 2020 election. If you have been censored, contact us at the Media Research Center contact form, and help us hold Big Tech accountable.