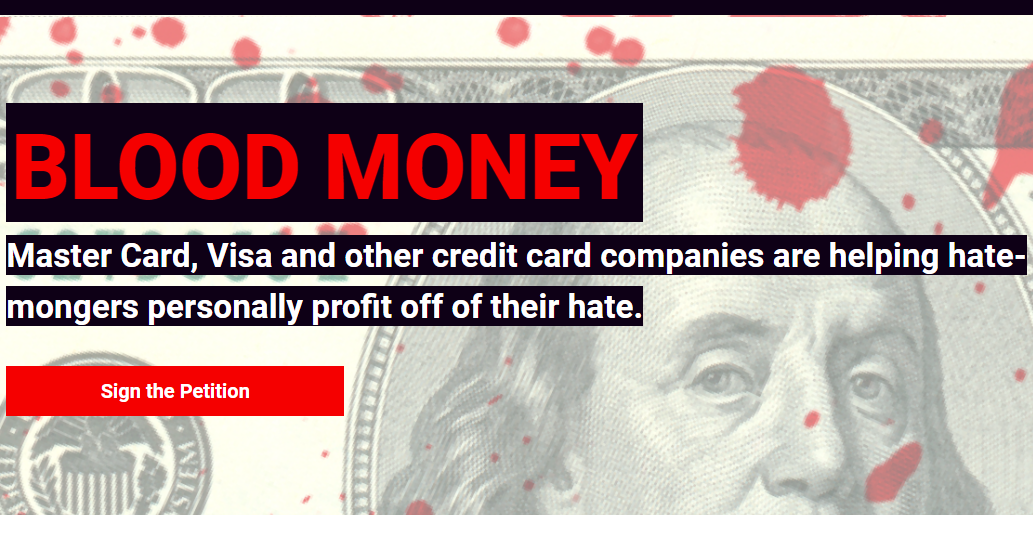 Editor's Note: This story has been updated to include a comment from ACT for America.

A liberal, Soros-funded group is using the Charlottesville violence as an excuse to target conservative organizations by mislabeling them “white supremacist hate groups.” This is just the latest attempt by the left to use hate lists to try and undermine conservative groups they disagree with.

Color of Change, the “nation’s largest online racial justice organization,” launched a #NoBloodMoney campaign to force credit card companies, payment services and Amazon to cut ties with “more than 100 white supremacist hate groups” on August 16. There is also an accompanying petition. Color of Change was co-founded by CNN political commentator Van Jones and received $1,380,000 from George Soros between 2012 and 2015 (The 2016 records haven’t been released).

The Blood Money website lists several conservative groups like the American Family Association, the David Horowitz Freedom Center and ACT for America -- organizations which have absolutely nothing to do with race, let alone being white supremacists. Yet the campaign’s wording strongly implies that most, if not all, the 123 groups listed have white supremacist objectives.

“These companies are not just helping white supremacist groups to raise tens of millions of dollars - they are also profiting off this hate,” the campaign argued.

The Blood Money hate list may merely be the result of either hasty, substandard “research.” Or it could be a calculated malicious effort to smear conservatives as white supremacists.

The Blood Money campaign does not state where its list of “hate groups” came from, nor did Color of Change respond to inquiries for that information. However FastCompany, an online business media outlet, speculated the hate groups were “identified by the Southern Poverty Law Center [SPLC].”

ACT for America told MRC Business, "Color of Change is attempting to use the Southern Poverty Law Center's fundraising model of lying about conservatives and conservative organizations to serve their own desire to raise cash."

The SPLC has its own extensive history of labeling conservative organizations “hate groups.” The “hate group” classification even played a part in a shooting at the Family Research Council in 2012.

"The claims made by this organization against my group are false, defamatory, and actionable,” Center for Family and Human Rights (C-FAM) president Austin Ruse told MRC Business.

David Horowitz, founder of the David Horowitz Freedom Center, took a similarly strong stance. “Every claim in the Color of Change statement about us is a lie, beginning with the claim that we are ‘the premier financier’ of anyone or anything,” Horowitz said in response to Blood Money’s claim the Freedom Center funded “anti-Muslim voices and radical ideologies.”

“The Color of Change blacklist is an attempt to suppress organizations that oppose the racist agendas of “Color of Change.” It is also an obvious hustle for credulous dollars and part of a general leftwing assault on the First Amendment and effort create a one-party nation,” Horowitz concluded.

According to ACT for America, Blood Money's claims "are fabrications, as even a casual look at our website would have informed them, had they wished the truth."

"All of our communications make clear our policy towards hate," ACT for America continued. As its website reflects, Act for America "welcomes all, discriminates against none, and requires that members act at all times peacefully and with honor." Furthermore it condemns "any organizations or individuals advocating violence or hatred towards anyone based on race, religion, or affiliation."

The American Family Association (AFA) meanwhile said the hate list was nothing more than an attempt to “silence us.”

“It has become all too common that groups who claim to oppose ‘hate’ actually foment the majority of hateful rhetoric in our country,” AFA stated.

AFA and C-FAM also called out Color of Change for attacking groups who help minority communities.

“It is odd that a group calling for racial justice would make these claims since my organization is a very close adviser to the African Union, and dozens of individual African and Caribbean countries," C-FAM’s president said.

Meanwhile AFA said it was “unfortunate that Color of Change isn’t protesting the millions of minority babies who have been killed via abortion or confronting the murder rate in Chicago, which directly affects black families.”

This isn’t the first time the Soros-funded group has targeted conservatives by trying to undermine business relationships.

Color of Change initiated an attack on companies like GEICO, Progressive Insurance, and SC Johnson to force them to stop advertizing on Glenn Beck’s Fox News program in 2009.

Color of Change co-founder Van Jones likewise claimed the GOP Convention was a “hate-fest.” Then when Trump won the election, Jones claimed it was because of “white lash against a black president.” A claim he retracted a month later.