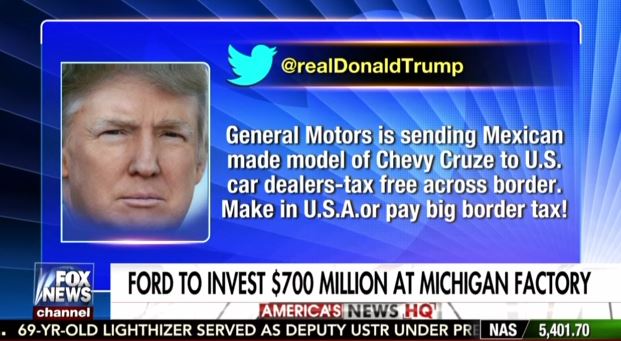 The media remain steadfast in their opposition to now-President-elect Donald Trump.  In their attempts to deny him first the office and now legitimacy therein, they have come up with all sorts of shorthand descriptives that are either vague or outright disingenuous.

One of the most annoying of these - is “Donald Trump is anti-(free) trade.”

A parallel example: President Barack Obama can declare over the war on Islamist jihadism - but he can only stand down our side.  Until ISIS, the Muslim Brotherhood, Al Qaeda, Hamas, Hezbollah, Islamic Jihad, the al-Aqsa Martyrs' Brigades,…(ad nauseam) also agree to stand down - the war on Islamist jihadism ain’t over.  It takes all parties to agree that something is over - for it actually to be over.

So when people say what we have now with, say, China is “free trade” - and that Trump threatens it - they are either woefully, willfully ignorant or lying their faces off.  Trump wants to stop pretending our “free trade” is free trade - and for that he is roundly, loudly castigated.

Some others have for a while been accurately pointing out Trump’s correctness.  Gordon Chang, for instance - author of the tome “The Coming Collapse of China.”  Chang was on CNBC on March 10, 2016 - stating the very obvious: “‘People say [Trump] would start a trade war. Well, no matter what The Donald does he can't start a trade war because we're already in a trade war with China. But only they are waging it,’ Chang told CNBC. ‘The question is how do we end it on terms not only advantageous to the United States but also to the international community.’”

A simple Web search for “China Tariffs on US Goods” - tells much of the tale the media won’t.  China manipulating its currency to warp the world market - is trade warfare, not free trade.  Oh - and China stealing $300 billion per year in U.S. intellectual property is certainly all warfare all the time.

Enter Trump.  Who is one of the only people (besides Chang - and every average American) who acknowledges the very obvious reality of our ridiculously one-sided “free trade.”  Who realizes that you can not unilaterally disarm in trade negotiations - or lots of money and jobs pour out of your country.  As we have spent the past several decades witnessing here.

A parallel example: “Free trade” of farm products.  Our ridiculous Farm Bill has not only created a domestic nightmare mess - it has warped the global market as well: “Our Farm Bill helped incept and foster an international regulatory arms race. A terrible multi-governments poker game – where farming nations everywhere saw and then raised everyone else’s taxes, tariffs and subsidies.  That’s a lot of governments – engaged in a lot of inanity.”

Oh - and there’s China again waging war on us: “U.S. Calls Out China on Agriculture Subsidies: Upping the ante on efforts to show it can enforce its existing trade agreements, the Obama administration on Tuesday filed yet another World Trade Organization (WTO) dispute against China, accusing Beijing of exceeding allowable subsidy levels for rice, wheat and corn.”

But it ain’t just China.  For instance: “Brazil is considered a developing country, but has become an economic power as a major exporter and agri-food now accounts for 28 percent of GDP.  The Brazilian government’s recent notification to the WTO of agricultural subsidies for the 2009/10 crop year has raised issues about Brazil’s positions on trade-distorting domestic support policies.  Total farm support by the Brazilian government as defined by the WTO was valued at $10.0 billion for 2009/10.”

Unilaterally ending our participation in the Farm Trade War - against nations this weaponized - will work just as horrendously as unilateral disarmament has everywhere else.  And we’ll yet again watch coin and employment pour out of our country.

And what’s worse than not making TVs and iPhones here?  Not growing food here.  Because before you fire up either of the former - you have to fire up the stove.  If things global really go sideways - our inability to import entertainment will be of far less import than our ability to bring in sustenance.  Far better we keep making food (and, while we’re at it, lots of other things) here.

Florida Republican Congressman Ted Yoho has long had a solution.  He applies his solely to the sugar trade - but as Trump is now pointing out, we should be applying it to a whole lot more than just that: “Rep. Ted Yoho, R-Fla., reintroduced a bill Friday that encourages the administration to target foreign sugar subsidies. Under the “Zero-for-Zero” plan, U.S. sugar policy would also be rolled back in exchange for the elimination of foreign programs, which Yoho says are distorting world prices and inhibiting a free market.”

Indeed they are.  But as we’ve seen time and again, on all sorts of exports and imports, the U.S. alone not subsidizing and tariffing ain’t free trade.  And it ain’t good for us.

If we want actual, actually free trade - and with it the jobs and wealth that will return and stay here - you want less government not just here, but everywhere.