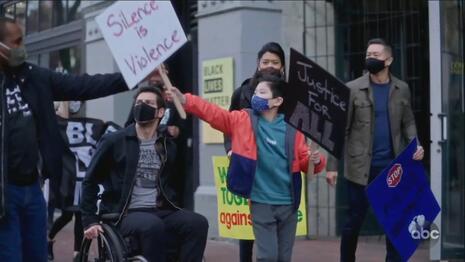 There’ve been an onslaught of shows lately with storylines centered around the Black Lives Matter movement. On Wednesday, it was ABC’s A Million Little Things’ turn to create fear and division with lines like, “As a Black woman, I don't feel safe in my own body anywhere,” and, “There are police out there looking for a reason to take your life.”

The episode "Listen" picks up from last week when black, married characters Rome (Romany Malco) and Regina (Christina Moses) are hosting a family dinner and see the George Floyd video for the first time. This week, most of the show’s characters are preparing to participate in a BLM march in response to the video, but Rome’s father Walter (Lou Beatty, Jr.) is jaded and asks, “What’s the rush? The country is still gonna be broken no matter what time you get to the protest.”

Walter also points out that he “fought for this country in Vietnam, came back to a bunch of kids protesting, and nothing being different.” I agree, Walter. The way soldiers were mistreated back then should have taught this country how wrong it is to disrespect good, honorable people who are risking their lives to serve and protect. Unfortunately, someone missed the memo and now innocent police officers are being harassed, threatened, shot and even killed when they’ve done nothing wrong in today’s society.

Rome isn’t attending the march so that he can protect his mental health (he suffers from depression and was once suicidal). He tells Regina he doesn’t trust himself right now, and that, “(Floyd’s) murder kind of feels like the last straw for me,” while adding a subtle threat: “If a cop so much as blows a whistle wrong...” He then sadly spreads more anti-cop hate and falsehoods to Tyrell (Adam Swain), the teen boy they're fostering. After that, Maggie gets a black female caller on her 5 minute therapy podcast who has let her unfounded fear of violent death at the hands of racist whites consume her:

Rome: There are police out there looking for a reason to take your life. Young man, do not give them a reason. Your job is not to be a hero today. Your job is to come home.

Maggie: Well, Tiffany, it's a tough time, and feeling anxious is natural, even for those of us who usually aren't. Uh, one way to help manage anxiety is exercise.

Maggie: Me, too. I went for a run this morning.

Tiffany: Yeah. But after learning about Ahmaud Arbery, I just don't feel safe doing it. And I'm not sleeping well because I keep thinking about Breonna Taylor. What happened to her happened in her bed. As a Black woman, I don't feel safe in my own body... anywhere, especially right now, and I don't know how to fix it.

Maggie: I'm really sorry. Uh, do you have a therapist?

Tiffany: I met with a couple people, but none of them felt right. It just didn't feel like we have the same life experiences.

Maggie: I think it would help you to have a therapist who could validate and support you. I actually have a colleague that I think that you would really like.

Maggie: In addition to being an exceptional therapist... Dr. Madison is also a black woman, and so I think that she might be able to identify with you more closely. Uh, let me give you her number. It's...

Claudia: I had to cut you off ten seconds ago.

The lie that police officers had no reason to raid Breonna Taylor's apartment -- and skipping over the part that Taylor's boyfriend had opened fire and shot a policeman in the leg, causing police to fire back -- adds fiction to this "ripped from the headlines" plot. It further harms race relations and is unfair to decent, good, hard-working police officers who don’t have a racist bone in their body. Not to mention inciting the kind of fear displayed by this caller. Breonna’s own mother has called BLM a “fraud” that's “never done a damn thing for us.”

Rome and Walter have a heart-to-heart discussion about Rome’s depression, which he blames on "this country," saying it makes him “feel like an unwanted guest in (his) own home.” Walter understands and says that black people are meant to “live feeling like death is breathing on your back:”

Rome: And as I've been dealing with my depression, I'm realizing it's not just something I'm pre-disposed to. It's this country. This world and all the things -- all the things, every day, making me feel like an unwanted guest in my own home.

Walter: Believe me, I understand. I was 11 years old when your grandfather showed me Emmett Till's photo in Jet magazine. It's still there. Burned into my mind. I've been looking at this a whole lot longer than you. I saw it here, I saw it in Vietnam, and I came back home and saw it over and over and over again. That's what it's meant to be us. To live feeling like death is breathing on your back. And they're still out there thinking posters can fix that.

Rome gets a call that Regina’s been hurt at the march and he rushes to the scene. Of course, it was the police who caused the injuries:

I'm telling you, Rome, we were marching peacefully. The cops just started pepper-spraying everybody, so we started running. This older guy, he tripped, Gina went to help him up, and this cop pushed her down with his nightstick. Her head hit the pavement.

And what good would a liberal BLM-themed show be without white guilt and having the white characters end up reckoning with their race? Eddie (David Giuntoli) is married to Katherine (Grace Park) who is Asian, and he apologizes to her for not automatically assuming race was the reason for their son being bullied as she did in a previous episode, and another character pushes the false claim that Asians need to be fearful for their lives now, too.

We also find out that Gary (James Roday Rodriguez), who is half-Mexican, is actually named Javier, but because he appears white, he chose to go by the name Gary to fit in better with kids who made fun of his Mexican heritage. He’s thankful that his dad understood why he changed his name. “My dad just wanted to give his half-Mexican son the best shot of making it in a pretty white world,” he says. Gary’s girlfriend makes sure he feels more guilty by pointing out, “You get to choose” to pass for white, while people like his good friend Rome don’t.

Of course, the overall lesson is the same no matter what the show is: white people and police officers = bad. Everyone else = good/victims of white people. What we really should be marching against is this kind of fear mongering, hateful division and blatant lying if we’re all to have any hope of living in peace and harmony together.

Conservatives Fight Back! This episode was sponsored by Ford, and Geico. Click each advertiser for their contact information so that you can let them know how you feel about this episode!