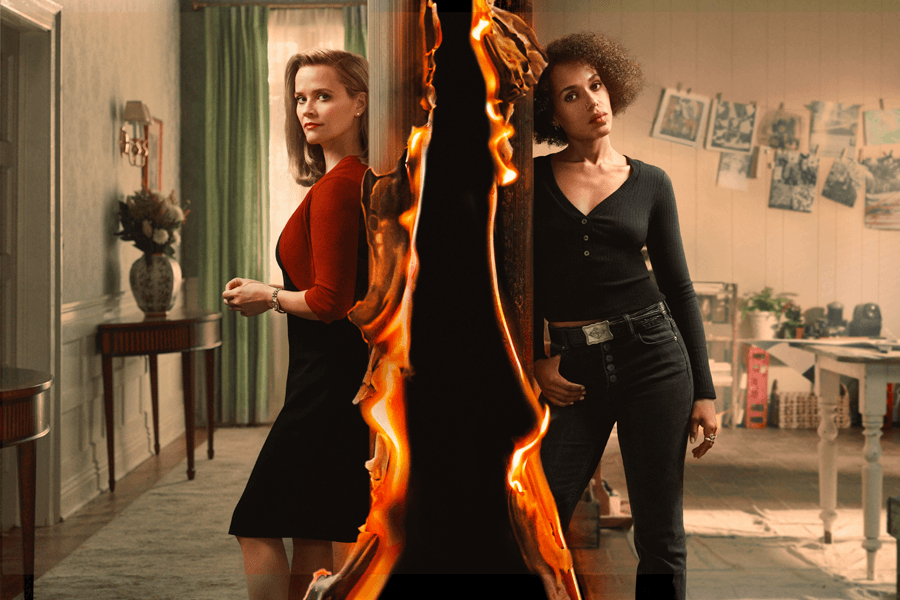 We’ve now been shown just five episodes of Hulu’s show Little Fires Everywhere and there has already been plenty of liberal lecturing so far. But the Kerry Washington/Reese Witherspoon-produced drama isn’t done lecturing yet. On Wednesday’s sixth episode, “The Uncanny,” there were jabs at President Ronald Reagan, Christians, and motherhood.

The episode focused on the earlier lives of main characters Mia (Tiffany Boone) and Elena (AnnaSophia Robb). In one scene, as young Mia sat at the dinner table with her family, her parents (who are portrayed as overly-zealous and overly-protective Christians) said a prayer, during which Mia’s mother Regina (Melanie Nicholls-King) makes it very clear that she was extremely worried about Mia going to art school in New York City.

“Protect Mia, sweet Jesus, in that Big Apple of sin,” her mother said while Mia and her brother Warren (Aubrey Joseph) shared exasperated looks and eye rolls. Warren later told Mia that their mother asked the entire deacon board at their church to pray that Mia, “doesn’t come back a hooker. Or worse, a lesbian.”

Of course, Mia ended up having a lesbian affair with her art instructor Pauline (Anika Noni Rose) later in the episode, even though their relationship was platonic in the book that inspired the show. Interestingly, in a poll from Oprahmag.com at the time of this writing, 67% of readers/viewers said they “preferred the book’s platonic relationship,” while only 33% said they were “all for (the lesbian affair)!”

When Mia receives a letter from her art school well into her first year notifying her that her scholarship has been rescinded due to budget cuts, Mia is understandably upset, and the blame gets put on then-President Ronald Reagan:

Warren: I don’t know, Mi. Mom and Dad will be back from church soon.

Mia: They’ll just tell me to go to a real school so I can get a real job.

Mia ended up becoming a surrogate for a couple, Joe (Jesse Williams) and Maddie Ryan (Nicole Behari), and she insists on being compensated $12,000 so she can pay for school, which the couple eagerly agreed to pay. When Warren found out, he expresses concern about Mia’s decision to give her baby up to the couple.

Pauline interrupted Warren and denigrated motherhood: “Do you realize that your sister is one of the most talented artists I’ve ever met? Anyone can be a mother. Few can do what your sister does. In fact, no one can.”

After Warren passed away later in the episode, Regina didn’t want Mia to come to his funeral because her pregnancy would “raise a lot of questions” when the day should be about “honoring Warren.” Mia ended up leaving a letter for the Ryans claiming she had a miscarriage, and she takes off in Warren’s car, still very pregnant.

Meanwhile, we also got a glimpse of Elena’s life as a young mother. Just when she’s back at work after having her third child, she found out she’s pregnant with her fourth and she’s not happy about it in the least, as a conversation with her mother Caroline (Jessica Tuck) made very clear:

Elena: Mom? I’m so sorry about the sitter!

Caroline: It’s fine. I canceled bridge. Moody here just cried himself to sleep. And those other two? Do you even discipline them? Oh, this place. It’s a disaster. I don’t know why you’d rather live in a shoebox than a beautiful family home.

Elena: I’m pregnant again. I, I just got back and-and now I’m being derailed again. And fucking Sandra got promoted to editor. Sandra.

Caroline: Sweetheart, I mean, it’s impressive that you’ve worked for as long as you have. This obsession that your generation has. It is okay to just be a woman and let men be men.

Elena: You don’t know what it means to love your work.

Caroline: This paper that you’re working for, no one even reads it. And Bill told me that your job barely even pays for your help.

Caroline: You should be trying to make things easier on yourself.

Elena: Things would be easier without another baby.

Caroline: I mean, you’re acting as if it’s a choice.

Elena: It is. We’ve held up signs that said so.

Caroline: You have money and resources, and there is no reason that you can’t have another baby.

Elena: Is not wanting another one a reason?

With just two more episodes left, at least the end is near! But with such a clear agenda on the writers’ minds, I’m afraid to see what leftist propaganda will be shoved into those last episodes.