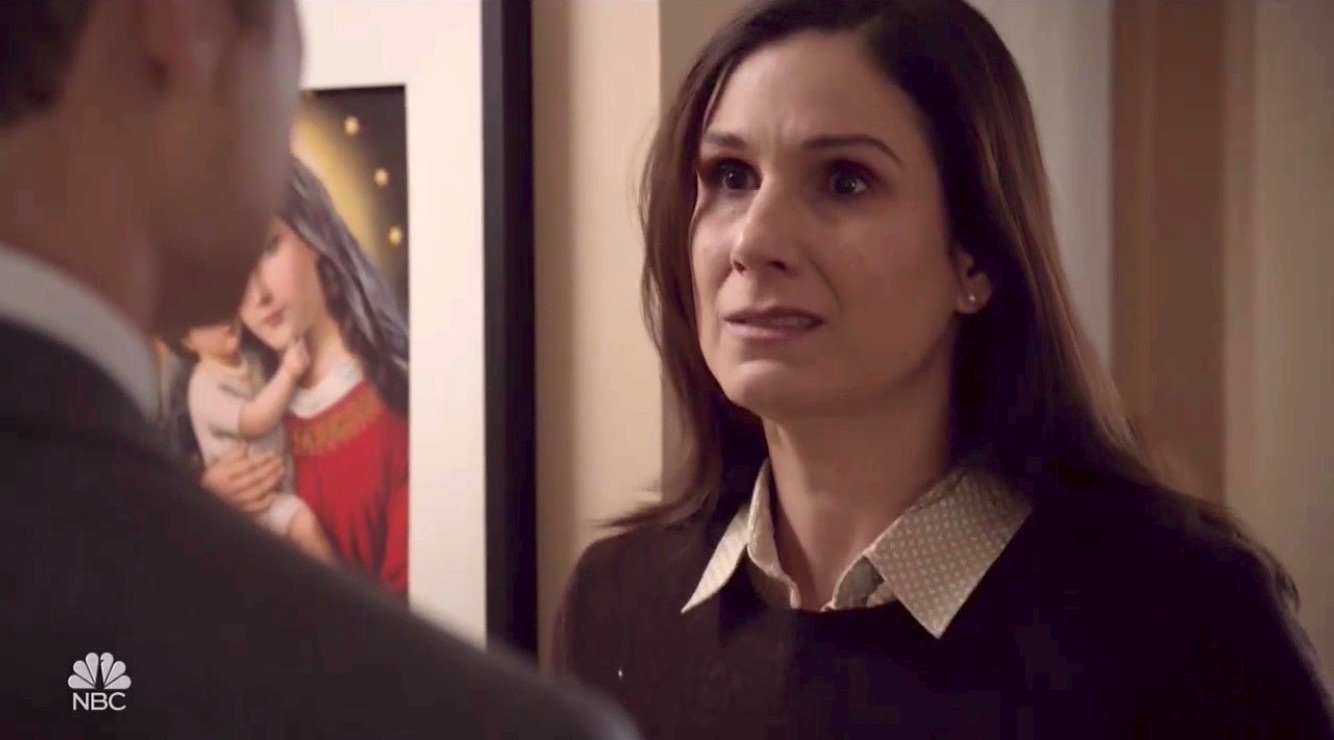 It may be cliché to say, but in the case of NBC’s high-school drama Rise, it’s true: Just when you think things couldn’t get any worse, Rise hits a new low.

But Tuesday’s episode, “The Petition” was one of the worst episodes so far this season, as it is heavily implied that Catholic father Robert, who opposes the controversial school play and his son's role as a gay character, is really just “afraid” of the play because Robert is secretly gay himself.

The episode opens with theater teacher Mr. Lou Mazzuchelli (Josh Radnor) or “Mr. Mazzu” and assistant Ms. Tracey Wolfe (Rosie Perez) viewing a risqué video promoting the school play, complete with students sensually caressing themselves, making out and undressing. Being the mature adults in a position of authority who are supposed to protect their students, Mr. Mazzu and Ms. Wolfe naturally decide to pretend they never saw the video because it’s helping ticket sales for the play to skyrocket.

Thankfully the principal, the PTA and even Mr. Mazzu’s wife Gail (Marley Shelton) respond as most adults would and are upset and shocked over the video. Principal Ward (Stanley Mathis) threatens to stop the play and demands the video be taken down, the PTA starts a petition to have the play stopped, and even Gail proclaims that their daughter will not be seeing the play.

Mr. Mazzu tells PTA president Nancy (Leslie Meisel), “Look, that video was completely unauthorized and misleading.” She responds, “Well, maybe so, but now everyone's read the play. Masturbations, onstage sexual acts, S&M, sexual abuse. People bring their kids to these plays…The PTA is unified. We're not gonna let that show go up. Not if we can help it. I mean, honestly, what were you thinking?”

Simon’s father Robert (Stephen Plunkett) confronts Mr. Mazzu after seeing the video and says, “Mr. Mazzuchelli, maybe you think you're making art, being provocative. But you're hurting these kids. You're hurting my son.” Robert then vows to do everything in his power to stop Mr. Mazzu and signs both his and his wife Patricia’s (Stephanie J. Block) names to the PTA petition against the play, which infuriates Patricia.

Although she had been on her husband’s side in the beginning of the series, Patricia has since been “enlightened” by Mr. Mazzu and has been slowly turning against her husband, leaving him as the sole parent fighting to protect his son from the play’s themes that are antithetical to their Catholic faith. Patricia challenges Robert, asking him why he is "afraid" of the play and accusing him of "hiding behind religion and God and morality to stop Simon from being who he is" (Simon has been repressing his attraction to his male castmate.)

And we can’t have that in liberal Hollywood, can we? If you’re a Christian who believes homosexuality is a sin, it can’t be because of your faith. It must be because you’re secretly gay yourself:

Patricia: Robert, how dare you put my name on that.

Robert: I didn't realize I needed your permission to stand up for our basic beliefs.

Patricia: Well, do you realize what this does to our son having our name on there? It is a total betrayal.

Robert: This is protecting our son. This is standing up for what we believe.

Patricia: No, this is you. You hiding behind religion and God and morality to stop Simon from being who he is.

Robert: Who is he? What do you mean?

Patricia: No. No. No, this isn't about him. This is about us. And our marriage. How dare you fake that signing that represents me. How could you possibly know that little of your—

Robert: Our marriage is fine.

The show also continued pregnant teen Sasha’s (Erin Kommor) storyline, as she and her newly transgender best friend “Michael” (Ellie Desautels) visit a clinic and see Sasha’s 9-week old unborn child for the first time on a sonogram, which shocks Sasha and brings her to happy tears.

Later when Sasha and Michael look at the sonogram photo in Sasha’s bedroom, Sasha asks Michael to be the godparent, clearly indicating that she has decided to keep the baby. But Michael is worried and tells Sasha, “I don't want to tell you what to do at all. At all. But you have school. And you're this amazing actress and songwriter and just this artist. I admire you so much. How is it going to work? I mean... It's amazing. But don't let a picture cloud your decision-making.”

Sasha has a perfect reply, but Michael is obviously still not thrilled that she wants to keep her baby:

Sasha: Look at me. Look at my dad. I know Travis is a major jerk I never should've gotten involved with. But maybe things happen for a reason. Maybe this is my chance to build a family of my own. Have something that matters. I don't know what's right or wrong. I know it won't be easy. All I know is how I feel. It's not just a picture. It's mine.

Well, they showed the humanity of the unborn child through a sonogram but stopped just short of saying the full truth. That it’s not just a picture. It’s her baby. In fact, they seem to go out of their way to not use the word "baby" to describe her baby.

Michael ends up enlisting the help of Ms. Wolfe to talk to Sasha because he’s still concerned about her decision and Ms. Wolfe shares that she faced a teen pregnancy as well and gave her baby girl up for adoption. She promises to support Sasha and be with her every step of the way, but only time will tell if that means Sasha chooses life or ends up aborting her baby.

Given the record of this show, I’m afraid it will most likely be the latter.