The Top 5 Worst Pro-Abortion TV Scenes of the Year 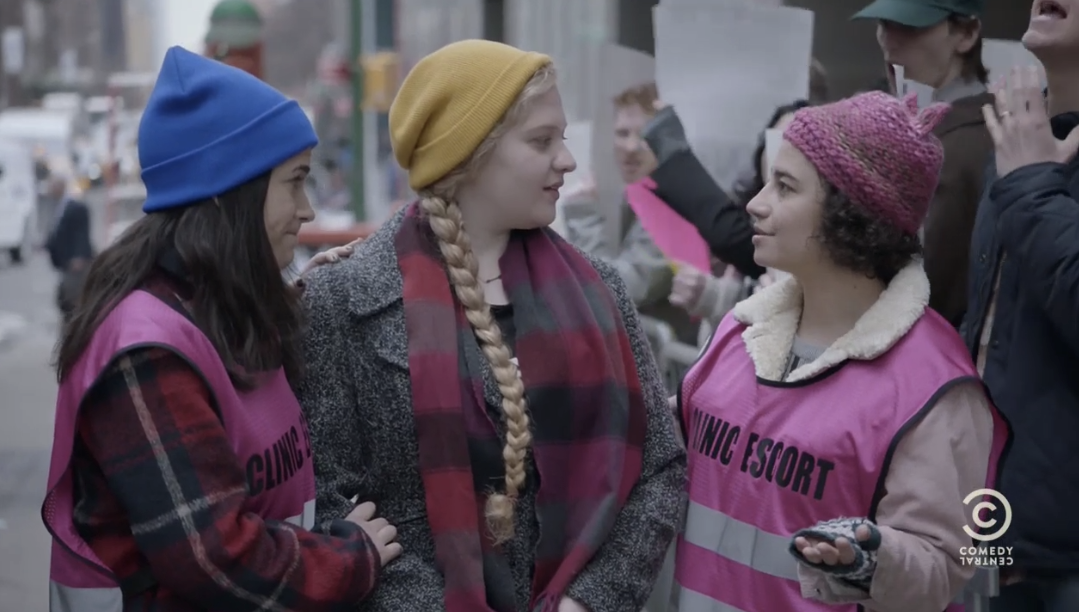 Forty-five years ago, on January 22, 1973, the Supreme Court handed down the infamous Roe v. Wade decision that made abortion on demand the law of the land. Sixty million abortions later, we are still battling over the disastrous ruling, in court and in the culture wars.

How abortion is depicted in our culture matters – at least, that’s according to pro-abortion activists. There is perhaps no cause Hollywood loves more than Planned Parenthood and abortion and they bring their advocacy to the small screen. In the last year, no fewer than 20 television shows featured an abortion-related plot line.

From a pro-choice Jesus to celebrating abortion with ice cream, here are the 5 worst scenes of the year.

Hulu’s I Love You, America with Sarah Silverman

In the final episode of the first season of Hulu's I Love You, America, there's a sketch of Sarah Silverman meeting up with Jesus Christ (played by Fred Armisen) at a sandwich shop. The joke, if you can call it that, is that this Jesus is a House-watching, Wayne’s World fan with mostly liberal opinions.

Sarah asks His opinion on abortion and lo and behold, Jesus is pro-choice!

"I'm against it," He says. "But that's just me. I'm also against the squishing of the tiniest bug, so whether or not you squash a bug or kill an animal, or have an abortion, that's up to the individual."

Squish a bug, stop a tiny unborn human's beating heart, no biggie, it's up to the individual!

In the final episode, “3.6,” of Catastrophe on Amazon Prime, the show closes how it began…devaluing human life. Rob’s friend Dave (Daniel Lapaine), who found out his girlfriend Catherine (Amanda Hale) is pregnant much to his dismay, calls to say that he “might have made a mistake."

"I offered Catherine money not to have the baby," he explains, "I want the baby to be happy so I thought the best way to do that would be for it not to be born.” Yup, that's pro-choice logic, alright!

The September 20 episode of Comedy Central’s Broad City, titled “Twaining Day,” had main characters Ilana (Ilana Glazer) and Abbi (Abbi Jacobson) don clinic escort vests and casually chat about haircuts while walking a young woman past a crowd of pro-life protesters outside an abortion clinic. Ilana tells the girl, “You are a strong queen. Your body, your choice - it's simple,” as she is led to the front door.

The angry, shouting protesters are holding absurd signs that say things like, "Aborted babies are the number one spotted ghosts at haunted locations in America" and "Jesus Hates You." As the two women turn and walk back down the sidewalk, Ilana takes a toke of her joint and blows the smoke into a male protester’s face. She tells him, “You don’t know how much you need that.” Mimicking her, Abbi does the same to a protester on her side of the sidewalk and says, “You need to chill!”

In the 8th episode, of Netflix's GLOW, Ruth Wilder (Alison Brie) asks her director, Sam Sylvia (Marc Maron), to accompany her to the abortion clinic. Sam jokes around the entire time, but the one time Sam becomes serious is when he checks with Ruth that “this is what you want.”

But then she starts joking, too. “Don’t come back without donuts,” she reminds him when her name is called within minutes. “In Soviet Union, abortion is the only thing there’s no line for,” she says with a Russian accent.

As the abortion begins, any hint of laughter is gone as the camera focuses on Ruth’s face with a pained expression staring at a ceiling tile painted with the sky and clouds.

In episode 8 of the third season of Degrassi: Next Class, titled “#IRegretNothing,” 16-year-old Lola Pacini (Amanda Arcuri) wonders why she doesn’t feel sad about her abortion. Her friend Yael tells her, “A lot of women have abortions and feel no shame,” citing Nicki Minaj as one celebrity who had an abortion in high school – left out is the crucial fact that Minaj said the abortion “haunted me all my life.” This convinces Lola to make a video declaring she’s not ashamed of her abortion, neatly adhering to the trendy feminist movement to “destigmatize” and #ShoutYourAbortion.

After watching Lola’s online video, her friends say they don’t know what they’d personally do in that situation but one gushes, “Making that difficult choice and standing up for it? You’re courageous! We should go out and celebrate!”

Miles (the father of Lola’s aborted baby) walks by and asks where they’re headed. “To celebrate Lola’s bravery!” they proudly declare. Miles jokes, “Did she save a cat from a tree?” No, nothing so noble - she killed the unborn baby you didn’t know existed and then shared the story of her abortion online without telling you first. And then they're off for ice cream!

Despite these awful scenes there's still some reason for hope. There were some powerful truths about the pain of abortion and miracle of life that were revealed as well.

The ABC drama Somewhere Between showed that the choice to abort is not always made freely by the woman and the trauma it can bring. Even the liberal Hulu show Casual said, "Nobody wants to have an abortion, it's physical and psychological agony." On Netflix’s The Ranch, life is chosen for an unplanned pregnancy and on ABC’s The Good Doctor abortion is rejected for a sick unborn child.