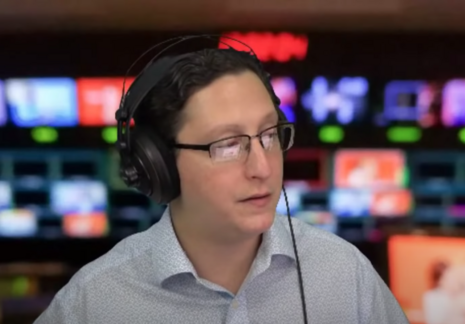 CNBC’s recent All-America Economic Survey of 1,000 people claimed that Biden’s leftist agenda won him a whopping 62 percent initial approval rating for his “handling of the economy and for uniting the country.” The result supposedly topped the “first ratings of the last four presidents.” In addition, Biden’s initial rating was “18 points higher than Trump’s.” Baris summed up Biden’s numbers in one sentence: “At this point, there’s no excuse for them to continue to release results derived from methodologies that have repeatedly proven to be flawed.”

When reached for comment, Baris told the MRC the accuracy of polling companies could be measured by the reliability of their predictions leading up to the tumultuous 2020 election:

The only real test of a pollster's accuracy and trustworthiness comes on Election Day. It’s important to remember that these pollsters failed miserably last November. There are several reasons for that failure, all of which are now pretty widely acknowledged in the industry.

Baris pointed to two reasons why CNBC and others are making serious mistakes that completely misrepresent the leanings of the American people. First, “from CNBC to Reuters to Morning Consult, these are opt-in panel polls, most of which are consumer file-sourced panels,” Baris said. “[There are worsening biases in these panels that skew toward a more pro-metro, high interest respondents.” Baris said that he had discussions with his company’s various vendors on the change in panel demographics and concluded that “we're fairly confident that Covid lockdowns played a significant role in the shift in panel participation.”

Baris specifically pointed out how “Zoomers — comprised more of a professional class than previous available respondents — have a lot more time on their hands.”

Secondly, Baris accused pollsters like CNBC of “ignoring textbook response bias even after the election conclusively proved both response and social desirability biases are getting worse.” 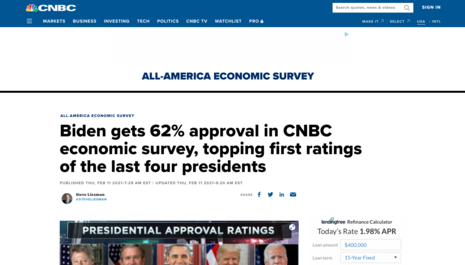 We strongly favor larger samples and quotas for demographic groups to ensure everyone is adequately represented, to include oversampling certain harder-to-reach groups. They do not, and as a result are over-representing the Bill Kristol-like Republican in metro areas. They are easier to reach, quicker to respond and more likely to participate juxtaposed to more Republican-leaning voters in non-metro suburbs and rural areas. These more GOP-friendly voters are becoming increasingly skeptical of pollsters, [emphasis added].

Baris concluded that “outside of a transcendent figure such as Barack Obama circa 2009, this country is simply far too polarized for a new president [Biden] to reach 60 percent approval, let alone exceed it." Baris said that "[s]imply because larger percentages of Republican-leaning voters in certain geographic areas are harder to reach, doesn’t mean they’re no longer in their electorate.”

Conservatives are under attack. Contact CNBC at 201-735-2622 and demand they stop misrepresenting the electorate to the American people.