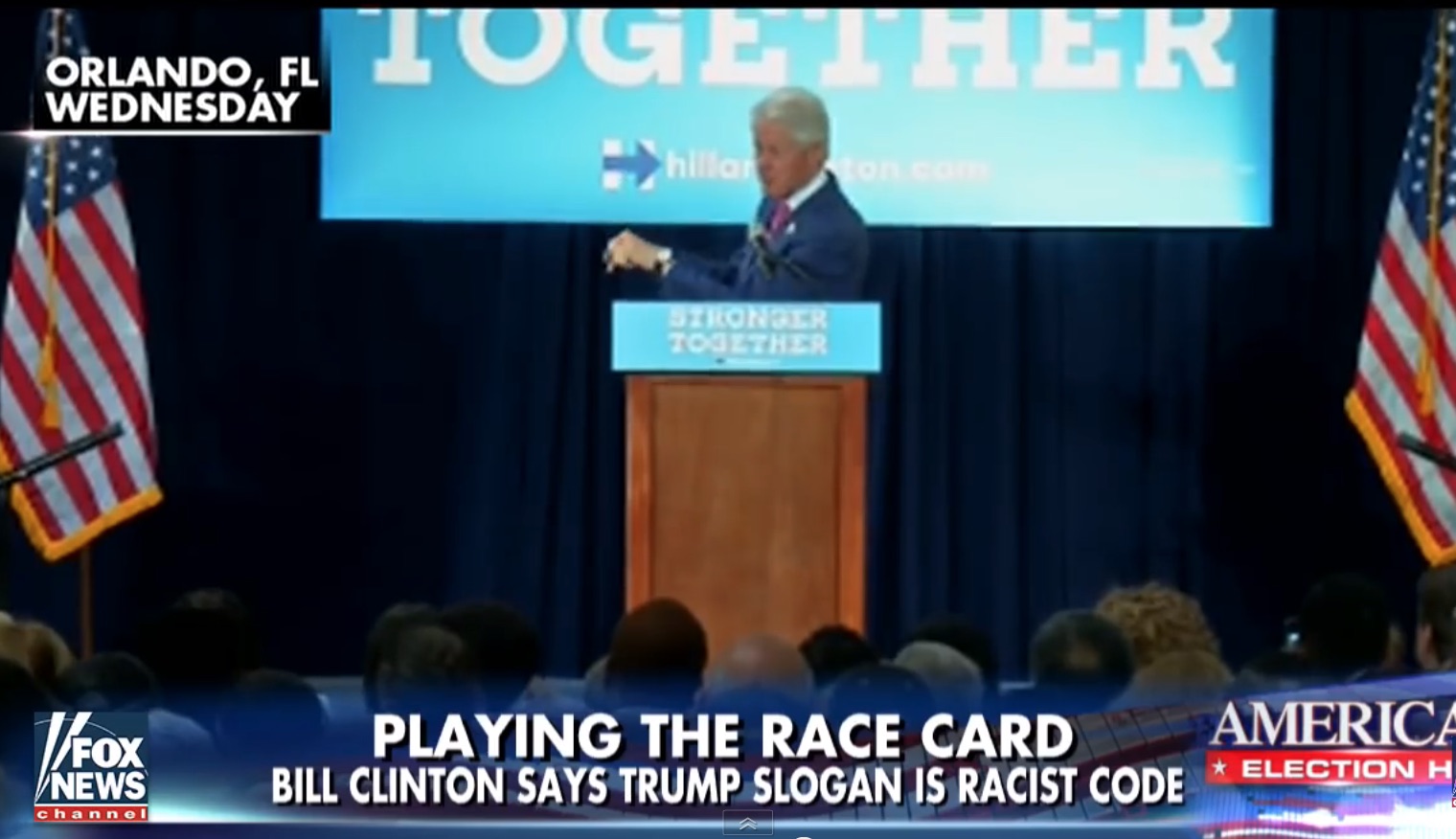 Apparently just arriving after over a year spent in a virtually news-free, hermetically sealed cave, New York Times reporter Matt Flegenheimer pretended that former President Bill Clinton has, until he recently began complaining about the treatment of the Clinton Foundation, had "more than a year of uncharacteristic restraint."

In the real world the rest of us inhabit, Clinton has benefited from over a year of the establishment press downplaying or ignoring his angry responses to challenges and his elitist statements, including his two most recent gaffes: a sneering reference to "coal people" and a claim that the Donald Trump campaign's "Make America Great Again" slogan is racist. The national press's consistent disinterest in reporting his remarks explains how the Times reporter can write what he did with a straight face.

Here are excerpts from Flegenheimer's flight of fancy (bolds are mine throughout this post):

Bill Clinton, After a Year of Restraint, Unleashes an Impassioned Self-Defense

For Mr. Clinton and his extended circle, this election has at times felt like a campaign devised to discredit the former president and call him names.

And after more than a year of uncharacteristic restraint — a notable shift from eight years ago, when his simmering instincts often burdened Hillary Clinton’s first presidential run — Mr. Clinton seems to have had enough.

“Did I solve every problem? No,” he told a crowd on Wednesday in Orlando, Fla. “Did I get caught trying? You bet.”

In the Democratic primary race, he mostly held his tongue as Senator Bernie Sanders disavowed his administration’s approach to trade, criminal justice, gay rights and the deregulation of Wall Street, in part because Mrs. Clinton had been compelled to second-guess much of his record herself.

Yet if the primary race doubled as a re-litigation of Mr. Clinton’s policies, which his advisers believe history will judge kindly, the general election has touched a different nerve, taking a black light to Mr. Clinton’s post-presidential legacy.

“His reputation has suffered some since he left the presidency,” said David Gergen, a senior adviser to several presidents, including Mr. Clinton. “There’s no desire on the part of Bill Clinton and his followers to make him the center of the campaign. They want to make Hillary the center of the campaign. So he’s had to take some things. He’s had to fight with one hand tied behind his back.”

... But the focus on the Clinton Foundation, which has come under escalating scrutiny over potential conflicts of interest and foreign donations, has rankled him far more, according to those close to the former president, because of his deep personal investment in the foundation’s charitable work over the past 15 years.

In a series of swing-state appearances this week, Mr. Clinton unleashed an impassioned self-defense, by turns sarcastic and almost pleading.

... the Clintons and many in their orbit have long believed they are held to a double standard on questions of transparency, and friends say they consider the tumult surrounding the family foundation to be among the most egregious examples.

Let's deal with the bolded items above in the order they appear.

Working in reverse order and only looking at the past six months, here is only a portion of Bill Clinton's record during his supposed "year of uncharacteristic restraint."

On Friday, hours before Flegenheimer's work was published that evening, Clinton, speaking in Homewood, Pennsylvania, mocked "the coal people" in West Virginia and Eastern Kentucky who are supporting Trump (HT Daily Caller):

We all know how her opponent's done well down in West Virginia and eastern Kentucky, because the coal people don’t like any of us [Democrats] anymore. They all voted for me. I won twice, and they did well.

And they blame the president when the sun doesn’t come up in the morning now.

Well sir, they also correctly "blame the president" for his "war on coal," and they blame your wife specifically for saying in May that "We're going to put a lot of coal miners and coal companies out of business." This after coal miners, particularly unionized coal miners, gave the Democratic Party many decades of virtually lockstep support. It's so bad for national Democrats in West Virginia that the Mountain State's Democratic candidate for governor has publicly announced that he will not vote for Hillary Clinton in November.

Bill Clinton seems not to realize that Pennsylvania and Ohio, both of which are key battleground states, still have thousands of miners working in the coal industry (much smaller now, mostly thanks to the aforementioned war on coal). There are also thousands of former coal workers, their families, their suppliers, and their devastated communities, all of whom would likely be quite motivated to turn out in large numbers at the polls and vote for someone besides his wife if they are made aware of the former president's obvious contempt for them. This would explain why the press, including the Times, has ignored what Bill Clinton said on the topic on Friday.

“That message––I’ll give you America great again––If you’re a white southerner,” Clinton said, “you know exactly what it means, don’t you? It means I’ll give you the economy you had 50 years ago and I’ll move you back up the social totem pole and other people down.”

The problem is that Clinton used the phrase "Make America Great Again" several times to promote his presidential candidacy in 1991 and 1992, and also to promote his wife's run against "person of color" Barack Obama in 2008.

Establishment press coverage of this huge Bill Clinton gaffe has been minimal.

In an incident that was widely perceived as an attempt to game the system and get his wife off the hook for classified information-mishandling crimes she committed while she was Secretary of State, Bill Clinton, while on the tarmac at Phoenix's airport, tracked down Attorney General Loretta Lynch, the person ultimately responsible for the decision as to whether Mrs. Clinton should be prosecuted, and met with her for what is said to have been "roughly 20 minutes." What they really discussed has never been revealed.

Flegenheimer did mention this in one paragraph in his Times piece as "an exception" — in Paragraph 23, that is.

In mid-May, the Politico cited incidents from that month and the previous month where Bill Clinton got into it with hecklers and skeptics over the 1994 crime bill:

... (in May) he was quick to engage with a lone heckler who interrupted his speech, defending the positive aspects of the crime bill’s legacy while noting that he apologized last year for sentencing laws that were “way overdone.”

“You don’t have anybody you can vote for who didn’t have anything to do with this,” he said with a note of amusement, pointing out that Sanders voted for the bill. “Nobody’s right all the time.”

His reaction was more measured than last April, when Clinton spent 10 minutes sparring with protesters from the stage in Philadelphia, waving his finger angrily at naysayers who held up signs accusing him of destroying African-American communities.

Recall that Clinton signed the crime bill in September 1994, before that year's "Gingrich Revolution" election, i.e., while Democrats still controlled both Houses of Congress. A Washington Post reporter described the bill's signing ceremony as "awash in election-year politics." In other words, Democrats already saw the GOP tidal wave coming, and cynically used the crime bill to try to push it back.

Also in May, Bill Clinton "said ... during a speech in New Jersey in support of wife Hillary's presidential campaign that although the two eastern European countries 'would not be free' without the efforts of the U.S., they had decided 'democracy is too much trouble" and "want (Russian President Vladimir) Putin-like leadership.'"

Well, that's an improvement over the far left's ridiculous claim that the old Soviet Union would have collapsed of it own weight — which of course, fails to explain how far poorer North Korea and Cuba have remained totalitarian communist states during the subsequent quarter-century. But the fact is that Poland and Hungary would not be free if it weren't for the steadfast persistence of then-world leaders Ronald Reagan in the U.S. (while strongly opposed by Democrats at almost every turn), Margaret Thatcher in Great Britain, and Poland native Pope John Paul II, now St. John Paul II. The "authoritarian" accusations currently being lobbed at these two countries largely relate to their resistance to open-ended acceptance of all Middle Eastern refugees — a position held by most native Europeans in other EU countries, but sadly not by their governments.

None of Mrs. Clinton's opportunistic "second-guessing" would have occurred without the insurgent success of the Bernie Sanders campaign and the high visibility of (and the mostly free pass the press has given to) the Black Lives Matter movement.

In June of last year, Mrs. Clinton was sharply criticized for supposedly giving aid and comfort to racists for having the nerve to say "All lives matter" in a St. Louis-area church. She quickly caved, and as far as can be determined, has not uttered those three words in succession since, basically signaling that she would bend to violent BLM movement's will to the extent necessary to fend off any challengers.

It's also quite clear that Mrs. Clinton wouldn't have gotten anywhere near her criticisms of the 1994 crime bill unless BLM activists had pushed her.

In other words, like so many things with Mrs. Clinton, her positions are what they need to be to win, and have no permanence, and are not backed with genuine conviction.

This could be a comprehensive research study all by itself. Luckily, someone has done that, and his assessment, with full details being released gradually, is extraordinarily damning:

... Charles Ortel (is) a Wall Street analyst who uncovered financial discrepancies at General Electric before its stock crashed in 2008, and whom the Sunday Times of London described as "one of the finest analysts of financial statements on the planet" in a 2009 story detailing the troubles at AIG. Having moved on beyond simple corporate fraud, Ortel spent the past year and a half digging into something more relevant to the current US situation: "charities", and specifically the Clinton Foundation’s public records, federal and state-level tax filings, and donor disclosures.

Four months ago, Ortel began releasing his preliminary findings in the first of a series of up to 40 planned reports on his website. His allegation was simple: “this is a charity fraud.”

To learn more about the Clinton Foundation, Ortel decided to "take it apart and see how it worked" and he has been doing that ever since February 2015.

... (Ortel describes the Foundation as) "a case study in international charity fraud, of mammoth proportions."

Yes, there is a double standard. As former Senator Scott Brown said on Fox News Friday when discussing Bill Clinton's "Make America Great Again" hypocrisy: "It's two sets of rules, one for the Clintons, and one for everybody else."

As seen in the FBI's and DOJ's failure to prosecute Mrs. Clinton for her private server-, classified information- and email-related crimes, there are even  two sets of laws, one for the Clintons, and one for everybody else.

And of course, as Matt Flegenheimer aptly demonstrated at the New York Times on Friday, there are two forms of press coverage, one for the Clintons and others on the left, and one for everybody else.