A police officer who was suspended after being photographed praying outside of an abortion clinic, has finally been reinstated by the Louisville Metro Police Department (LMPD). 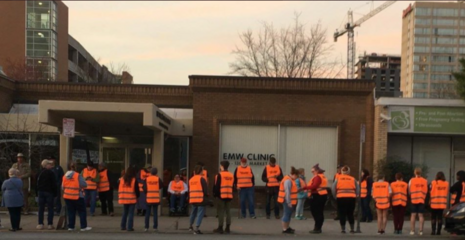 The officer, whose identity has not been revealed, was seen praying outside the EMW Women’s Surgical Center, the only abortion clinic in the state of Kentucky. He was joined by his father to pray the rosary in the early morning on February 20, 6am to be exact. While there, he held a “40 Days for Life” sign, dressed in his uniform and wearing a jacket. His cop car was parked nearby. It is important to note that the officer was off-duty at this point in time.

The officer’s morning prayer did not please those present, as one of the abortion clinic’s volunteer escorts photographed him along with his cop car in an attempt to attract negative attention. The Louisville Clinic Escorts Twitter account tweeted a series of photos of him from the site, calling for the attention of the LMPD.

This group of radical pro-abortion individuals who assist in escorting women and their unborn babies to the slaughter house, intended to punish this officer for what they considered to be an inappropriate endorsement by police of anti-abortion sentiment. Another twitter user by the name of Jecorey Arthur, retweeted the original post, stating, “I just sent this to Police Chief Erika Shields. Maybe this is why LMPD doesn’t enforce the law at these protests. They’re protesting too.” By “protesting,” he is referring to the pious individuals who quietly pray and stand vigil outside the abortion clinic at all hours.

What followed was a horrible mismanagement on the part of the Louisville Metro Police Department. The unnamed officer was immediately suspended from making any arrests, from participating in any cases, from working overtime hours, and any other police duties. This suspension lasted for a total of 4 months while an investigation was held. The LMPD released a statement shortly after, “It is essential that we maintain a posture of neutrality while representing the department and behavior contrary to this will not be tolerated.”

As a father responsible for both his wife and four young children, this treatment was detrimental and resulted in a substantial loss of income. During this time, the LMPD issued to him “notices of potential violations of their Standard Operating Procedures and a Kentucky statute.” Apparently, praying off-duty is grounds for such harsh punishment.

Fortunately, the good officer was offered legal representation by attorneys with the Thomas More Society, a “not-for-profit, national public interest law firm dedicated to restoring respect in law for life, family, and religious liberty.” Lawyer Matt Heffron, defended the officer saying, “It is astounding to those of us defending him - shocking, actually - that the police department would treat a hardworking, loyal officer this way. They left him twisting in the wind for four months because of off-duty prayer,” and after having “prayed alone with his father for less than an hour.”

He added, “None of the officer’s off-duty prayer was covered by the LMPD allegations, and any formal punishment, under these circumstances, would violate his First Amendment rights.”

The Thomas More Society’s pro bono legal services aided in the ultimate reinstatement of the officer, after pressing that he be allowed to return as soon as possible since March. Fortunately, the officer will not be disciplined, though he already suffered unjustly for his pro-life witness. An open-records request to the LMPD was submitted to determine whether or not there were “similar disciplinary actions against off-duty, uniformed officers who marched in Black Lives Matter protest or participated on LGBT Pride rallies.”