Time is everything, especially when it comes to understanding the media’s priorities. At the end of January, there were two marches the same weekend both claiming to stand for women. But the network coverage was anything but similar.

One was for abortion, the other was for life. One claimed larger numbers. But the other boasted a presidential address. And the networks that follow President Trump’s every tweet hardly noticed as, for the first time ever, the president addressed the March for Life live via satellite.

During their morning and evening news shows from Jan. 19 through Jan. 22, the three broadcast networks covered the 2018 Women’s March nearly seven times more than the 2018 March for Life. ABC, CBS and NBC combined devoted 25 minutes, 24 seconds on the Women’s March, but just 3 minutes, 46 seconds on the pro-life rally. 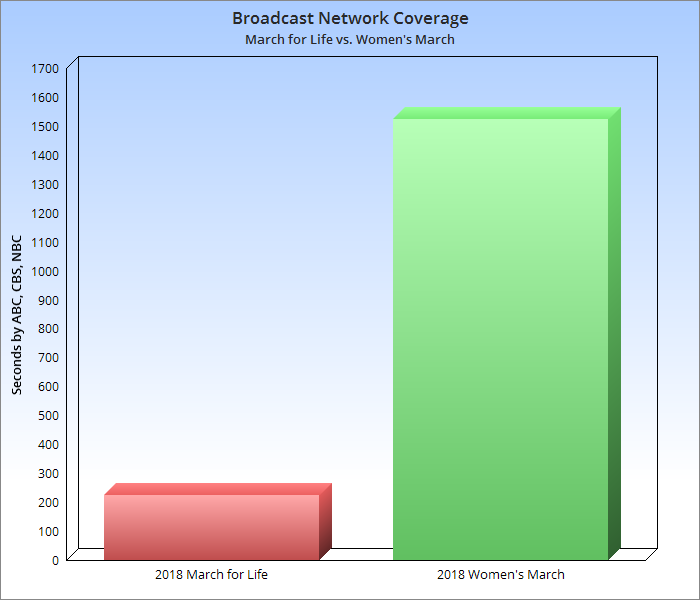 Last year, when Vice President Mike Pence and White House counselor Kellyanne Conway spoke from the March for Life stage, the networks covered the event with 21 minutes, 52 seconds. This year, they did it in less than 4.

The first Women’s March, held the day after President Trump’s inauguration, aimed to mobilize women to tell the new administration that “women’s rights are human rights.” Except, according the march’s pro-abortion platform and its behavior towards pro-life organizations, “women” doesn’t include all women. That became even clearer when organizers removed pro-life group New Wave Feminists from its partner list last year. 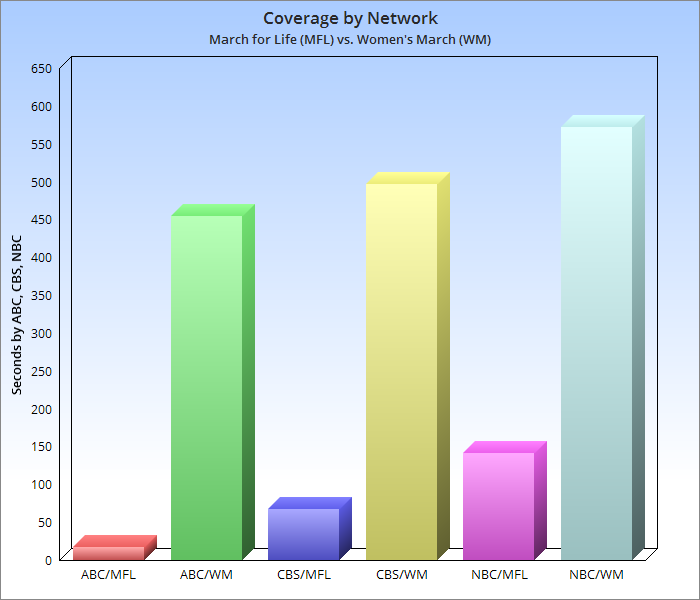 And, when it came to time, the networks prioritized the Women’s March, which boasted America’s largest abortion provider, Planned Parenthood, as a major sponsor.

Before the Women’s March weekend even began, the networks had already dedicated 6 minutes, 49 seconds to it -- more than they gave to the 2018 March for Life total.

“Tomorrow is the year anniversary of that women's March on Washington. This has really been a year of women's power, hasn't it?” he prompted her.

That was just the beginning.

On Jan. 20, CBS This Morning and NBC's Today covered the March for Life as a part of their larger coverage of the Women’s March. CBS reporter Paula Reid admitted that the Women's March “has come under criticism, for only representing the views of liberal women,” before interviewing a woman who attend the pro-life march. For her part, NBC correspondent Morgan Radford noted the “stark contrast” between the Women’s March and the March for Life that was put “putting abortion rights advocates on edge.”

Other reports were glowing. On Jan. 21, ABC correspondent Eva Pilgrim highlighted the “#weekendofwomen” with over 250 marches with “hundreds of thousands packing in” “stretching as far as the eye can see.”

By Monday morning, the coverage hadn’t stopped. For CBS This Morning, co-anchor Norah O’Donnell included a USA Today story on the march in “this morning’s headlines.” And Today co-anchor Hoda Kotb remembered the “powerful scenes in cities all across the country this weekend.” 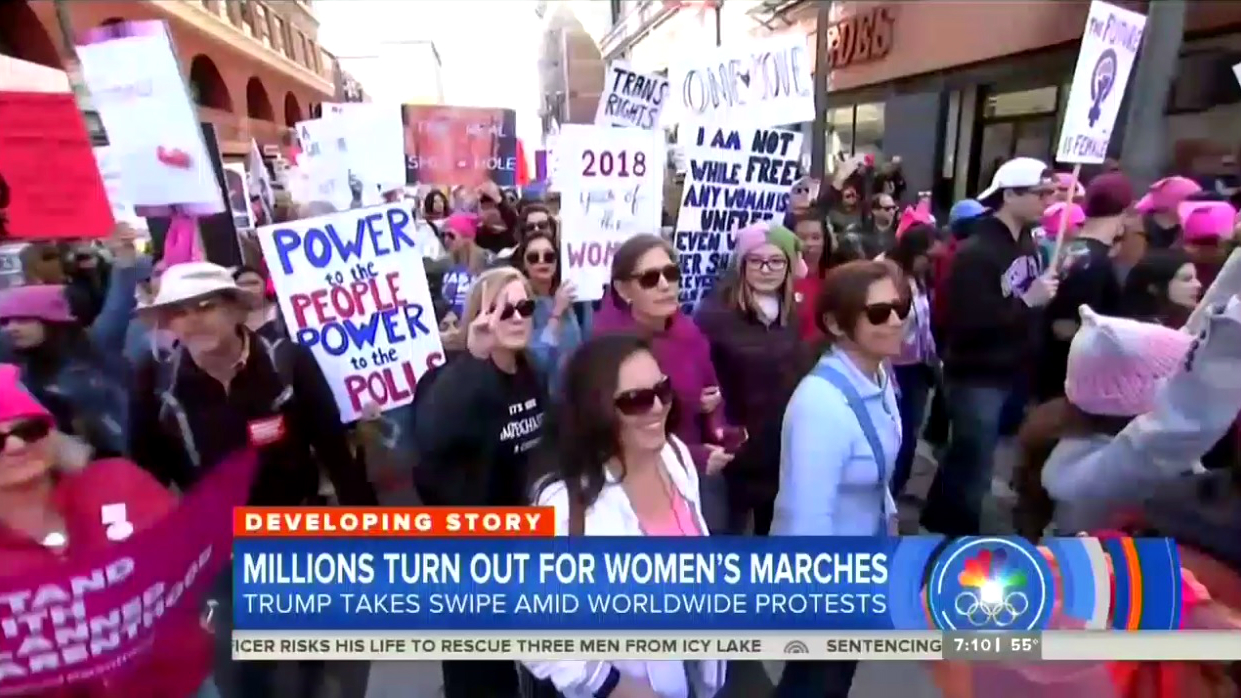 In their March for Life coverage, all three networks described the marchers as “anti-abortion” – not “pro-life.” NBC even aired a photo emphasizing the (very) small group of counter-protesters.

CBS didn’t even cover the event until the next morning, on Saturday, when anchor Alex Wagner announced that “this was the first time a sitting president addressed the rally.” (That was incorrect: both Ronald Reagan, in 1987, and George W. Bush, in 2008, did by phone.)

During their morning and evening news shows for the past five years (2013 – 2017, the broadcast networks have offered fewer than 24 minutes to the March for Life. To put that in perspective, ABC, CBS and NBC spent more than three times that on the Women’s March in 2017 alone, with 1 hour, 15 minutes, 18 seconds.

In 2018, before the main Women’s March event happened Sunday in Las Vegas, the news shows had already covered the Women’s March three times more than the 2018 March for Life. 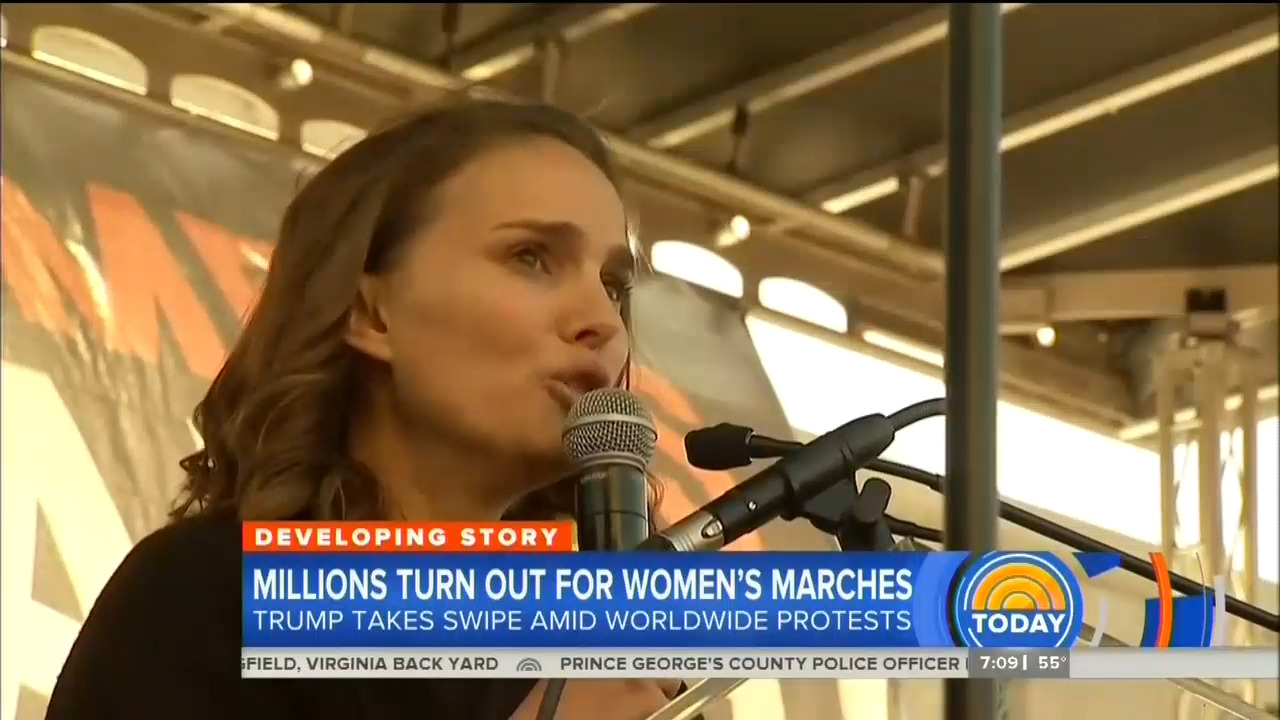 With their evening shows immediately following the 2018 March for Life on Friday, the networks combined spent a mere 2 minutes, 6 seconds on the pro-life rally. Meanwhile, according to MRC Latino, U.S. Spanish-language television news leader Univision only dedicated 20 seconds to the March for Life Friday evening.

Methodology: MRC Culture watched the evening news shows from the three broadcast networks (ABC, CBS and NBC) directly from the morning of January 19, 2018 to the morning of January 22, 2018. MRCC also watched those same evening news shows from ABC and NBC directly following the Women’s March on January 20, 2018. For CBS, MRCC watched the Women’s March Evening News segment online for Jan. 20 and Jan. 21. Teasers to segments were not included in the time tally.