CBS Ignores, ABC, NBC Give Under 3 Minutes to March for Life 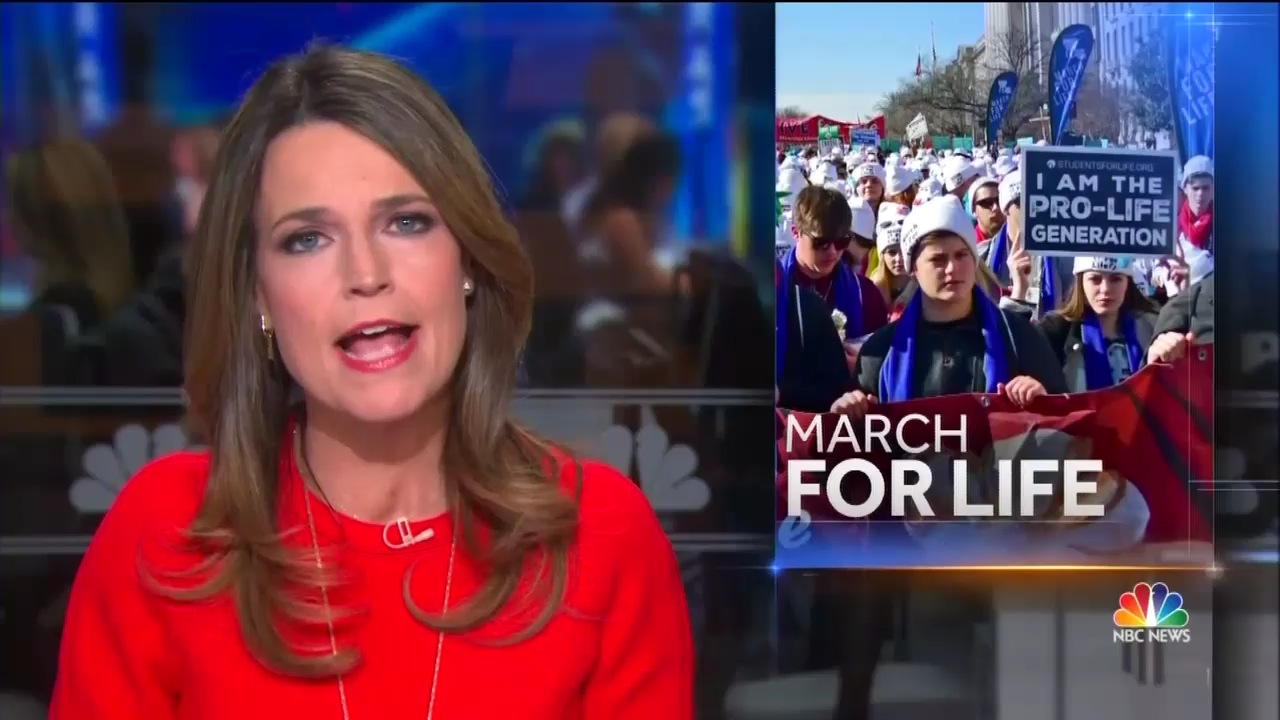 According to organizers, more than 100,000 Americans attended the 45th March for Life on Jan. 19. The rally condemns abortion around the anniversary of the Supreme Court’s 1973 Roe v. Wade decision, which legalized abortion in the U.S. But while the largest annual march in Washington, D.C. regularly attracts crowds from across the country, the networks refuse to give them – and the unborn they march for – the coverage they deserve.

The evening of the March for Life, ABC and NBC gave an embarrassing 2 minutes, 6 seconds combined to the rally. CBS said nothing. This march made history, as the president addressed the March for Life live via satellite. But that wasn’t enough for the media. 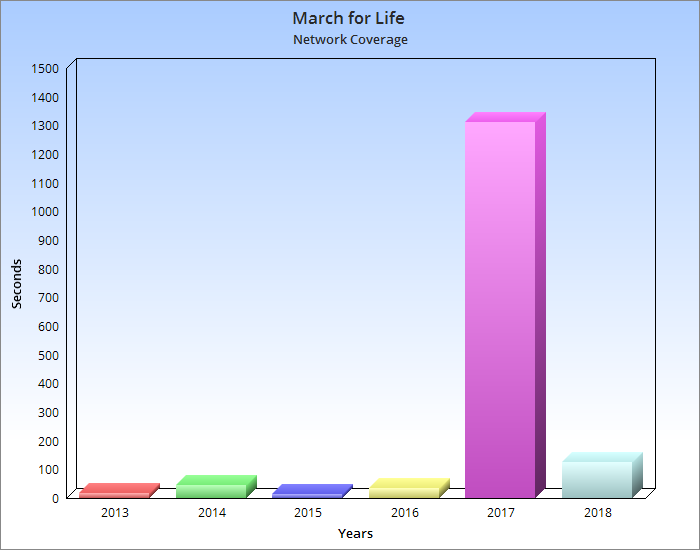 For the 2018 March for Life, the most coverage came from NBC. During Nightly News, fill-in anchor Savannah Guthrie spent 1 minute, 49 seconds on the event. In the president-focused segment, Guthrie noted that President Trump’s comments were historic. Something the other networks did not.

“The president did something today that no other president has done before him,” she said, “He directly addressed a massive crowd of anti-abortion activists at the annual March for Life rally in the nation's capital” via satellite.

While both Guthrie and NBC White House correspondent Kristen Welker called the event by name (“March for Life”), they both repeatedly used the term “anti-abortion” to describe the pro-life marchers.

In the field, Welker reported on the march as a political event by insisting that the movement was “celebrated by marchers energizing his [Trump’s] conservative base.” She interviewed two marchers: one who expressed thanks to the president for supporting life and an adoptive mother who stressed choosing adoption rather than abortion.

But again, Welker turned to politics that “loomed large.”

“Once in the oval office, he's touted some victories for the movement,” she said, before adding he fell short as “other campaign promises have lagged” like defunding Planned Parenthood and limiting late-term abortions.

In an interview, she pressed White House counselor Kellyanne Conway: “Why should anti-abortion supporters feel confident that President Trump is going to get some legislative victories?”

And, of course, she aired a photo of the (very) few abortion supporters protesting the March for Life.

As if there’s such a thing as a “safe abortion,” where one person always dies. But Welker didn’t catch the irony, even after attending the march. Instead, she concluded, “But for those who march today, new momentum.”

But it wasn’t new momentum by the media. Last year, the networks spent 21 minutes 52 seconds on the march. This year’s 2 minutes and 6 seconds doesn’t even come close.

During World News Tonight, ABC anchor David Muir spent a mere 17 seconds on the march. According to him, just “thousands” attended. Like NBC, his report also centered around the President, “addressing the 45th annual March for Life.”

“His remarks were broadcast live from the Rose Garden to thousands of marchers on the Washington mall,” he said. “The president promoting his administration's actions to strengthen abortion restrictions.”

CBS didn’t give the marchers, or the unborn they spoke for, one mention. Instead, Evening News covered topics like giant waves and a 93-year-old widower whose life still revolves around his wife.

During their morning and evening news shows for the past five years, the broadcast networks have offered fewer than 24 minutes to the March for Life. To put that in perspective, ABC, CBS and NBC spent more than three times that on the Women’s March in 2017 alone, with 1 hour, 15 minutes, 18 seconds.

But that’s not all that makes this year’s march especially relevant. Also on Friday, the U.S. House of Representatives passed the Born-Alive Abortion Survivors Protection Act in defense of abortion survivors. This summer, the Supreme Court will hear oral arguments concerning a case on abortion and free speech in National Institute of Family and Life Advocates v. Becerra.

UPDATE: This post has been updated to include numbers from MRC Latino.