For the first time in history, the president is addressing the March for Life live via satellite. But does that mean that the media, who report on his every tweet, will finally give the pro-life marchers – and the millions of unborn they stand for – the coverage they deserve?

On Friday, more than 100,000 Americans are expected to attend the 45th March for Life. The rally condemns abortion around the anniversary of the Supreme Court’s 1973 Roe v. Wade decision, which legalized abortion in the U.S. But while the largest annual march in Washington, D.C. regularly attracts crowds from across the country, it’s frequently misrepresented or even censored by many in the media.

During their morning and evening news shows for the past five years, the broadcast networks have offered fewer than 24 minutes to the March for Life. To put that in perspective, the three networks spent more than three times that on the Women’s March in 2017 alone. 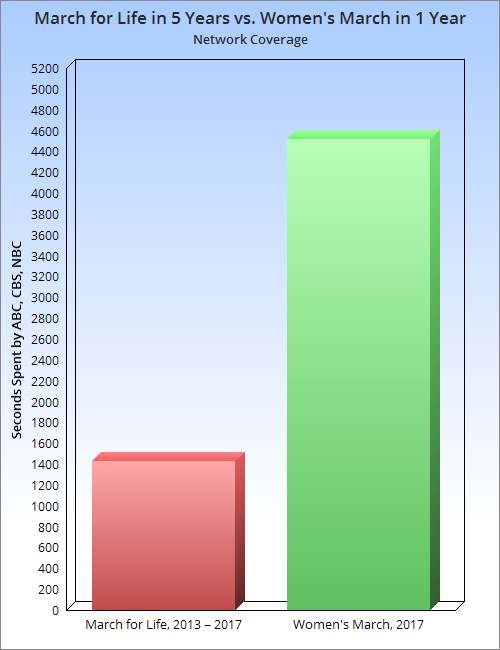 Abortion is one of the most controversial issues facing America, yet from 2013 to 2017, ABC, CBS and NBC combined have spent a mere 23 minutes, 45 seconds on the March for Life during their news shows.

Most of that coverage, 21 minutes, 52 seconds of it, came during last year’s March for Life in 2017. That was largely due to President Donald Trump’s influence. Trump, who had promised to appoint a pro-life Supreme Court justice, sent Vice President Mike Pence and White House counselor Kellyanne Conway to address the march. He also, in an interview with ABC anchor David Muir just days before the event, called out the media for ignoring the march in years prior.

The president knew what he was talking about. Before 2017, the network coverage was next to nothing. In 2016, the networks devoted an embarrassing 35 seconds (22 seconds following the march, 13 seconds beforehand) to the event. The previous year, only CBS mentioned the march, allotting just 15 seconds in 2015.

For 2013, the march attracted a mere 17 seconds from the network news shows. 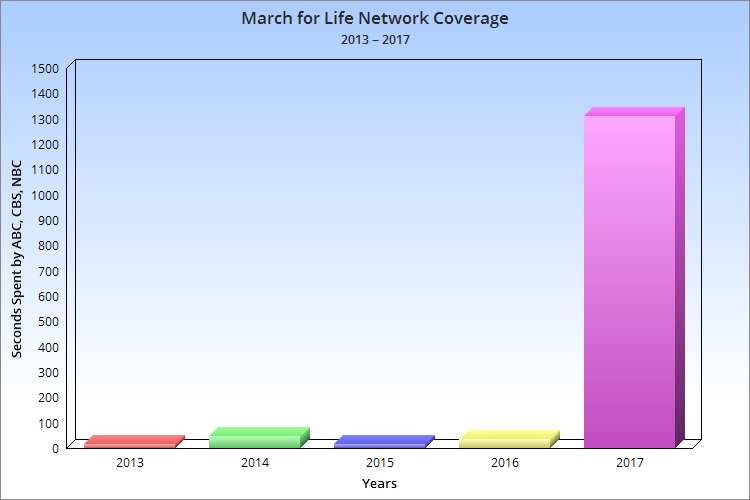 That makes up the total of 23 minutes, 45 seconds over five years. In contrast, the nets gifted 1 hour, 15 minutes, 18 seconds in one year fawning over the pro-abortion Women’s March in January 2017.

In response to the scarce coverage, the Media Research Center, along with other pro-life organizations, formed an Alliance for Fair Coverage of Life Issues in 2016 to demand the media “live up to the standards of journalistic integrity by covering life issues.”

The March for Life News Peg

The media have no excuse for ignoring the 45th annual March for Life on January 19. According to pro-life news outlets, President Donald Trump will address marchers live from the White House via satellite – the very first president to do so. 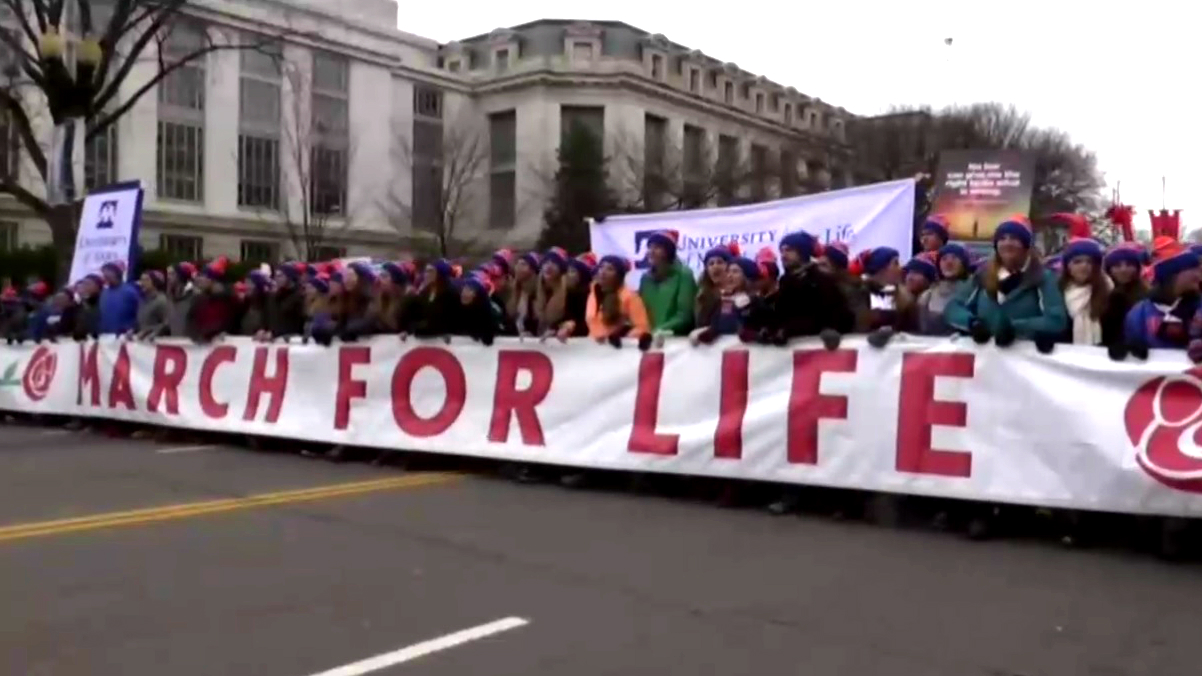 “Over the past year, the Trump administration has significantly advanced pro-life policy, and it is with great confidence that, under his leadership, we expect to see other pro-life achievements in the years to come,” Jeanne Mancini, the March for Life president, announced in a statement Wednesday. “We welcome our 45th President, Donald Trump, to the 45th annual March for Life."

But that’s just the start of what makes this year’s march newsworthy.

Planned Parenthood, the nation’s largest abortion provider, is under federal investigation by the Justice Department following the Center for Medical Progress (CMP) videos that exposed the trafficking of aborted baby parts. CMP released further footage in 2017, including one video where a Planned Parenthood representative implied that they kill baby survivors of abortion. Beginning in 2015, those videos sparked a rallying cry to defund Planned Parenthood – a discussion that continued through 2017.

In all, the taxpayer-funded abortion giant has ended the lives of more than 7.6 million babies since Roe v. Wade. But there’s hope: Even though one in three babies are aborted in this country’s most populated city, the national abortion rate is decreasing.

And polls also show the abortion industry is out of touch with the American public. A new January 17 Marist/Knights of Columbus poll found that Americans (three out of four) overwhelmingly support restrictions on abortion. And nearly half of Americans call abortion “morally wrong,” according to Gallup findings released last summer.

If that’s not enough, the sheer size of the march should be. Regardless of the weather, the march regularly attracts tens of thousands to hundreds of thousands from across the country. 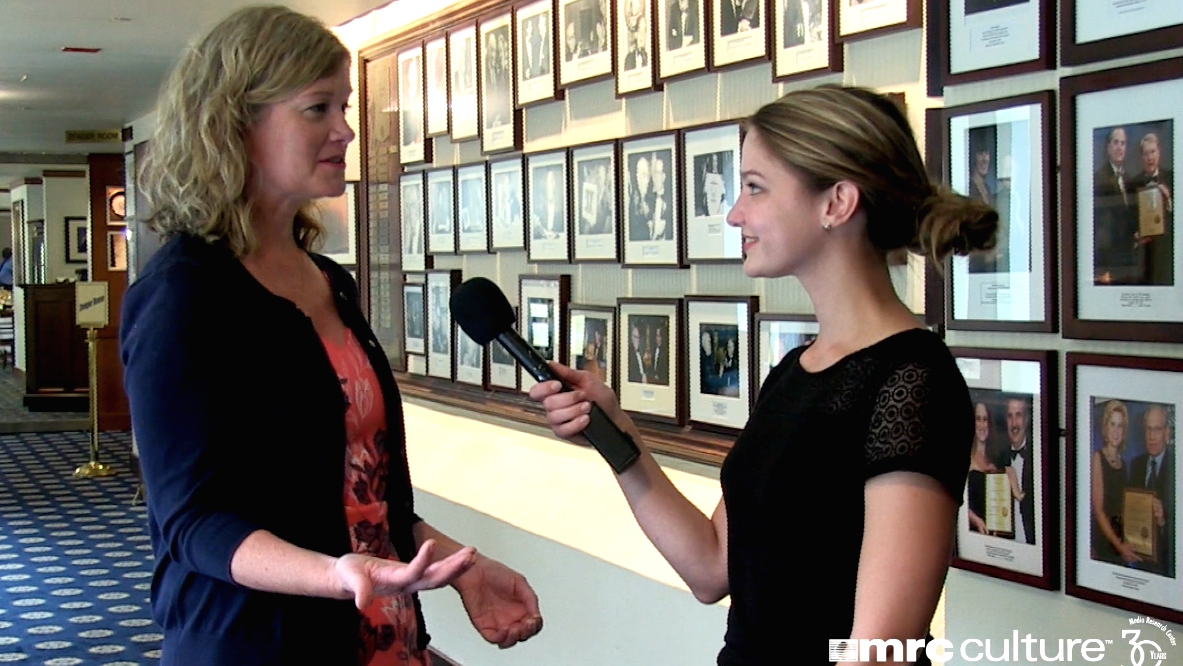 According to March for Life president Jeanne Mancini, the march represents the "largest human rights demonstration that happens annually around the world” combatting the “most significant human rights abuse of today.”

Mancini addressed media coverage while announcing the theme of this year’s March for Life: “Love Saves Lives.” In regards to the theme, Mancini told MRC Culture in October that she hoped for more coverage of pregnancy centers.

In past five years past, MRC Culture has captured the massive crowds attending the March for Life that the media so often refuse to report on.

Methodology: For the past five years (2013 – 2017), MRC Culture has watched the morning and evening news shows from the three broadcast networks (ABC, CBS and NBC) around the annual March for Life. To support the time tally, MRCC searched for the term “March for Life” on Nexis.